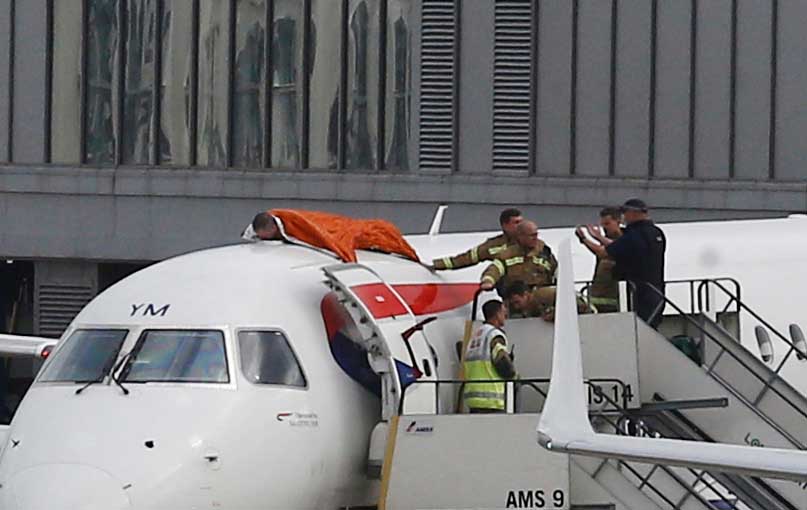 A protester lay on top of a plane while another forced a jet to turn around on the runway as climate change activists descended on London City Airport on Thursday, causing some flight disruption as the number of arrests this week topped 1,000.

Protest organisers Extinction Rebellion had vowed to occupy the airport‘s terminal and shut down operations for three days as part of its action in the British capital.

The airport said two flights were cancelled but it had run an almost complete schedule of flights.

London City is the capital’s fifth-biggest — and most central — airport, popular with business travellers, bankers and politicians for short-haul and regional routes.

A Reuters photographer saw one man, former paralympian cyclist James Brown, lay himself across the top of the body of a British Airways Embraer 190 jet.

“I managed to get on the roof,” Brown said in a video he posted online. “This is all about the climate and ecological crisis. We’re protesting against government inaction.”

He was eventually removed. The flight to Amsterdam had to be cancelled and a spokeswoman for BA said “we are investigating what happened as a matter of urgency”.

The group said they were protesting plans to expand the airport, which aims to have 6.5 million passengers a year by 2022 compared to 4.8 million in 2018, and which has said there could be demand for as many as 11 million by 2035.

On Thursday, 18,000 passengers were due to arrive or depart from the airport, with 286 flights scheduled. While some protesters got inside the terminal building, flights were continuing, though some were delayed.

An Aer Lingus plane was forced to stop taxiing and return to its gate when a passenger got up to give a speech about climate change.

“I’m extremely sorry to disturb everybody here. We have two generations of human civilisation left if we carry on doing what we’re doing,” the unnamed man said in a video of the incident, as he politely declined efforts by staff and passengers to get him to sit down.

Aer Lingus said that a passenger was removed from the flight to Dublin due to “disruptive behaviour on board”.

Extra security measures at the airport meant that most of the protesting happened well away from the runway.

“There are no longer any protesters outside the airport terminal but we continue to work with the Metropolitan Police to ensure that our passengers tonight and tomorrow have a safe and secure service,” airport chief executive Robert Sinclair said.

Protesters glued themselves to the terminal building, occupied a nearby Docklands Light Railway (DLR) station and blocked roads around the airport.

The airport action came as protesters try to shut down London with two weeks of civil disobedience, leading to a large number of arrests.

“We have now arrested over a thousand people,” said Laurence Taylor, the officer in charge of the police operation.

“We have been policing City Airport today where activists have attempted to try and disrupt the operation of the airport, including people outside and some interesting attempts airside, where one man had glued himself to the top of an aircraft. He has of course now been removed.”

The airport said it was “committed to building a more sustainable future for the airport and the aviation industry” and has said it will achieve net zero carbon emissions by 2050. British Airways owner IAG also pledged on Thursday to meet that emissions target.

Unions turning Gesy into a ‘theatre of the absurd’ minister says