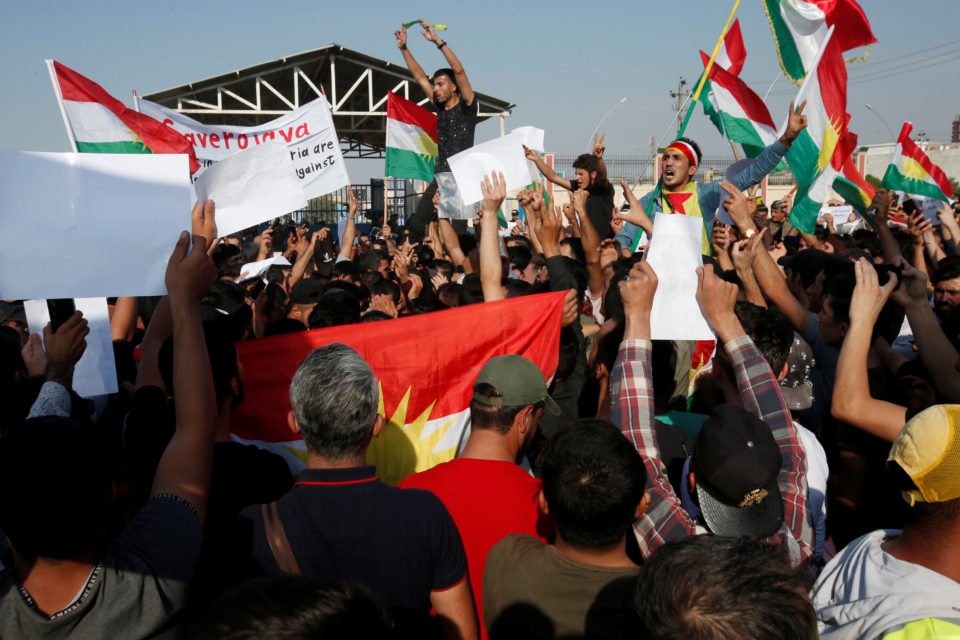 Syrian Kurds protest the Turkish offensive against Syria during a demonstration in front of the United Nation Headquarter in Erbil, Iraq

EVERYBODY betrays the Kurds. It’s an old Middle Eastern tradition. But given Donald Trump’s reputation for treachery, it’s astonishing how bad he is at it.

This particular betrayal got underway on Sunday night. After a telephone conversation with Turkey’s strongman president Recep Tayyip Erdogan, Trump declared that he had started pulling American troops out of Syria. It’s time for US forces “to get out of these ridiculous Endless Wars, many of them tribal,” he tweeted.

Did Trump realise that he was effectively giving Turkey permission to invade northern Syria and expel the Syrian Kurds from their homes? His own officials patiently explained that to him last December when he tried the same stunt for the first time, but maybe he forgot.

So they reminded him again, and by lunchtime, Monday Trump had changed his tune a bit. “If Turkey does anything that I, in my great and unmatched wisdom, consider to be off-limits, I will totally destroy and obliterate the Economy of Turkey,” he tweeted.

But Trump did not explain exactly what was ‘off-limits’. Did the Turkish president have a green light to invade northern Syria, or not? Erdogan is going ahead with the operation anyway, assuming that Trump’s threats are just the usual empty belligerence and bluster. It’s a safe assumption.

The weird thing is that Donald Trump’s basic attitude to wars in far places is pretty sound. Don’t invade Iraq. (Wrong enemy.) Don’t have a war with North Korea over nuclear weapons. (Make a deal.) Get American troops out of the Middle East. (Duh.) The problem is in the execution.

We saw it two weeks ago when Trump, having decided to pull American troops out of Afghanistan and sell his Afghan allies down the river, changed his mind at the last minute and cancelled a planned meeting at Camp David to sign a deal with the Taliban.

We saw it last week when a US delegation met the North Koreans in Sweden for their first talks on nuclear weapons in seven months. Trump declared the meeting a great success, but the North Koreans accused the Americans of showing up “empty-handed” and said they would not engage in “such sickening negotiations” again.

Calling Trump ‘transactional’ is just a polite way of saying that he has no long-term strategy at all – and he doesn’t understand that his adversaries often do have such strategies. So they run circles around him.

Erdogan’s strategy is quite clear. He says he is going to create a ‘safe zone’ in northern Syria by driving the ‘Kurdish terrorists’ out. It will be 480 km long and 30 km deep (much bigger than Lebanon), and in this strip just south of the Turkish border he will ‘resettle’ 2 million Syrian Arabs, more than half of the Syrian refugees now living in Turkey.

However, this plan sounds quite different when you translate it into plain English. The zone in question is already safe for the Kurdish people who live there and the Arab minority who live alongside them because they defeated the Islamic State extremists who were trying to conquer it. There are no terrorists there now.

The army that destroyed Islamic State was an alliance between the Syrian Kurdish group called the YPG and some smaller Arab militias in the region. It fought in close alliance with the United States and lost more than ten thousand killed. (Only seven American soldiers were killed in action in Syria.) It has now restored peace throughout the area, and there were no attacks on Turkey at any point in the war.

Erdogan’s aim is to drive all the Kurds living within 30 km of the border out of their homes and replace them with Arabic-speaking Syrian refugees. Almost all of those refugees will be from elsewhere in Syria, but they won’t get any choice in the matter either.

Why is Erdogan doing this? Because it will greatly shrink the number of Arab refugees in Turkey and because, having falsely portrayed the Syrian Kurds to his own supporters as a security threat, he can then claim credit for having solved the problem. It’s brutal and immoral, but it’s sound politics.

What can the Syrian Kurds do to save themselves? Only this. There will be a narrow space in the next week or two while the US troops are leaving the ‘safe zone’ and the Turks have not yet fully moved in.

The timing would be tricky, but if the Syrian Kurds invited Bashar Assad’s government in Damascus to reoccupy what is, after all, sovereign Syrian territory, perhaps that would protect them.

It would only work if the Russians are willing to back that strategy, but the Syrian Kurds have almost certainly been feeling Damascus out about this idea already because they could see Trump’s betrayal coming a mile off.

The Kurds could probably still get a fairly good deal on local autonomy from Damascus at this point – and Assad, for all his faults, is much likelier to stick to a deal once he makes it than Trump is.

Our View: Trump’s opened door for Turkey’s invasion of Syria