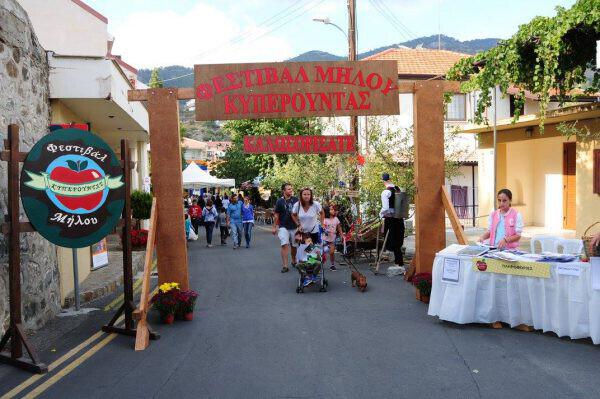 The festival will take place in the village square on Saturday and Sunday and admission is free. It’ll open its doors to the public at 11am on Saturday and the programme will start with the team of Radio Proto with a live link from 12pm to 2pm.

Dance and music performances will make up most of the festival on both days. The first music-dance performance will kick off at 3pm on the Saturday from the folklore group of the Municipality of Strovolos and a traditional music programme with the children of the melodic conservatory Kyperounta. Sunday will also be filled with an artistic programme starting from 11am until late but of course, it wouldn’t be an Apple Festival without some fruit stalls and treats.

Kiosks and stands selling apples and their products will fill the village square. Apple pies, jams, juice, ppallouze, fried apples and anything else you can think of that has the fruit as the main ingredient will be at the centre of the festival. But it’s not just edible goodies that will be around. Kiosks promoting apple juice, apple cider vinegar and liqueurs and beers with an apple base will also make an appearance.

Grab your snack and head to the three exhibitions on site. One is a photography exhibition featuring nothing but apples, the other exhibits old and modern machinery used to cultivate apple trees and the last exhibition displays various apple products of Kyperounta and their properties.

Turkey’s incursion in Syria may leave its own economy wounded