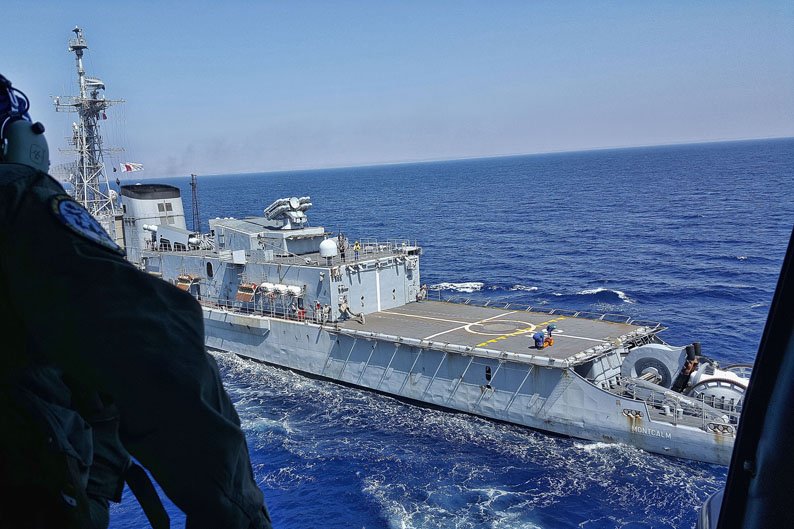 A French frigate was confirmed to be in Cyprus’ exclusive economic zone (EEZ) on Saturday as part of naval exercise between the two countries, as Turkish drillship Yavuz remains positioned in block 7, which is licensed to French company Total and Italy’s Eni.

Hours after the Greek Defence Minister Nikos Panagiotopoulos told media on Friday night that a French frigate was heading for block 7, on Saturday, a government source speaking to CNA, confirmed the presence of the frigate in Cyprus’ EEZ, underlining at the same time that Nicosia’s aim was not militarisation of the issue. The same source said that Nicosia was coordinating closely with EU member states, such as France and Italy.

In an interview with the Greek TV channel Skai on Friday night, Panagiotopoulos said his French counterpart Florence Parly informed him that Paris had sent a frigate. They discussed the possibility of Italy also sending one.

“French and Italian companies have been granted a licence for exploratory drillings in block 7”, said Panagiotopoulos, while adding that Europe must protect its “red lines”, which are being violated by Turkey.

“I am not suggesting that we should go to war […]. I am just saying that Europe must show somehow that it cannot tolerate this behavior, that there are certain red lines. The frigates, sent by France and Italy to block 7, is a first step. We must wait and see what kind of deterrence this move will have,” he said.

Eni CEO Claudio Descalzi said on Thursday his company would not drill off Cyprus if it meant having to deal with warships.

On Friday, Eni told the Cyprus government it was committed to the exploration of the island’s EEZ and its contractual engagements with the country. In reply to a Reuters request for comment on Eni’s position, Descalzi added the group was planning a joint exploration campaign in the first half of 2020 together with its French partner Total.

At the same time on Saturday, it was officially announced that a French-Cypriot naval exercise was underway off the coast, with the Cypriot government underlining the drill’s importance for bilateral cooperation with Paris, as well as in relation to the messages it would send about Cyprus’ sovereign rights in its EEZ.

The drill was announced by the French defence minister, who tweeted that French-Cypriot naval exercises were being held in Cypriot waters within the framework of the “excellent cooperation” between the two countries. “We wish to allow Cyprus, an EU member state, to be able to ensure its responsibilities in its sovereign waters,” Parly added.

Cypriot Defence Minister Savvas Angelides told CNA that “the naval drill is important, in the framework of Cypriot-French cooperation, while it is also sending a message in relation to exercising the sovereign rights of the Republic of Cyprus in its EEZ.”

“At the same time, we remain committed to our efforts to terminate Turkish illegal activities through political, diplomatic and legal means,” Angelides added.

Government Spokesman Prodromos Prodromou also referred to the French-Cypriot naval drill, saying it was part of the close cooperation between the two countries. “France reinforces the Republic of Cyprus is exercising its sovereign rights, in line with the unanimous stance of the EU,” Prodromou tweeted.

Turkey positioned its drillship, Yavuz – accompanied by two warships – within block 7 over a week ago which has been widely condemned by the EU and the remainder of the international community including the US and Russia. EU Council President Donald Tusk was in Cyprus on Friday and called on Turkey to refrain from drilling in Cyprus’ EEZ.

The EU is expected to put Turkish drilling activities on the agenda of the Council meeting next week. Cyprus hopes concrete measures will be taken against Ankara.

Block 7 was licensed to ENI and France’s Total in an agreement signed in Nicosia last month.

Turkey claims that approximately a third of block 7 – southwest of Cyprus – falls within its continental shelf.

Eni has already had run-ins with Turkish naval presence off Cyprus. In February 2018, a drillship leased by the company was prevented from reaching a drilling target in block 3, southeast of the island.

The vessel was blocked by Turkish warships, on the pretext they were conducting war games in the area. After a two-week standoff, the drillship withdrew and returned to port. Eni cancelled the operation and moved on to its next project in Egypt at the time.

Anastasiades ready for tripartite on Cyprus ‘as soon as possible’