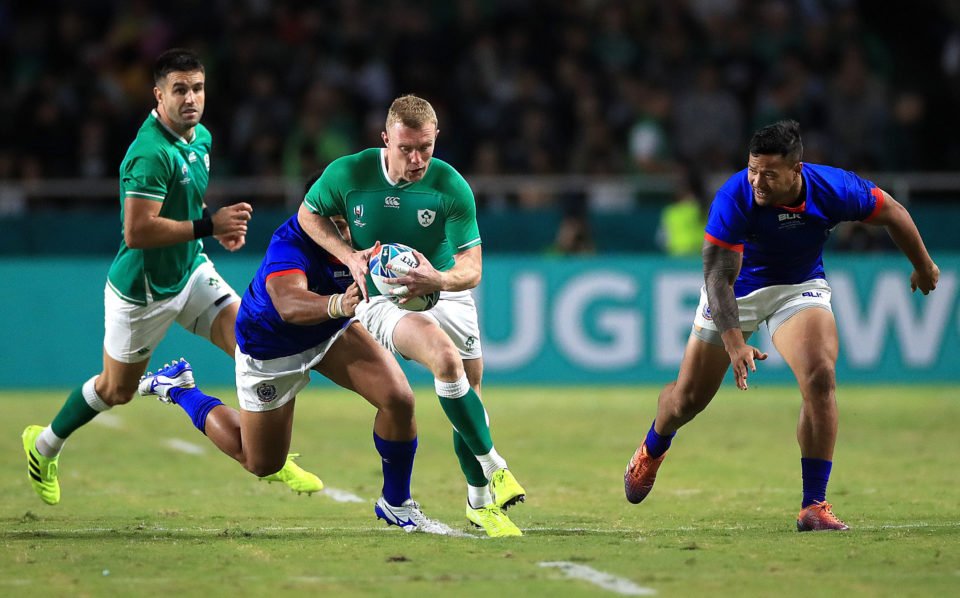 Ireland's Keith Earls in action during the match against Tonga.

Johnny Sexton’s two-try turn dragged 14-man Ireland to the World Cup quarter-finals but Bundee Aki’s red card in the 47-5 win over Samoa could end his tournament.

Ireland’s bonus-point victory in Fukuoka sealed a safe passage to the last eight, whatever happens in Japan and Scotland’s typhoon-threatened encounter on Sunday.

Joe Schmidt’s men moved top of Pool A and booked a quarter-final against either New Zealand or South Africa, thanks to two tries from Sexton and scores for Rory Best, Tadhg Furlong, Jordan Larmour, CJ Stander and Andrew Conway.

Aki’s red card for a high tackle on UJ Seuteni marred the victory, however, and now the centre born in New Zealand to Samoan parents will face a suspension.

The Connacht star had badly wanted to impress against his fatherland, but could now be banned for the remainder of the World Cup.

Ireland will not know their quarter-final opponents until the resolution of Sunday’s Yokohama clash between the Brave Blossoms and the Scots.

World Rugby will rule on Sunday morning whether that match can beat Typhoon Hagibis and be staged as planned.

A cancellation would see the game ruled a scoreless draw and both teams awarded two points, with Scotland eliminated and Japan topping the pool.

Ireland would then face New Zealand on Saturday, October 19 with Japan taking on the Springboks the following day.

Schmidt’s men were at least able to ride out the nation’s first World Cup red card with precious little issue.

Aki’s dismissal carried plenty of parallels with CJ Stander’s red card against his native South Africa in 2016. Stander was left gutted to be sent off in his first match against his homeland, but even then Ireland prevailed, winning 26-20 in the first Test of that summer series.

So it proved in Fukuoka too, with Ireland moving on easily enough but still counting the cost.

Samoa hooker Seilala Lam was sin-binned for a high shot on Jacob Stockdale, paving the way for Ireland to strike again.

Another penalty lineout maul pushed Ireland into the 22, and Furlong bulldozed through four defenders to claim a fine try.

James Ryan rescued Ireland with a stunning lineout steal in his own 22, and that set Ireland en route to try number three, with Larmour breaking the line and sending Sexton home.

Sexton’s third conversion had Ireland 21-0 ahead and cruising at the end of the first quarter.

Despite Jack Lam squeezing in for a Samoa try Ireland were still comfortable – but then everything changed with Aki’s red card.

The teak-tough centre of Samoan descent thundered into Seuteni, connected with his head – and was standing upright enough in the process to warrant a straight dismissal.

And so Ireland were left to battle more than 50 minutes with 14 men, in a huge test of their World Cup resolve.

But just as when Stander was sent off against South Africa in 2016, so here too Ireland rode out Aki’s red card.

Schmidt’s side even stole the bonus-point score before the break, Conor Murray sneaking down a poorly-defended blindside and sending Sexton in for his second try of the night.

Ireland extended that 26-5 interval lead when Larmour crossed on the right flanker, courtesy of more fine work from Murray and Sexton.

TJ Ioane was then sin-binned for repeated Samoan infringement, paving the way for another Ireland score.

Replacement lock Jean Kleyn was denied a try, held up over the line – but on the very next attack his Munster team-mate Stander bulldozed over.