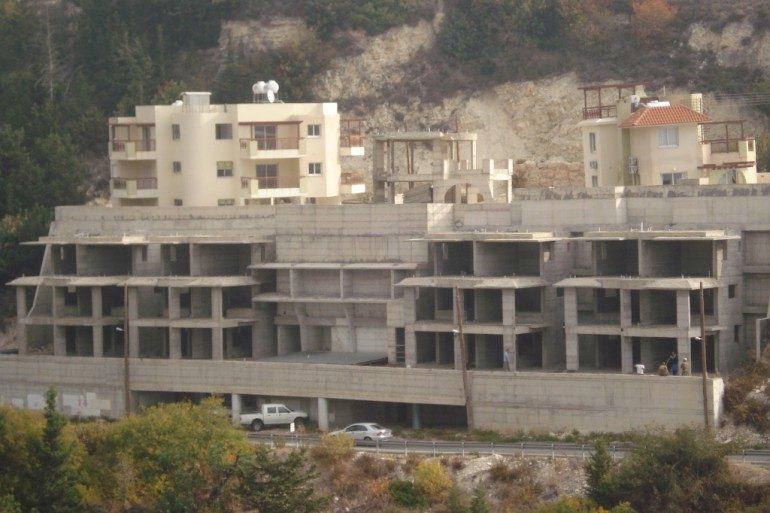 Tala residents are increasingly frustrated that a crumbling hillside development remains in place months after a demolition order was issued by the court and fear the rapidly approaching winter weather may cause it to collapse completely.

The court gave the developer until the end of July to demolish the subsiding and only partially completed complex of apartments and villas but nothing happened, so the local authorities had to put the work out to tender, according to the Paphos District Office.

Huge cracks are visible in the buildings which are tilting, while ripples, cracks and holes on the busy road beneath have meant it has had to be closed to traffic.

The closure has adversely affected many residents, effectively ‘cutting them off’.

One elderly resident, who wished to remain unnamed, said that he is fearful to drive, as the traffic diversion consists of a narrow, steep and twisting ‘back road’ with a sheer side and ‘blind’ corners.

The road beneath the complex which connects, Tala, Koili, Zelemenos and Kamares village has been closed since April 6.

The demolition is expected to take around two months once it starts; around one month to tear the building down and a further month to repair the hillside and the road.

“I have been informed that the tender process has been completed and the demolition can proceed and that it will be completed by the end of this year or January 2020. We are worried because if there is rain like last year, it could all come crashing down,” said Kamares resident, Irina Yakimovitch said.

All residents and owners in the complete part of the complex were forced to leave after authorities deemed the properties unfit for habitation and the developers made arrangements with the property buyers to compensate them but have failed to oversee its demolition.

Tala community leader, Areti Pieridou added that work should start ‘very soon’, otherwise winter would ‘catch up’ with them.

“I spoke to the district office last week, but there was still no firm start date,” she said.

Residents of the area have already signed a petition for the demolition and repair of the road and hillside and will meet at the end of this month to examine any progress and decide what further action if any they will take.

“Some elderly residents in Kamares have decided to sell their houses as they have had enough of the crazy diversions. It is badly affecting their social life and they stay at home in the evenings instead of going out, as they are afraid to drive along the twisting, turning narrow road,” said Yakimovitch.

She expressed her frustration and hopes that the authorities aren’t lying that work will get underway ‘soon’.

“The traffic is now very bad and having to use the small back road, as so many people are back in their homes and at school. It’s so frustrating that nothing has changed, except the building and road has suffered even more damage. No work is visible and we are all still waiting. It seems to be moving and is very dangerous,” she said.

Play to hit the schools about bullying