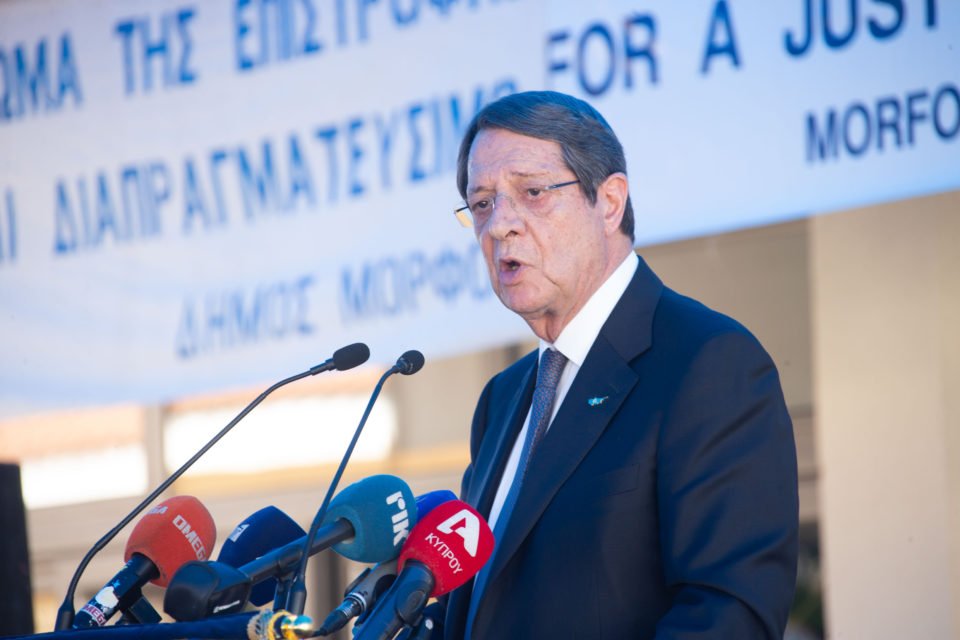 President Nicos Anastasiades said on Sunday he hoped Cyprus’ “voice is heard loudly” and decisions would be taken at the European Council meeting on Thursday with regard to Turkey’s violation of Cyprus’ exclusive economic zone (EEZ).

The Council is to address Turkey’s violations on October 17, along with a discussion on Ankara’s military intervention in northern Syria.

Addressing the 39th annual anti-occupation event organised by the Morphou municipality, which took place in Astromeritis in the Nicosia district, Anastasiades said he hoped Cyprus’ “voice is heard loudly” at the Council meeting on Thursday “and decisions will be taken with regards to what Turkey is doing within Cyprus EEZ, in addition to what it is doing in violation of international law in Syria”. “We are all witnessing now this new Turkish atrocity,” he added.

“Excluding the clear position of the EU, the majority of small countries who feel their only weapon of protection in international law, unfortunately the powerful permanent members of the Security Council, through their attitude, have only spread frustration leading to a lack of confidence in the goals and purposes for which the UN was set up.”

Anastasiades also said he was determined to work for a Cyprus solution but not for “any solution”, saying there were limits to concessions.

“I will work tirelessly to finally achieve what we all seek, a truly peaceful and viable solution to the Cyprus problem in a European environment,” he added.

He said he was willing and ready and had made it clear to UN Secretary-General Antonio Guterres, that he was prepared to meet anywhere for a tripartite meeting with Guterres and Turkish Cypriot leader Mustafa Akinci.
“I do not object to the dates but there are others who raise objections,” he said in a pointed dig at Turkey.

“For those who say we are avoiding dialogue we must do everything to convince the SG that we want dialogue,” the president said, adding that one of his thoughts was to send an invitation to Guterres and Akinci and invite them to a dialogue.

If it was up to him, he said that is what he would do but Turkey was trying to undermine the process with its illegal actions in the island’s EEZ at a time when the UN chief was trying to facilitate a resumption of talks, he said.

Ankara sent its drillship Yavuz to Cyprus’ block 7 ten days ago, an area of the EEZ where Italy’s Eni and France’s Total have a concession to drill.

“Turkey’s stance is, in essence, a second invasion, this time of the EEZ of the Republic of Cyprus,” he added.
What was needed now, Anastasiades, was a climate of consensus and confidence building, as well as the creation of an environment that would allow conditions for the resumption of an effective dialogue.
But, he added, there were “limits to retreats” and there had been many retreats by the Greek Cypriot side but he did not want to enter the blame game

“What is needed today is unity because there are visible dangers,” he said.