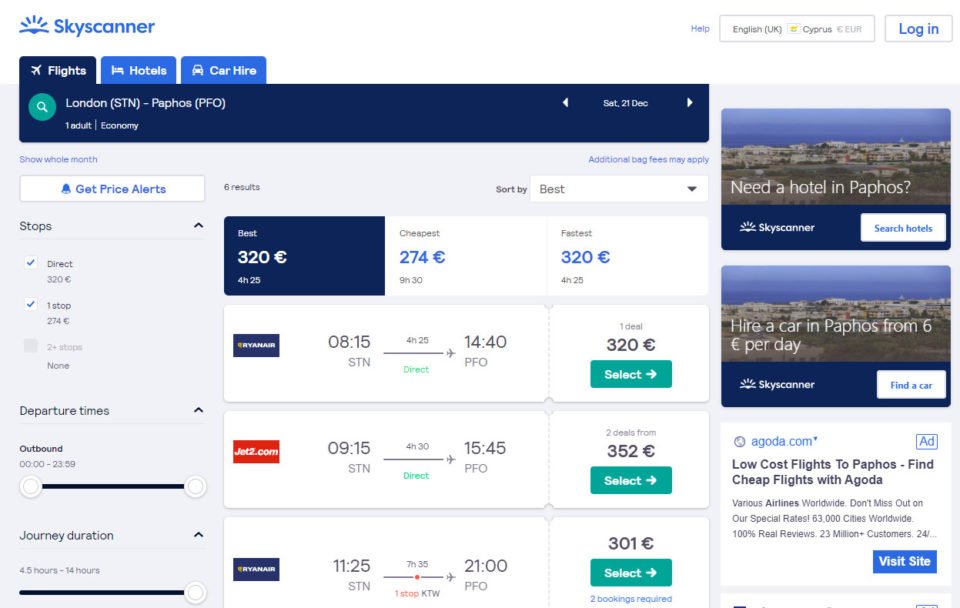 Prices for December 21 from Stansted to Paphos not including luggage.

The aftermath of the collapse of Thomas Cook is having a big impact on parents of the nearly 9,000 students studying in the UK wanting to book flights for their children to come home this Christmas.

As prices spiral in the weeks leading up to Christmas, booking seats relatively early is always advised, but this year there are fewer flights which is being reflected in the prices.

Passengers report that flights from the UK are much more expensive than ever after last month’s collapse of Thomas Cook preceded by the those of Cobalt and Monarch, all of which had direct flights to Cyprus.

A quick glance at flight comparison websites shows the cheapest return flights from London and Manchester for the typical student Christmas holiday dates of Saturday, December 21 and returning Saturday, January 4 range from between €622 and €678, including luggage.

“Prices have definitely gone up a lot, though one cannot say exactly by how much, as there are no statistics,” head of the Association of Cyprus Travel Agents (Acta) Dinos Kakkouras told the Sunday Mail. “The main reason is that Thomas Cook had 25 flights per week and the number of seats has decreased. There are only a few new flights and all travellers, students, tourists and businessmen have to pay much more.”

However, he added that travel agents and airlines look to the future when it comes to prices and there is no real comparison to other years.

The consumer association explains why it does not have such data.

“Prices change from hour to hour and from day to day and it is not possible to record them,” said the president of the Consumers Association Marios Droushiotis.

The association’s figures though do indicate the severe shock the market suffered following the collapse of travel giant Thomas Cook on September 23.

While cheap flights leaving Cyprus on October 14 and returning from London on October 20 were priced between €197 and €209 when booked on July 23, just two months later tickets for the same dates were offered from a minimum of €345 to €375.

Certainly there are fewer choices, which always means higher prices, but on the other hand, it is still possible to find deals, if you can be a little flexible and have the patience to look.

But many students, limited by their term dates, cannot be flexible unless they are either willing to cut their holiday very short or miss some days of classes at the end of their first term and the beginning of their second.

“We don’t have a lot of choices, the students have to be back at a certain date early in January and have to leave after the holidays start and before Christmas,” a mother whose two sons study in the UK said.

Only a few dates are extremely expensive. If you take Ryanair out of Stansted on Tuesday, December 17, before many students have finished classes, for example, a flight to Paphos will set you back GBP 90 (€110), including luggage. But from then on prices quickly spiral until December 21 – a Saturday – when you will have to pay GBP 312 (€347), one way.

This is indeed a hefty amount, especially if the student has got to fly back two weeks later. On both Saturday and Sunday, January 4 and 5 – most classes start on January 6 – one would have to pay €275 (with luggage) to get back to Stansted from Paphos. Choosing those two days for travelling to and fro means a total of €622.

However, by January 10, the price for the flight back has plummeted to €70, thus the return flight from December 17 until January 10 would be €180! (All prices are with 20 kilos luggage)

For those who study in the north of England, the story is worse. A flight from Manchester to Paphos and back with easyJet from December 17 until January 10 – with 15 kilos luggage – was listed as €342 this week. The same flight from December 21 until January 4 was €678. For those who prefer to travel from Larnaca, there are direct flights with the airline to Liverpool twice a week.

Departure points and destinations are nearly as crucial as dates of flights.

One mother who looked at return flights from Bristol to Larnaca was flabbergasted to learn that a ticket leaving on December 21 and coming back on January 4 was around €1,000.

It was not even convenient as it entailed several stops, and 14.25 hours to go and 28 hours to come back. Clearly the only option was to travel to and from London to Bristol by bus or train and book a flight from a London airport.

While Christmas flights will always be pricey, the time you book is crucial.

According to data by online travel agent Skyscanner, used by 100 million people per month, the best time to buy a Christmas flight is between the weeks of August 10 and November 19, though clearly August is better than November by which time all the lower price allocated seats will have gone.

“Booking during this time period could save you an estimated 3 per cent on your Christmas flights,” said the travel agency, which based its findings on prices of recent years.

Last-minute flights are not a good idea, but neither is it wise to book too far ahead. Bookings made a week before Christmas are 9 per cent above average and bookings made before August are also more expensive than those made between August and November.

As booking early on is not an option for parents and students for the upcoming Christmas holiday anymore, is booking later a better idea, as more flights might be added for the festive period?

“The earlier they book the better,” Kakkouras replied firmly. “It is not easy to add new flights at this time. Airlines schedule their flights ahead and passengers should not count on extra flights.”

Tips: How to find the cheapest flight

Sign up for alerts from comparison websites such as https://www.skyscanner.net/  – they will notify you when prices change

Be flexible with your dates but if you know when and where you are going, book – fares rarely get cheaper

Keep in mind how the cost and inconvenience of getting to specific airports – passengers travelling to and from Paphos who live in other districts, for example, should consider prices and timetables of airport buses which do not run as often as from Larnaca, and the petrol costs and inconvenience of driving there often in the middle of the night

Our View: Bank union resorting to strikes to preserve power

Coronavirus: Cyprus patients to be included in global trial of Japanese drug