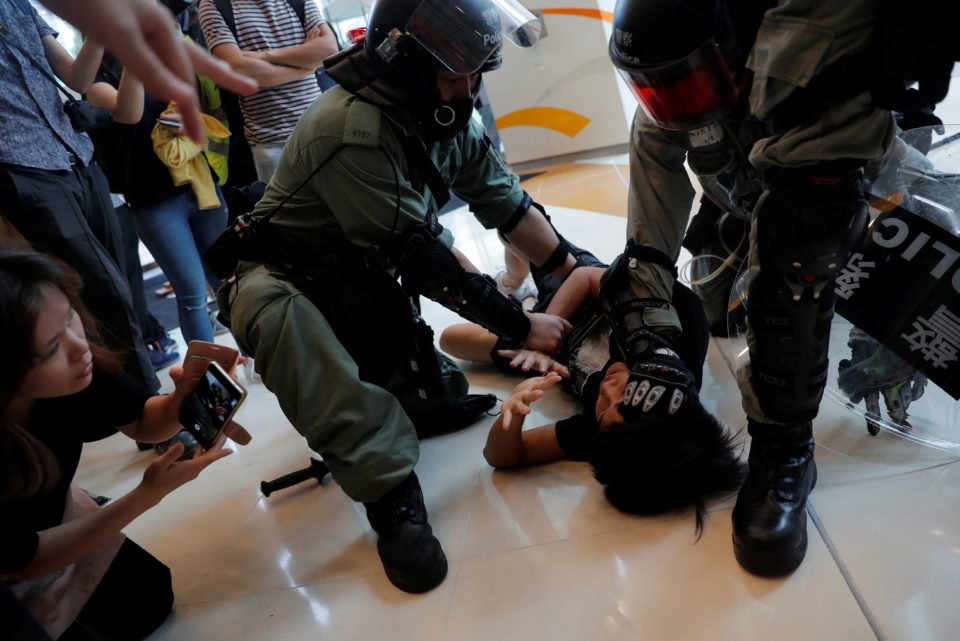 Hong Kong pro-democracy activists staged a cat-and-mouse game with riot police on Sunday, mounting protests in several shopping malls and chanting slogans such as “Free Hong Kong” until police arrived and then dispersing among weekend shoppers.

Some protesters vandalised shops and police made several arrests but in most cases the protests were peaceful. The young protesters, many wearing face masks, were often supported by Sunday shoppers out for lunch.

In one incident, a group of 50 shoppers inside a mall, none wearing masks, faced off against riot police outside the mall doors, chanting “Hong Kong police mafia”. The shoppers cheered and clapped when police drove off.

Hong Kong‘s police, once praised as “Asia’s finest”, have been accused of using excessive force in dealing with protesters and have lost the confidence and respect of many Hong Kongers.

“Police officers have used minimum necessary force to disperse protesters, including the deployment of tear gas. We warn the rioters to stop their illegal acts immediately,” police said in a statement on Sunday.

Hong Kong has been battered by four months of often massive and violent protests against what is seen as Beijing’s tightening grip on the Chinese-ruled city, and more protests are planned for Sunday.

The protests started in opposition to a now-abandoned extradition bill but have widened into a pro-democracy movement and an outlet for anger at social inequality in the city, which boasts some of the world’s most expensive real estate.

The unrest has plunged the city into its worst crisis since Britain handed it back to China in 1997 and poses the biggest popular challenge to Chinese President Xi Jinping since he came to power in 2012.

“Hong Kong used to be a prosperous city and now she has become a police state. Hong Kong is my home. We should protect her. We should resist,” said a 70-year-old who only gave his last name, Hui.

He was part of a group of 60- to 70-year-olds on Nathan Road, Kowloon, cheering the protesters, urging them to block the road and warning them when police were returning.

Riot police entered some malls and metro stations and marched down roads in a show of force as protesters erected makeshift road barriers. Police made several arrests, chasing down individual protesters in the street.

“I think the police have been using their power to suppress the citizens. That’s why more and more young children come out and protest against the government and the police. Those being arrested don’t have human rights. This is not fair,” said resident Mary Lam, 26.

Petrol bombs were thrown inside a Hong Kong metro rail station on Saturday but no one was injured, the government said.

Protesters scaled the city’s Lion Rock peak and hoisted a large statue they called “Lady Liberty” early on Sunday to rally anti-government activists ahead of more planned demonstrations in the Asian financial hub.

The three-metre (9-feet) statue, wearing a gas mask, helmet and protective goggles, was carried up the 500-metre (1,500-feet) peak in the dead of night by several dozen protesters, some wearing head lamps, during an overnight thunderstorm.

It held a black banner that read “Revolution of our time, Liberate Hong Kong” and could be seen from the city below.

The statue represented an injured woman protester believed by activists to have been shot in the eye by a police projectile. One of the protesters told Reuters he hoped it would inspire Hong Kong people to keep fighting.

“We are telling people that you mustn’t give up. All problems can be resolved with Hong Kong people’s persistence and hard work to reach our aims,” he said.

Protesters have targeted Chinese banks and shops with links to mainland China. A group wielding hammers damaged a Huawei store on Sunday.

Demonstrators believe China has been eroding Hong Kong‘s freedoms, guaranteed under the “one country, two systems” formula introduced with the 1997 handover.

The now-withdrawn extradition bill, under which residents would have been sent to Communist-controlled mainland courts, was seen as the latest move to tighten control.

China denies the accusation and says foreign countries, including Britain and the United States, are fomenting unrest.

The Hong Kong government introduced colonial-era emergency laws last week to ban the wearing of face masks at public rallies, a move that sparked some of the worst violence since the unrest started in June.

Protesters accuse police of using excessive force, claims which they deny. Two protesters have been shot and wounded during skirmishes with police.

Hong Kong is facing its first recession in a decade due to the protests, with tourism and retail hardest hit.