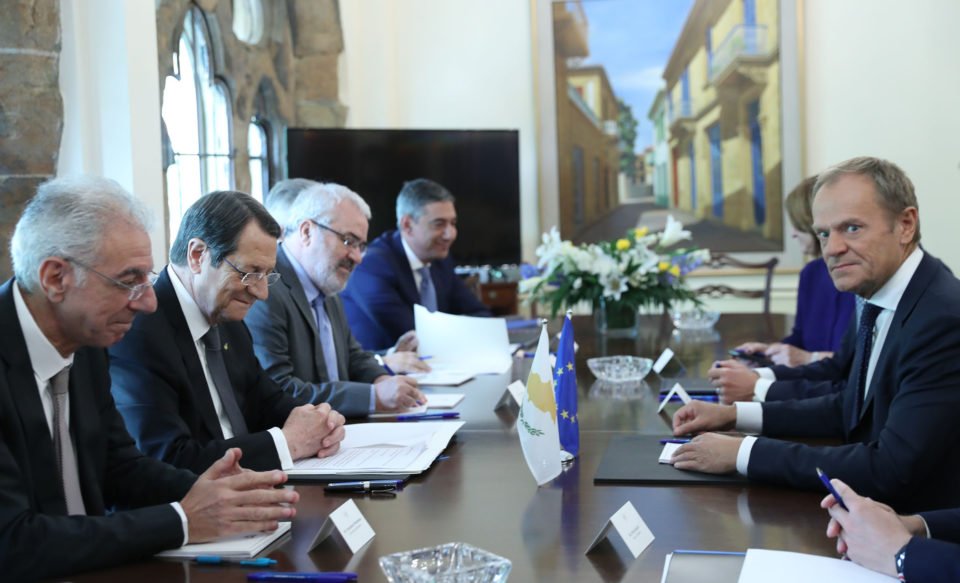 Local art in the room of the presidential palace where President Anastasiades met president of the European Council Donald Tusk on Friday.

Artists are threatening legal action unless the government, municipalities and semi-government organisations start implementing a 2009 law which stipulates that one per cent of the construction budget of each new public building is spent on purchasing local artwork.

Cyta, the Electricity Authority, Nicosia general hospital and even the Cyprus Theatre Organisation (Thok) – which as part of the cultural community might be expected to know better – are just some of those guilty of failing to meet their artistic obligations according to the Visual Artists Association (EIKA).

A 2017 study conducted by EIKA, which has for years been pushing for the implementation of the law, found that at that point in time, 63 public buildings did not abide by the legislation, bringing the total sum owed to the local art market by the state to over €2m.

“Today the figure is definitely higher,” EIKA chairwoman Monica Asimenou told the Sunday Mail, as the law involves the placement of local art in new government and municipal buildings, schools and other public buildings.

The aim of the law is to support local artists but also to enrich dull, austere public buildings and provide wider access to art.

“There’s a reason why the law was established,” visual artist Othonas Charalambous told the Sunday Mail.

“People benefit from art in their daily lives, and when you think about public spaces – schools, courtrooms, municipalities – and their authoritarian aesthetic, as I call it, the open call that is required by the law means artists are given the chance to explore ways of bringing in what they think is missing.”

The House of Representatives education committee is scheduled to discuss ways to push for the implementation of this disregarded law passed 10 years ago.

The legislation, as amended in 2009, states that “during the budget preparation period for the construction of any public building, the entity constructing the building must allocate at least 1 per cent of the total cost of the building’s construction to its enrichment with artwork”.

A previous form of the law in place since 1992 held the cultural services of the education ministry responsible for implementing the legislation, leaving it overburdened. It was only able to arrange for the placement of artwork in around 15 public buildings out of the 50 that were built by 2009.

When the law was amended in 2009, the responsibility was shifted onto the entity constructing the building, be it the state, municipalities, local authorities, or semi-governmental organisations, with the ministry of education and culture remaining responsible for oversight.

An important change was that for each new public building, the entity would form a committee that would be responsible for securing the artwork through launching an open call, open to any artist to apply.

Ironically, the improved amendments law left the task of installing works of art in public buildings in what appears to be the indifferent hands of the government entities, with the ministry appearing negligent in its role in overseeing the law’s implementation.
“We’ve tried,” Louli Michaelidou, an official of the cultural service, told the Sunday Mail. “The service has made multiple efforts to motivate a number of the ministers who have come and gone throughout the years to see to the implementation of law and order.

“Artists should get what they deserve – retrospectively what they are owed, too,” Michaelides stressed.

EIKA told the Sunday Mail that in July it moved to take legal steps in the form of formal letters which were sent to the public bodies that evaded the law, demanding that they launch tenders for the purchase of artwork.

These included Cyta, the Electricity Authority, the Latsia municipality and the Nicosia general hospital.

Perhaps more surprisingly, the Cyprus Theatre Organisation (Thok) also came into the spotlight in May, after a letter sent to the organisation by two artists, Maria Loizidou and Nicos Kouroushis, exposed that the organisation was also among the pool of public entities that failed to abide by the law, the main purpose of which is to support the local art world.

In their letter dated May 20, the artists demanded that Thok proceed within 20 days to launch a tender for the purchase of works of art, which in view of the cost of construction of its new theatre – a sum of €20.5m – Thok is required to purchase artwork worth €205,000.

Though Thok had initially responded positively, with its board of directors unanimously agreeing on June 3 to move forward with a tender, Asimenou said that it has yet to do so for financial reasons.

Other public entities will also be receiving a letter soon, EIKA said, either because they have failed to abide by their legal responsibilities for existing buildings, or so that they can make sure to do so in any new buildings currently in the pipeline.

EIKA said that it has received some assurances that the law will be implemented for planned constructions, but the association remains adamant that since the law has been in place since 2009, “it must be implemented in existing public buildings as well.”

The association said the issue was suggested for discussion among the House education committee in September. This did not happen and according to Asimenou it remains unclear when the committee will begin examining the matter.

She said the association is fully prepared to step up measures through filing lawsuits if all those involved do not assume their legal responsibilities.

Gas has a future but must cut costs, Cyprus could see delay amid EEZ furore

Get in the Halloween spirit with Nostalgia Parties