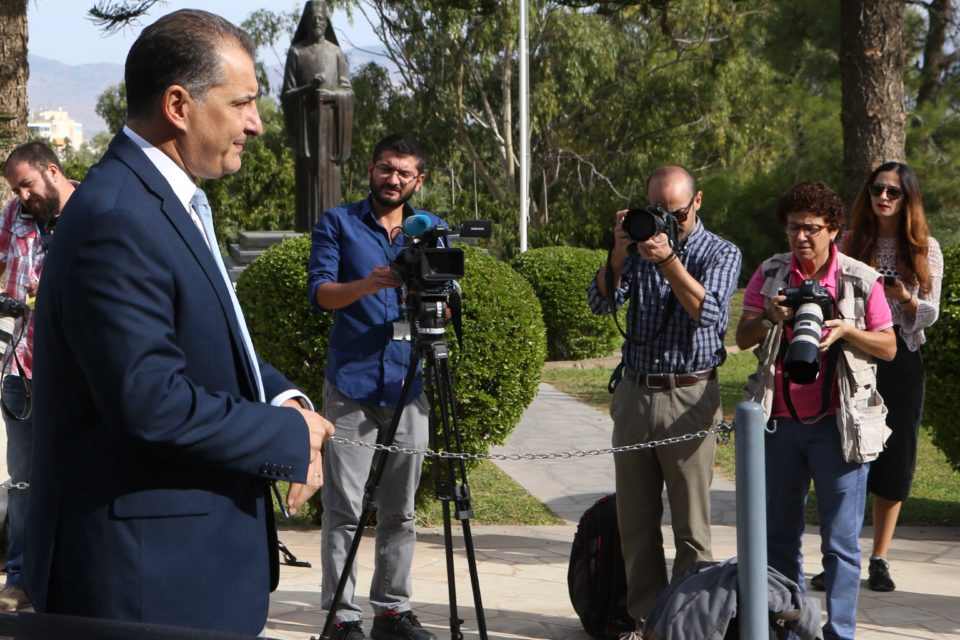 TO SAY the Estia Scheme, which rewards people for not repaying their housing loans, has not gone according to plan, would be something of an understatement. Since the scheme was introduced, on September 2, a meagre 104 completed applications and 250 incomplete ones were submitted, while the banks had calculated about 12,000 debt defaulters were eligible for state assistance.

It is a tiny number that applied for the scheme, which would reward defaulters with a reduction of their loans and state assistance for their repayments. The scheme is for a primary residence valued up to €350,000, while the defaulter’s net assets should not exceed €250,000 and annual household income of up to 60K.

Deputies were so concerned about the lack of interest that the House finance committee met last Monday to find out the reasons for the defaulters’ indifference. They attributed the trickle of applications to the complexity of the procedure; the application form was more than 30 pages long, while some 40 different documents had to be secured and attached, the committee heard.

Collecting these documents could cost as much as a four-digit figure said Edek leader Dr Sizopoulos but he stopped short of suggesting the taxpayer picked up the bill. Cyprus News Agency, however, reported there were thoughts of extending the November 15 deadline and the lands and surveys department not charging any fees for providing documents to the unjustly treated defaulters.

Perhaps the government should also hire some staff to fill in the application forms gratis for them in order to boost application numbers. What sort of society are we when we refuse to provide support to people refusing to honour their signature and repay their loans?

IN ANY normal country – not one that has foreign guarantor powers – if people were offered a 15 to 20 per cent haircut on their housing loan and have 30 per cent of their monthly instalment paid by the state, they would be prepared to fill in a 500-page application form, go to 50 departments for documents and have sex with the bank manager as well.

I mention this for the sake of argument because in a normal country someone who has not made any repayment on their mortgage for a few months – let alone several years – would have been kicked out of the house rather than being begged by the government to accept its assistance. Politicians have been actually making public pleas to defaulters to apply to Estia.

The chairman of the House finance committee, Angelos Votsis, warned non-payers not to expect a more attractive Estia, mark 2 scheme in the future. In fact, at a meeting at the finance ministry on Thursday, attended by anxious bank CEOs, it was decided there would be a campaign to promote the scheme, that would make it clear there would not be a second scheme.

The message will be ‘we beg you to take the taxpayer’s money, now because there will not be a second chance.’

Pandering politicians have made the defaulters feel so entitled they are justified in holding out for a second scheme in which the government will undertake to cover the entire monthly loan repayment. Surely, when a scheme is unsuccessful it has to be made more enticing.

And if that doesn’t happen, the defaulters would be happy to stick to the old scheme by which they do not pay anything to the bank, protected by the law that prevents repossession of the primary residence.

What are the chances that the banks would be permitted to foreclose 12,000 primary residences by our caring and compassionate politicians, because the poor old defaulters refused to apply to Estia? Less than zero. Dr Sizopoulos gave an indication of how politicians view the defaulters as victims, by insisting the scheme was not working because it was weighted in favour the banks.

Nobody can accuse our politicians of ever missing an opportunity to stand logic on its head.

OUR SOCIETY has a variety of ways of assisting lawbreakers. An example of how the justice system does this, perhaps unintentionally, was given in Thursday’s Politis, which reported how it took eight years and an appeal to the Supreme Court for a correct ruling to be issued in a straightforward case regarding a bounced cheque.

In 2011 a company, which had sold timber products and was paid the €10,000 bill with a cheque that bounced, took the payer to court. The district court, in its wisdom, found the company that had issued the cheque guilty but acquitted the man that signed it “on the grounds of doubts”.

The man who signed it was the director of the company and its sole owner but the court acquitted him because it ruled there was “no concrete evidence that he was the person who had financial control of the company and judging that he did not have at the time of signing them (the cheques), the necessary knowledge that they would not be paid, or intention….”

The supreme court, to which the plaintiff appealed after the acquittal made no bones about the stupidity of the judge that issued the ruling in its own decision issued a few days ago. “Who could have had financial control of the company, as it was put, if not the only director and essentially its only owner? How had it not been proved that he had no knowledge of the dire situation of the (bank) account for which he was the only authorised person, given he received monthly information?”

As for the “doubts” expressed by the district court, they related to an error in the address number of the defendant’s premises on the charge sheet, which the Supreme Court said, “was completely irrelevant to the testimony.”

Why would anyone settle their debts on time when the courts grant credit periods of eight years? For house repossession procedures it is longer, about 10 years.

PRESIDENT Trump had in the past referred to himself as a “very stable genius”, as a response to claims he was suffering from mental health problems (the politically correct way of referring to someone that is completely mad), made in Michael Wolff’s book Fire and Fury. The funny thing was that he was not even being funny or ironic.

He has also referred to himself as “the chosen one” and “so great looking and smart.” A few days ago, in defence of his colossally reckless decision to withdraw US troops from northeast Syria and allow Turkey to invade the area and attack Kurdish forces, supposedly to set up a safe zone, he tweeted:

“As I have stated strongly before, and just to reiterate, if Turkey does anything that I, in my great and unmatched wisdom, consider to be off limits, I will totally destroy and obliterate the Economy of Turkey (I’ve done before!).”

BACK in the days of Makarios, when Greece’s government refused to follow his scheming or back his demagoguery, unflattering reports would appear in the Cypriot and Greek press criticising Athens for letting down poor Cyprus and not defending the interests of Hellenism as defined by our omniscient Archbishop. The sources were always Makarios’ courtiers if not himself.

An interview with the former foreign minister of Greece, Nicos Kotzias, that appeared in last Monday’s Phil was a throwback to the Makarios period. Kotzias, hailed as a national hero in Kyproulla for his supporting role in thwarting the 2017 settlement efforts, censured the New Democracy government for “sending Turkey messages of weakness and indifference.”

He told Phil: “The government of New Democracy does not understand that Greece has obligations to Cyprus greater than empty words.”

What was he exactly proposing Greece’s government did? He said it should mobilise Greek public opinion (more effective than 10 warships), defend the rights of Hellenism as whole and “take practical measures, defensive and diplomatic, aimed at averting a second occupation of Cyprus, that is, its sovereignty in the sea and the EEZ.” Like all hot-air salesmen he did not elaborate.

Had our foreign ministry asked him to take a stand against Greece’s government or was it a patriotic initiative of Phil, feeling nostalgic for Makarios’ days?

WE DO NOT need Greece to come to our defence. Archbishop Chrys, after a meeting with Prez Nik on Wednesday, offered hope to our country, with an astute geostrategic analysis, which claimed that Turkey “is walking a tightrope and at some point, will fall off.”

He also gave his recipe for our victory. “We must not lose our nerve, we must take care of our economy and our National Guard so that Turkey knows in advance that any move would go against it. Turkey might win five but will lose 10. It will therefore not dare do anything.”

What about daring to carry out exploratory drilling in block 7 that is licensed to Eni and Total? “They have just gone for a stroll. They are in no position to discover anything and in no position to administer it,” said the Archbishop, who could give Donald Trump a run for his money in the great and unmatched wisdom stakes.

SPEAKING of drilling, our government was not very happy to hear the CEO of the Italian energy firm Eni, Claudio Descalzi, declare that his company would not drill off Cyprus if it was faced with warships.

Descalzi was quoted as saying: “I am not worried… but if someone turns up with warships I won’t drill. I certainly don’t want to start wars for wells.” This was nothing more than a statement of the bloody obvious, but our government had to put on a show that it was unhappy.

Energy minister Giorgos Lakkotrypis called Eni’s local boss to his office first thing on Friday, supposedly, to seek explanations and was told that Descalzi was referring the safety of the company’s staff, while the company’s commitment to its drilling programme was a given.

Lakkotrypis is a smart guy, did he really need an explanation about the Descalzi’s self-explanatory comments. What did he want him say, that Eni will not be deterred by military threats and is ready to sacrifice its drillships and workers in order to make a gas discovery for Cyprus?

OUR ESTABLISHMENT would like to issue its own plea to all strategic and non-strategic debt defaulters to apply to the Estia Scheme as soon as possible, because the future of our banks and our economy depend on them taking the taxpayer’s money as a just reward for refusing to repay their loans. There will be no better scheme, and if they do not take up the offer they will be taken to court and their house might be repossessed in 10 years’ time, unless deputies strengthen the legislation against foreclosures of primary residences by then.

Our View: Bank union resorting to strikes to preserve power