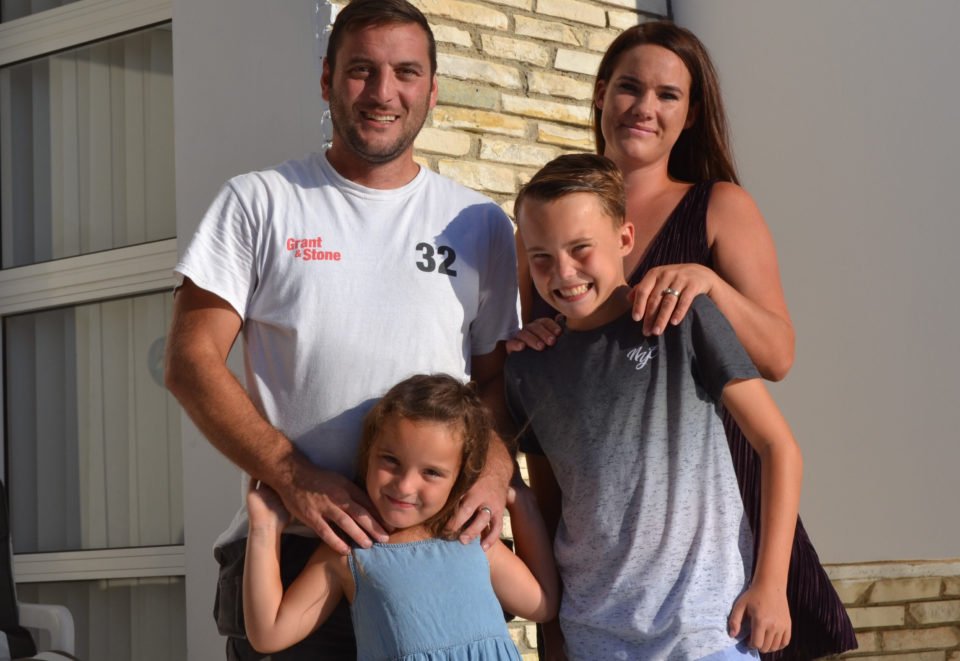 James and Rachel Hennessy with their children, Frankie, 13, and Ivy, 5..JPG

Paphos has experienced a surge in Brits moving to Cyprus in order to escape Brexit chaos, according to industry experts.

Among the most recent ‘Brefugees’ are skilled workers looking to start a new life in the sun and – more importantly – in Europe.

“I’ve had a lot of inquiries in recent months from people who have moved to the island and many of them are citing Brexit among their reasons for relocating,” said financial consultant Mike Flett.

“Most recently I’ve been contacted by plumbers and electricians all wanting to start new businesses here before the UK officially leaves the EU.”

Britain is still due to leave the EU on October 31, but a deal has remained elusive, and uncertainties over the status of British expats if they arrived post-Brexit has led to a rush of relocations to Cyprus before the leaving date.

To deal with the new wave of Brexit-fearing Brits, a one-stop advice centre has been set up in Peyia offering logistical, legal and property help to newcomers. The initiative, spearheaded by removal firm RSS Logistics, has given a lifeline to expats like Rachel and James Hennessy who moved to Cyprus in July along with their two young children.

For Rachel, who worked as a key account manager for a courier company in Buckinghamshire, her decision to leave the UK came after experiencing first-hand the huge financial cost of a looming Brexit.

“At the place where I worked there was a lot of shipping in and out of the country and millions had already been lost because people panicked,” said Rachel, 38.

“Many of our customers simply stopped using us and they put their warehouses in other countries – mainly Belgium, the Netherlands and Poland – because they need that input into Europe.”

Having seen the price being paid by big business, Rachel said it was only a matter of time before the repercussions were felt by ordinary people and their families.

“Brexit hasn’t even happened and yet the amount of money already disappearing is pretty scary,” she said.

“Forty per cent of the customers I looked after were all out to tender looking for new international resources. Looking at the bigger picture, including the knock-on effects that Brexit might have on our family and our standard of living, it made an easy to decision to move even easier.”

Rachel and James moved to Peyia in July and immediately set up their own businesses – JH Plumbing & Heating and Island Rose Cyprus, a florist specialising in wedding flowers.

James, 37, said: “I actually voted ‘Leave’ because I felt that there was a real chance for the UK to change things for the better, but the government has made such a mess of everything – and there were so many consequences of Brexit that weren’t even mentioned – that it became a farce, from start to finish. I really couldn’t see it getting any better.

There were also other factors involved.

“Where we lived was on the overspill of London and they had just introduced metal detectors in our son’s school because of knife crime,” he said.

“Naturally, it made us wonder what kind of world we would be living in by the time our five-year-old daughter was a teenager and we decided it was time to seriously consider what life we wanted to give our children.”

The answer to that question came last year when the Hennessy family holidayed in Cyprus. Having always loved the island – the couple married here six years ago – they decided there was no better time to move or place to live.

Rachel explained: “Once we returned home – and the worse things got in Britain – the easier it was for us to keep on saving towards the move.

“Initially, I thought by the time Christmas arrived our plans would have dwindled away as a nice dream and nothing more, but the chaos surrounding Brexit kept us focussed and we put every penny we had away because we were so determined to move and give our kids a better quality of life.”

According to accountant Mike Flett, Rachel and James’ experience is typical of the stories he is hearing from new arrivals to the region.

“People have always moved to Cyprus for the sun and the quality of life,” he said, “but the past year has seen many people pushed out by political decisions they don’t agree with or from the repercussion of those political decision which have had – or are likely to have – a detrimental effect on their lives, businesses and families.”

Andrea Thorne from Peyia-based removal firm RSS Logistics agreed saying that while there has always been a steady ebb and flow of expats moving in and out of Cyprus, there has been an increase in the past year of people wanting to move from the UK with many coming earlier than planned because of the Brexit deadline.

“Over the last three years, the number of Brits returning to the UK – usually for family reasons – have remained relatively stable. It is the number of people leaving the UK for Cyprus that has shown a dramatic increase,” Andrea said.

“’The reasons for the current surge vary from a general disillusionment with British politics to a real desire to improve quality of living and to continue living in an EU country.”

She said it was ironic that the underlying desire to control immigration which resulted in a vote for Brexit has also resulted in increased immigration from the UK to Cyprus.

“There is also an awareness that this may be the last opportunity to bring high cost items such as cars into Cyprus without the dreaded VAT and possibly other duties,” she added.

“Nobody knows the real implications of Brexit, but certainly for us, the immediate effect is a huge increase in people wanting to leave the UK and remain in the EU while they still can.”

Unfettered by advisers, Trump’s presidency gets even less predictable