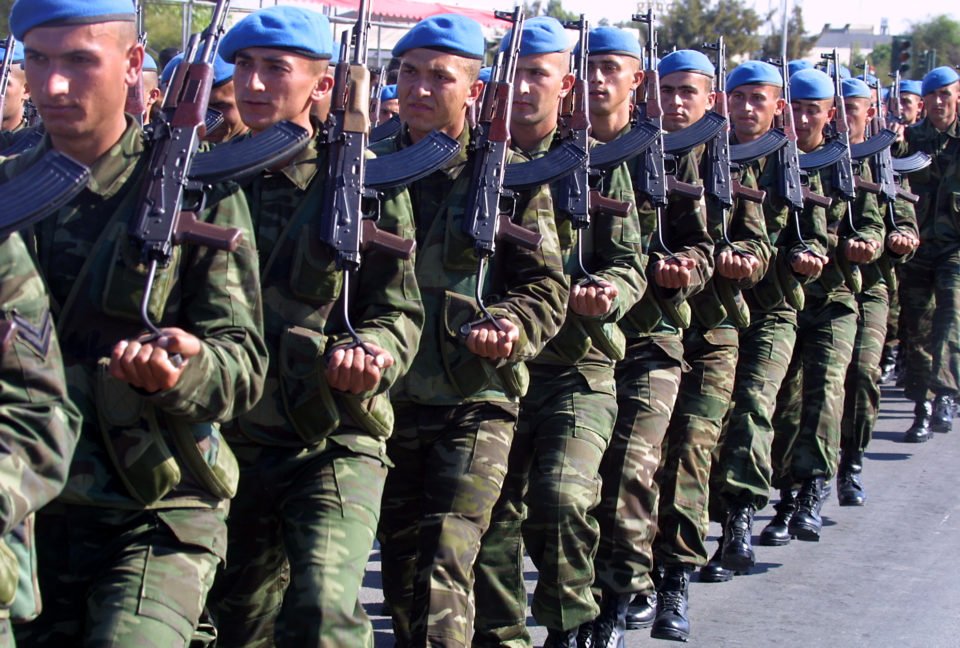 The Turkish military on parade in northern Nicosia.

Certain Cypriots are amazingly naive in believing that the Cypriot National Guard could successfully confront the Turkish military might in an armed confrontation. This belief is obviously a form of wishful thinking belonging to the world of dreams. Not only is there an obvious Turkish quantitative and qualitative advantage but any military conflict is also certain to take place on our home turf, along the buffer zone, with catastrophic consequences for the civilian population and for the tourism and business services industries, which serve as the economic lungs of Cyprus.

Unfortunately, this imbalance becomes even greater if one includes Greece together with Cyprus, given that in a Greek-Turkish war, the military fronts would not be confined to Cyprus but they would extend to other vulnerable Greek locations, such as the Greek islands. These are scattered along the shores of Asia Minor, at distances that can easily be covered by small landing crafts.

Would anybody rally to the support of Cyprus and Greece in such a conflict? An honest response to this critical question leaves little room for doubt: no foreign country would get involved in a war against Turkey, when self-interest demands keeping a distance. The belief that third parties would participate on our side in a war against Turkey is yet again mere wishful thinking belonging to the world of dreams. The geostrategic as well as the economic interests involved are huge and would not be sacrificed.

The evidence which leads to the above conclusion is scattered all over the history of Cyprus, with the glaring example of 1974 standing out (despite the fact that most European governments were then negatively disposed towards the military government of Greece that initiated the coup and provoked the Turkish invasion). Ample evidence is also provided by what is currently happening in the Cypriot EEZ, where the support of our friends is confined to “supportive” statements. One does not have to go far. Just look at the American turning against the Kurds!

The responsibility of successive Cypriot governments lies in the fact that they have systematically overestimated their capability and have thus formulated their targets and strategies on unsound foundations. It is regrettable that successive Cypriot governments have consistently misled public opinion over their ability to confront Turkey, in both the military and diplomatic spheres. The result has been to lead public opinion into positions that are incorrect and harmful to Cyprus’ interests.

Fortunately, they are not heard from the Greek government which appears to be following a sober and responsible policy on the Cyprus problem and is seeking to bring the Cyprus government down to earth and face the relentlessly harsh reality.

There is only one way out of the dead ends into which we, ourselves, have led Cyprus. The way out can be summed up as follows (as I have more fully explained in my last article): grab the opportunity, which still exists, for re-uniting Cyprus immediately. To set a precondition for embarking in a negotiation process, demanding that Turkey unconditionally surrenders, is foolish.  She will not do it and all we will be left with will be the “smearing”.

We only have one card in our hands, namely Turkey’s eagerness to participate in the energy game in the Eastern Mediterranean. Now is the time to throw that card on the table.

Countdown to divorce: Meetings that will decide Brexit