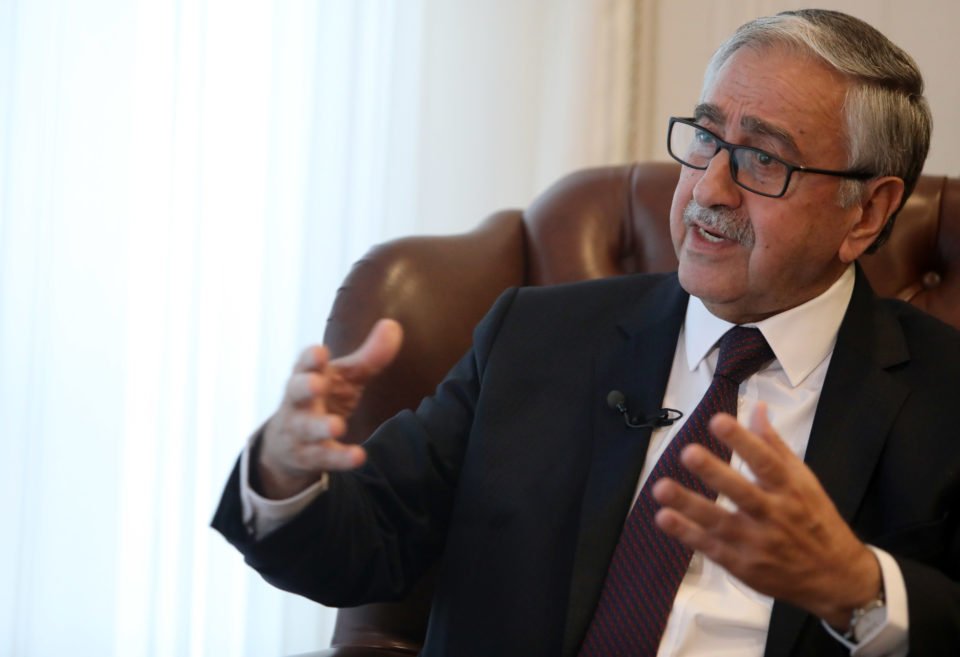 Turkish Cypriot leader Mustafa Akinci on Monday defied his detractors, including Turkish President Tayyip Erdogan, calling on those who he said distorted his Syria comments to “return to common sense”.

“I’m deeply disappointed by the unfair and hurtful expressions and statements against me. I return these statements to their owners,” Akinci said in an official statement on the ‘TRNC presidency’ website. “How long has it been a crime to defend peace? What good will it do to blame and slander?”

Erdogan on Sunday slammed Akinci for his comments about Ankara’s military offensive in Syria. Akinci had initially posted the comments after being criticised for staying silent on the Turkish operation but following the furore over what he said when he did speak, then restricted the post from public view.

Akinci had essentially said the Syria situation was not black and white and that war always meant bloodshed and that issues should be solved through diplomacy. He made a comparison with Cyprus. Akinci had only posted a comment at all due to the anger over his silence, he said.

But Erdogan, during a news conference on the Syria offensive on Sunday, publicly called out Akinci, saying the Turkish Cypriot leader had gone beyond his limits and needed to know what these were.

He wondered if there was any other country in the world besides Turkey that had fought for the “TRNC state” as Turkey had done.

“No. He must know his limits. The seat he sits on is not something he acquired. It was won by the intervention of the Turkish Republic,” said Erdogan. “I believe that the people of the TRNC will give him the lesson he needs.”

Akinci has made a number of public comments since the furore erupted but took his own defence a step further on Monday by publishing an official statement, openly defying his detractors both in Turkey and in northern Cyprus.

While thanking those who supported him and did not take his comments out of context, at the same time he said: “I would like to invite those who deliberately distort and escalate the matter use their common sense. I believe that there is no point in dividing camps and blaming each other.”
Turkey, he said, had suffered much to get rid of the scourge of terrorism and that was a common desire.

“We have emphasised this on every occasion at various events. However, I think it is time for the wars that are about to enter their 10th year on Syrian soil to come to an end,” he added.

He said it was necessary for all peoples in the region to establish a system in which they can live in peace, Syria with its territorial integrity within its own borders and Turkey for which it was also essential to create a situation where Turks could feel safe at their borders.

To accomplish this, he said, for this to happen, Turkey and Syria needed to re-establish relations. This would also help Turkey-EU relations, he said.

“This is precisely why diplomacy and dialogue are essential,” said Akinci, repeating what he had originally said in his Facebook post, which had been twisted to make it look as if he was talking about negotiating with the Kurdish Workers Party (PKK), which Ankara considers a terrorist organisation.

“This was is nothing more than distortion,” he said.

Akinci said the Turkish Cypriots attach great importance to ties with Turkey and he himself has endeavoured to develop relations based on mutual respect.

“But it is not always possible to think the same way and to exhibit the same behaviour on every issue. Respect for different views is a requirement of a healthy relationship,” he added.

His ‘presidency’, he said, was shaped by the free will of the Turkish Cypriot people and he believes they have the maturity “to decide by their own volition and not by suggestions”.

It appeared on Monday that a call for Akinci’s resignation by Turkish Cypriot ‘prime minister’ Ersin Tatar on Sunday had been toned down. Though the issue was discussed in ‘parliament’ and some criticisms issued anew, opposition politicians had backed away from the notion of an ouster with some saying they were not seeking “a lynching”.

“It was a petty attempt ahead of the elections [in April 2020],” said one Turkish Cypriot journalist. “Impeachment over a statement is a bit of an overreach.”

Asked earlier on Monday why he had referred to the Turkish invasion in Cyprus in his original post, Akinci said he always used the same expressions for every war.

“I am not saying this for the first time. For example, on 20 July 2015, I had said this during a ceremony in which President Erdogan was also present. I am saying the same for every war. Let it not happen again, let us not have new martyrs,” he added.

Regarding Cyprus, he said even though “we call it an operation, in the end this is a war”.

“Everyone in Cyprus knows what I wanted to say. I am an old politician. There is no reaction to what I said here. People in Cyprus see where I stand for years now.”

“Like Mr Akinci, we are of the opinion that this issue [Syria] will not be resolved with bloodshed but through negotiations.”

Wounded by the wind