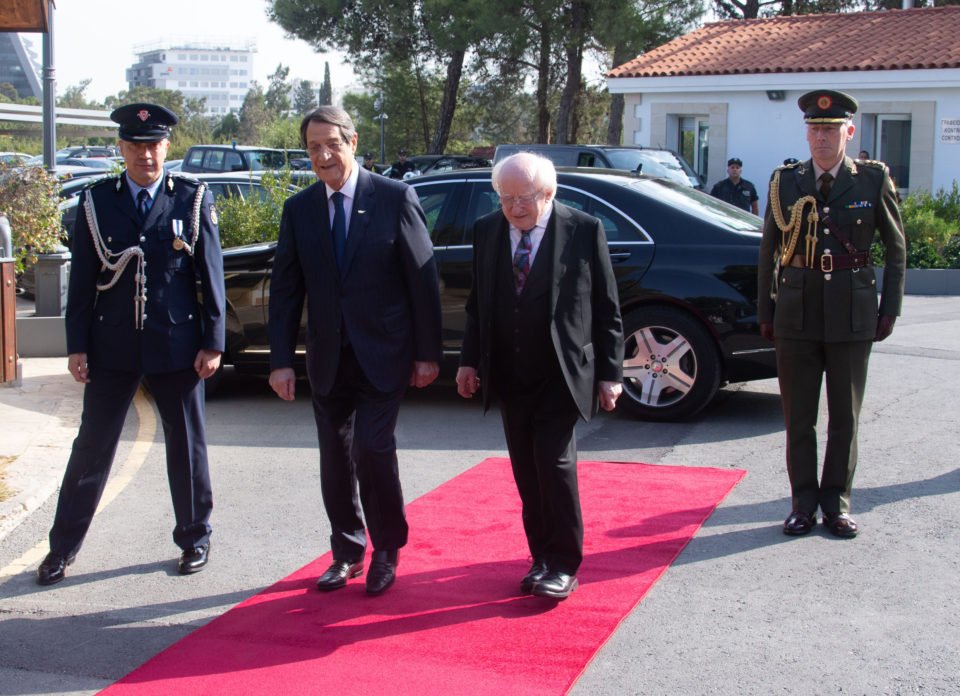 Irish President Michael Higgins said on Monday that Ireland “very well” understands how overcoming a legacy of conflict and division was a difficult process but an achievable one.

Higgins, who began his official visit to Cyprus on Monday, was speaking to the press after a meeting in Nicosia with President Nicos Anastasiades who briefed him on the Cyprus issue and Turkey’s violation of the island’s exclusive economic zone (EEZ).

The Irish president said ending conflict and division was also a time-consuming process, “one requiring great patience and dedication but achievable with political will on all sides”.

“The good will of others with an informed understanding in such endeavours is so valuable, and that the role of the United Nations, for example,  remains central to the process of conflict resolution, and achieving reconciliation,” Higgins said.

“Knowing that Cyprus’s tireless efforts in search of a settlement will continue, Ireland will do whatever it can to be of assistance in such endeavours, in the hope for lasting peace and reconciliation on the island of Cyprus.”

He said Ireland would support Cyprus’ efforts to reach a solution that would ensure peace and stability “through the establishment of an honourable, balanced and durable settlement”.

Higgins lauded the warmth of his welcomed to Cyprus and said perhaps the reason Irish people and Cypriots relate to each other was the fact that being island nations “we both place such a high value on hospitality and friendship. This has been so evident since my arrival”.

He also said the visited provided an opportunity to reaffirm the strong historic friendship that exists between Ireland and Cyprus, both countries which had also endured a financial crisis.

“There is a sense that special mutual solidarity that comes from such a shared experience, as we reflect on what we experienced, and how both of our countries have emerged from these economic difficulties,” said Higgins.

He also said Brexit would have implications for both countries.

Higgins also talked about Ireland’s long-time contribution to the UN peacekeeping force (Unficyp) and said he would be visiting the Committee on Missing Persons on Tuesday, a cause which is supported by Dublin.

The Irish president also expressed concern over the situation in Syria and said he shared the concern of Cyprus in relation to Turkey’s drilling in the island’s EEZ.

“Matters of maritime and activities at sea should be undertaken under international law and any necessary negotiations undertaken in that context,” he said.

In his statements, Anastasiades called the visit “another important milestone in the relationship between our two countries” and expressed gratitude to Ireland for its support of the CMP and UN peacekeeping on the island over the past 55 years.

“We discussed a wide range of issues of mutual interest and of concern, particularly migration, climate change and the future of the European Union,” Anastasiades said.

“Thus, and while not excluding the possibility of new unprecedented waves of refugees following Turkey’s unacceptable intervention in Syria, we strongly believe that shared responsibility and solidarity with those most affected must underpin the EU’s common migration policy”.

He also said Cyprus was grateful for the active support of Ireland in condemning Turkey’s actions in Cyprus’ EEZ “that test our values of upholding international law and the need to abide by the principle of maintaining and promoting good neighbourly relations”.

“We do hope that during the EU Summit to take place this week, the EU will collectively communicate a firm and strong message to Turkey,” he added.

On the Cyprus issue, he said that while he is committed to a settlement “the only way to achieve this is not with gunboat diplomacy, blackmail tactics and attempts to force our side to negotiate under duress, but through an environment of equal-standing and an environment conducive to holding constructive discussions”.

Higgins, who arrived on the island Sunday with his wife Sabina, is accompanied, by Ireland’s Minister of Justice and Equality, Charles Flanagan.

It is the first official visit by an Irish president, a largely ceremonial role, since 2006.

The visit follows Anastasiades’ official visit to Ireland in 2016. Higgins will also be given a tour of the buffer zone and will visit Irish civilian police serving with Unficyp. He will also address the House on Wednesday.

Higgins will also have the opportunity to meet the Irish community in Cyprus. After Cyprus, Higgins will depart for Lebanon later on Wednesday.