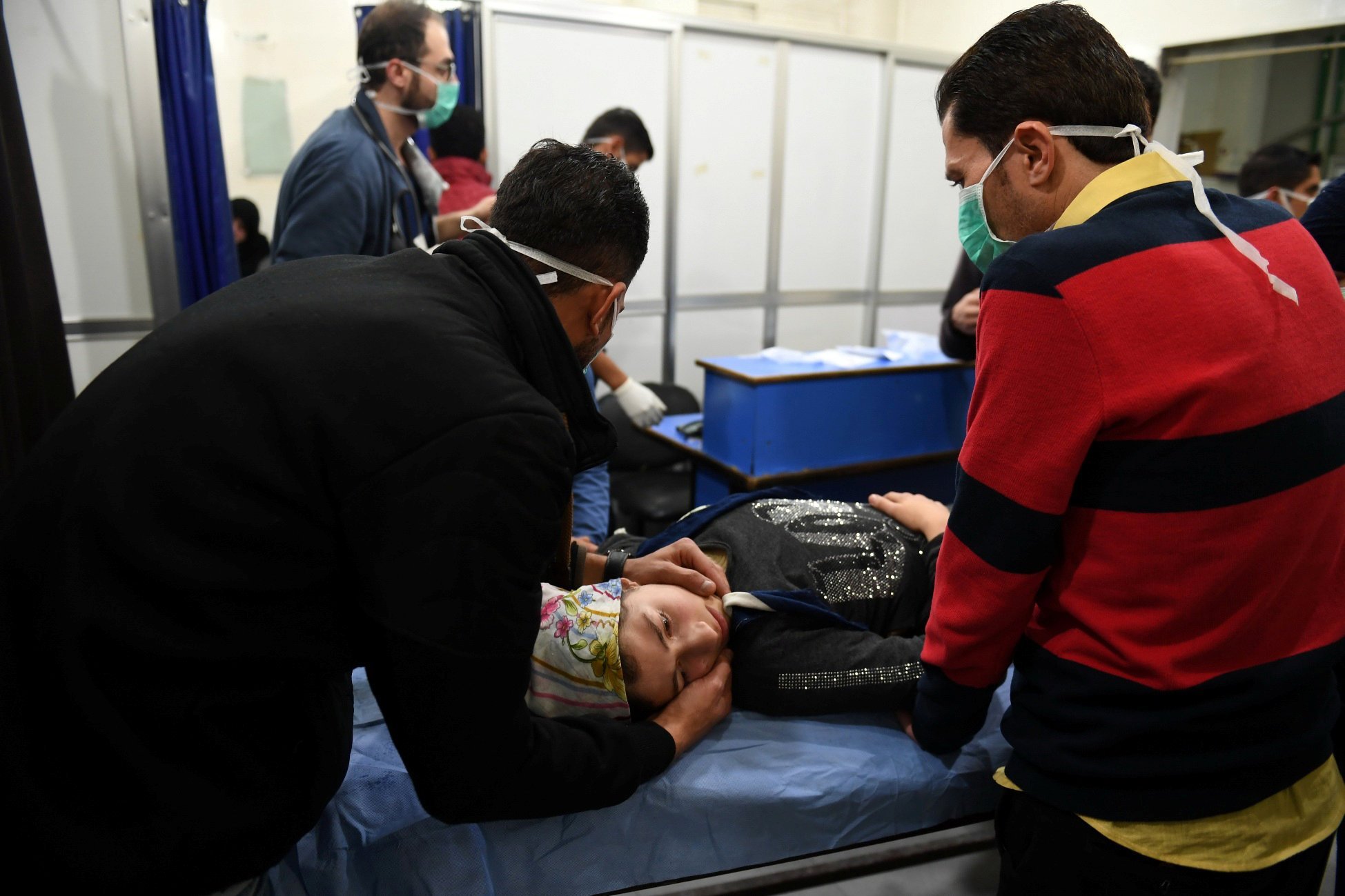 A woman lies on a stretcher inside a hospital after what the Syrian state media said was a suspected toxic gas attack in Aleppo.

When a children’s hospital in Aleppo was decimated in 2016 after multiple bombings, British-Syrian doctor Rola Hallam decided to turn her grief into action.

Within weeks the London consultant anaesthetist was on the way to the Syrian border with enough equipment to build the world’s first crowdfunded hospital.

“Thousands of people from around the world came together to raise the money we needed,” said Hallam, who won the Women of the Year lifetime achievement award in London on Monday.

“The Syrian doctors and nurses were blown away. For the first time they felt heard and seen by people around the world. It gave them so much hope that they named it Hope Hospital.”

The hospital, which has since treated 200,000 children, is supported by CanDo, a social enterprise Hallam set up to help local humanitarians in warzones crowdfund lifesaving work that larger aid organisations often cannot do.

“The remarkable doctors and nurses that I’ve had the honour and privilege to work with inspire me and motivate me every single day.”

Hallam, 40, who moved to Britain as a teenager after growing up in Damascus, said the idea for CanDo was born in 2013 when she was working in a Syrian field hospital in rural Aleppo.

She was among medics who treated children for horrific burns after a schoolyard was bombed.

It was a heartbreaking day made even worse because Hallam did not have all the equipment, medicines and resources she needed to help the children.

“I should have been able to give them sedation and pain killers, put a breathing tube in … Instead, I had to send them suffocating and in pain to Turkey,” she said.

Although Syrian non-governmental organisations carry out 75% of humanitarian work they receive less than 1% of aid funds for the country, Hallam said, a pattern also seen in other warzones.

At the same time Hallam said there is growing public disillusionment with some bigger charities, with many people wanting to know exactly how and where their donations go.

Not only are local humanitarians first on the scene, but they can reach communities cut off from other aid and remain after other agencies have pulled out. They also share the same culture and language as the people they are helping.

Hallam said CanDo had raised 1.3 million pounds ($1.6 million) since 2017 for projects that have helped 500,000 people. It wants to expand to Yemen, South Sudan and Myanmar.

In Syria, Hallam would like to see mental health support and rest breaks for the “heroes” on the frontline.

“International aid workers get rest and recuperation. Local aid workers do not get any of that. They are beyond burnt-out. Imagine, eight years of this hell,” she said.

Hallam said attacks on Syria’s health services were used as a weapon of war and were “crimes against humanity”.

She said there had been more than 500 attacks on hospitals, 90% by Syrian forces and their allies, and more than 800 of her colleagues had been killed, many under torture.

“This is premeditated destruction … in order to terrorise a civilian population into submission,” she said.

But she warned that the destruction of Syria’s health infrastructure also had global repercussions – fuelling the refugee crisis and raising the risks that Syria will be the source of the next Ebola-scale health emergency.

“If we don’t rebuild Syria’s healthcare system we are going to be the next exporter of these global diseases,” she said.

Demonstration to support Kurds to be held at Ledra Palace