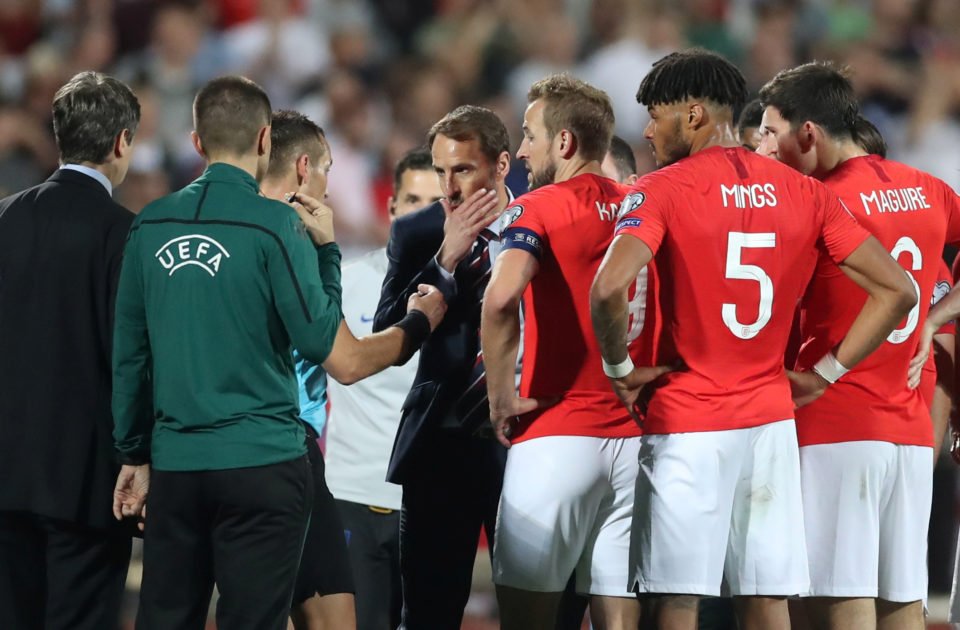 The Euro 2020 qualifier between Bulgaria and England was twice halted by the match referee in the first half on Monday under a three-step UEFA protocol to tackle racist abuse from the crowd.

Britain’s Sky Sports television said racist chanting was heard from the stands and reported by England players to manager Gareth Southgate, with the referee informed and a public announcement made while play was stopped.

The match was again temporarily suspended after a further complaint was made by Southgate.

Sky Sports reporter Rob Dorsett said he had heard monkey chants on six occasions when England players Tyrone Mings, making his debut, and Marcus Rashford were in possession of the ball.

“I heard one fan clearly shout “Hey, monkey” as Mings passed the ball,” he said.

The UEFA protocol involves the referee first halting play and making an announcement to the supporters to immediately stop racist behaviour.

The second step sees the match suspended for some time and both teams sent to the dressing room if the abuse continues, with another warning given to the fans.

In the third and final step, the referee decides to abandon the match. Sky quoted UEFA as stating that the referee had not enforced the second step even though play was halted twice.

England won the Group A match 6-0.

Bulgarian captain Ivelin Popov spent time talking to fans through the metal fence at the break. A number of people were also seen leaving the stands.

“You can talk about protocols, but I’m sitting here feeling sick to my stomach. It’s heart-breaking,” said former Manchester United and Ireland midfielder Roy Keane, a pundit for ITV television.

“The game is done now but I feel physically sick watching that.”

Former England striker Ian Wright, also a pundit for the broadcaster, said it was “a terrible day for the Bulgarian people but a great one for trying to tackle racism.

“We can see those bans mean nothing, we are seeing a set of fans that do not care and need educating. That’s what has got to happen,” he added.

The game at the city’s Levski stadium was being played in front of a reduced crowd after UEFA ordered a partial closure due to racist behaviour by their supporters in June’s qualifiers against the Czechs and Kosovo.

Racism was a major talking point ahead of the game, with England striker Tammy Abraham indicating last week that the players could act as a group and leave the pitch if subjected to abuse.

Bulgarian supporters made monkey chants at visiting black players when England last travelled to Sofia for a European qualifier in 2011, prompting UEFA to fine the Bulgarian Football Union (BFU) 40,000 euros

Portugal were beaten 2-1 by Ukraine in the Group B match.