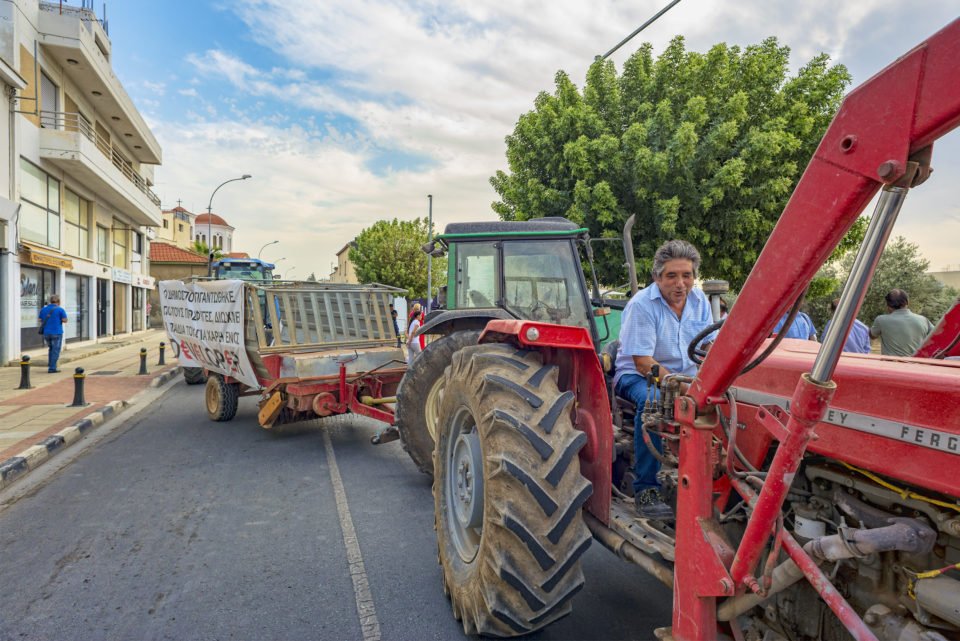 Protesters gathered outside the Kato Polemidia town hall on Tuesday to express their anger following a court order to demolish six livestock farms.

Breeders parked their tractors outside the town hall for about an hour demanding an explanation and a solution for the problem.

The six farms in question currently host more than 2,500 sheep and goats.

This particular issue has been a concern for farmers in the area for many years, as they say the freeze on animal transfers procedures combined with the lack of approval for new licences, has greatly damaged their business.

Around 40 farms in Kato Polemidia are now considered illegal and in danger of being padlocked.

Moreover, the decision by a developer to convert a nearby piece of land into a residential area has pushed the municipality to speed up the closing of the farms.

The Chairman of the House agriculture committee Andros Kafkalias, who was present at the protest along with MPs George Georgiou (Akel) and Panikos Leonidou (Diko), supported the demands of the farmers.

“The situation that the farmers in the Kato Polemidia area have encountered is a grave injustice to them,” Leonidou said.

“In three years, the agriculture committee has done nothing to solve the situation.”

Kafkalias added that “the government is cheating everybody” and noted that the matter would be discussed again at the parliamentary committee on October 29, “where we hope this time that the farmers’ problem will be resolved.

“We are not against development, but it is unacceptable to declare a livestock area illegal without first deciding on what the farmers in the area are going to do.

“What we are demanding today is the suspension of the decision to close the farms and the implementation of the 2007 Council of Ministers decision, which proposes to move the livestock to the nearby area of Vati,” he said.

He also warned that if livestock facilities were to be demolished without any prior steps being taken to move the animals “we will leave them in front of the town hall and the municipality would become responsible for them.”

“Dozens of families are at risk of being left out of work,” added Panicos Chambas, secretary-general of the Cyprus Farmers’ Association (NRA).

“It seems to me now that no one has taken into account that the animal would be left homeless, should the farms close down permanently.”

Mayor of Kato Polemidia Nikos Anastasiou said the municipality had no choice but to close the farms.

“We have been forced by the court to go ahead and denounce the illegal farms, and we have to respect the law,” he said.

“However, I feel that the government has left us alone to deal with this complex and unpleasant situation.”

“Moving the livestock to the Vati area would only cost €250,000,” the mayor said to mainly cover the cost of a new road that leads to already existing farms.

“Instead, what the government is proposing is to build new farms in the Kato Polemidia and the Ipsona municipalities, which will end up costing over €10 million.

“Unfortunately, no one is listening to our proposal.”

Akinci criticism ‘stain in the history of Turkish Cypriot democracy’