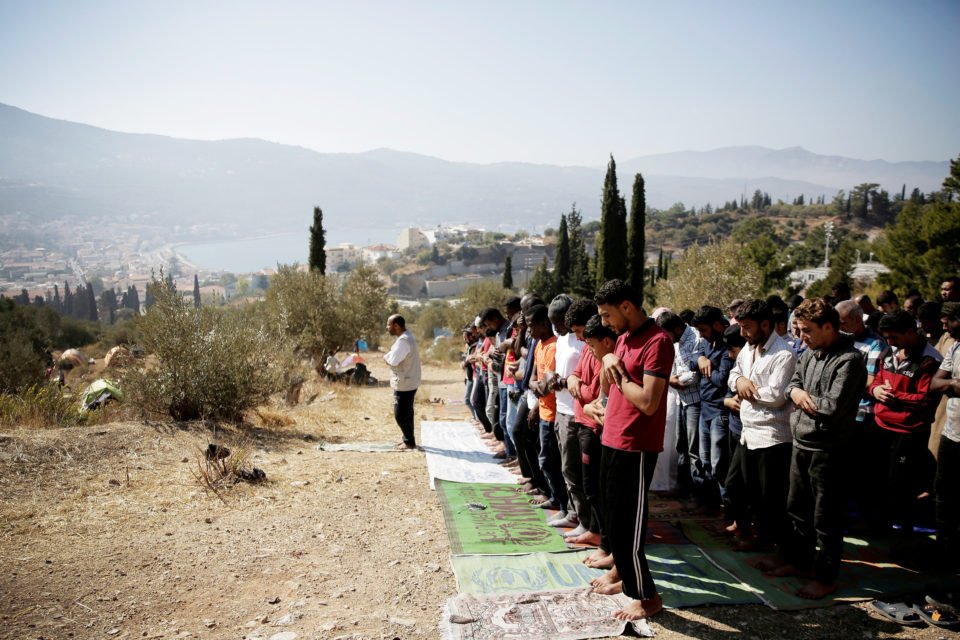 FILE PHOTO: Migrants pray at a makeshift camp on the Greek island of Samos

A fire in a severely overcrowded migrant camp in Greece forced hundreds of people into the streets, compounding their plight with more refugees arriving on Greek islands daily in what an aid group called a worsening “nightmare”.

Greece sent more police to the island of Samos on Tuesday after the fire, which occurred two weeks after a deadly blaze at a troubled camp on nearby Lesbos triggered protests there.

The Samos fire flared outside the camp on Monday night, firefighters said, before spreading inside. Earlier, three Syrians had been taken to hospital with stab wounds suffered in a fight with a group of Afghans, police said.

Several tents and housing containers were destroyed and 600 people were given shelter by aid groups, the Medecins Sans Frontieres (MSF) charity said. It estimates that half of the camp’s residents are women and children.

“This nightmare must end!” MSF wrote on Twitter. “Children and other vulnerable people must be evacuated from the Greek islands to safe accommodation.”

Greece is struggling with the biggest resurgence in refugee and migrant flows across the Aegean Sea from Turkey since a 2015 crisis when more than a million streamed into Europe, many of them entering the continent via Greece.

A regional governor, Costas Moutzouris, described the current situation on Greece’s frontline islands as “tragic” and called on the government to act.

More than half of refugees and migrants reaching European Union territory this year from the Middle East, Asia and Africa have been to Greece, according to United Nations data.

Athens has announced a stricter migration policy to deal with the crisis, including plans to deport 10,000 migrants by the end of next year. But efforts to ease overcrowding have borne little fruit as arrivals have surged to record levels.

The Samos camp, initially built for about 650 people, is unravelling under the weight of more than 5,700 asylum-seekers, according to the latest government data.

More than 12,000 people arrived in Greece in September, according to the U.N. refugee agency UNHCR, the highest level in the three-and-a-half years since the EU agreed a deal with Turkey to seal the Aegean corridor to Europe.

He cautioned that Greece might not be able to deal with the potential refugee fallout from a military offensive launched by Turkey against Kurdish fighters in northeastern Syria last week.

“The pressure currently being placed on populations on the Turkey-Syria border may force several thousand Syrians, or others living in the region, to want to cross the border into Turkey. And then what happens?” Avramopoulos said.

“That would be catastrophic for Greece, and for Europe.”

EU millennials go on a trip of a lifetime

Brexit: EU to collapse while Britain will just suffer a bout of hiccups