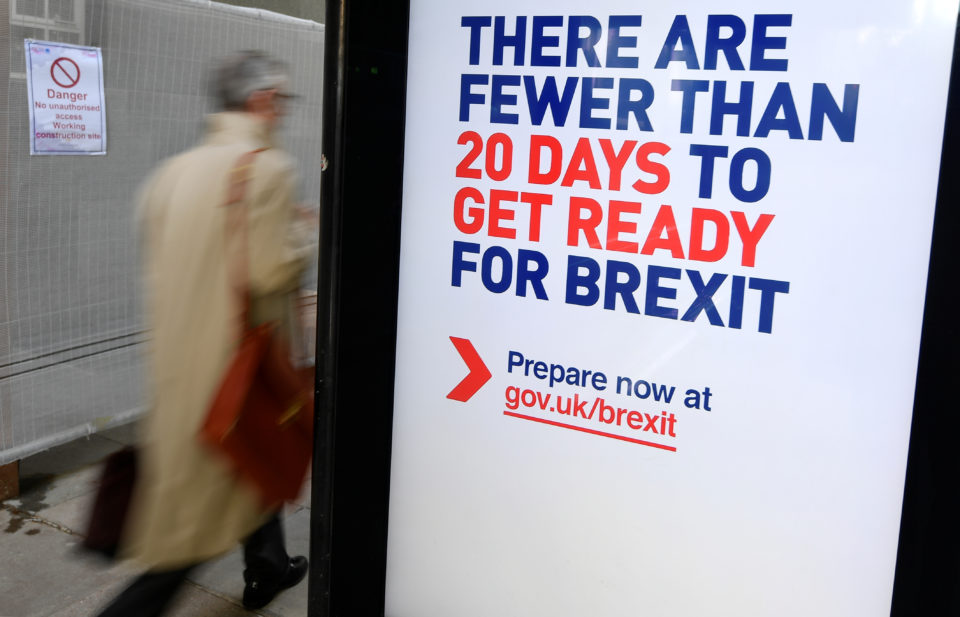 Irish Prime Minister Leo Varadkar said on Wednesday that last-ditch talks between the European Union and Britain had so far failed to resolve issues standing in the way of an amicable Brexit, with EU sources reporting a “standstill”.

Difficulties centred on trade and the status of the Irish border, although the EU’s chief Brexit negotiator, Michel Barnier, was quoted as saying he was optimistic about a deal.

“There is a pathway to a possible deal but there are many issues that still need to be fully resolved,” Varadkar said in a speech. “I do think we are making progress but there are issues yet to be resolved and hopefully that can be done today.”

“But if it’s not, there is still more time. October 31 is still a few weeks away and there is the possibility of an additional summit before that if we need one … Although time is running short, I am confident that (Ireland’s) objectives can be met.”

Varadkar said he had spoken to British Prime Minister Boris Johnson earlier in the day. Johnson has vowed to take Britain out of the EU on Oct. 31 with or without a deal.

Shortly before Varadkar spoke, EU sources said the talks had reached a “standstill” over a future trade deal with Britain, and the rejection by Northern Ireland’s Democratic Unionist Party (DUP) of customs solutions tentatively agreed by negotiators.

Arlene Foster’s “red line” that there could be no Brexit deal that would divide Northern Ireland from the rest of the United Kingdom was “blood red”. Now it’s not even a line. #DirtyBrexit
https://t.co/xX6HKz3msK via @IrishTimes

“It broke down because the DUP rejected the customs arrangement at their meeting with Johnson,” an EU official told Reuters. “So there was a tentative customs deal but it got struck down.

“The UK is negotiating with us again without being able to guarantee a majority in the House of Commons. We’ve been here before.”

Johnson is likely to have to rely on DUP votes to get any deal through the British parliament.

An EU diplomat said “the dynamics in London do not look as good today as they might have looked in recent days.”

Johnson and his team are in talks with the EU, and with lawmakers from the governing Conservatives and the DUP to try to win their support for any deal, his spokesman said.

The spokesman said there remained issues to resolve with the EU. Johnson would update his senior ministers later in the day.

A second EU diplomat said negotiators had disagreed over a future trade deal between Britain and the EU.

“The UK wants us to legally commit to sealing a free trade agreement with them in the future that would be tariff-free and quota-free. But we can’t do that, it would be prejudging the future negotiations and tying our hands,” the diplomat said.

“So it’s a bit of a standstill at the moment.”

However, Barnier, was quoted as telling a closed-door meeting of the European Commission earlier in the day that he was “optimistic” about chances of getting a deal on Wednesday still.

Earlier, reports of a possible collapse in negotiations to produce a Brexit deal that could be approved by a summit of EU leaders in Brussels on Thursday and Friday hit sterling and stocks in London.

Barring a last-minute agreement at the summit, the EU believes Britain will have to delay its departure for a third time.

The EU may hold an emergency summit later in October to either approve a deal, grant an extension or make last preparations for a chaotic split.

Britain’s Brexit minister Steve Barclay said he would not accept a Brexit delay beyond Oct. 31, even if it was only used to tie up the necessary legal requirements of an agreement.

“No, I think it is important that we leave on the 31st of October,” Barclay told a British parliamentary committee.

No place for people like Georgiades in public office