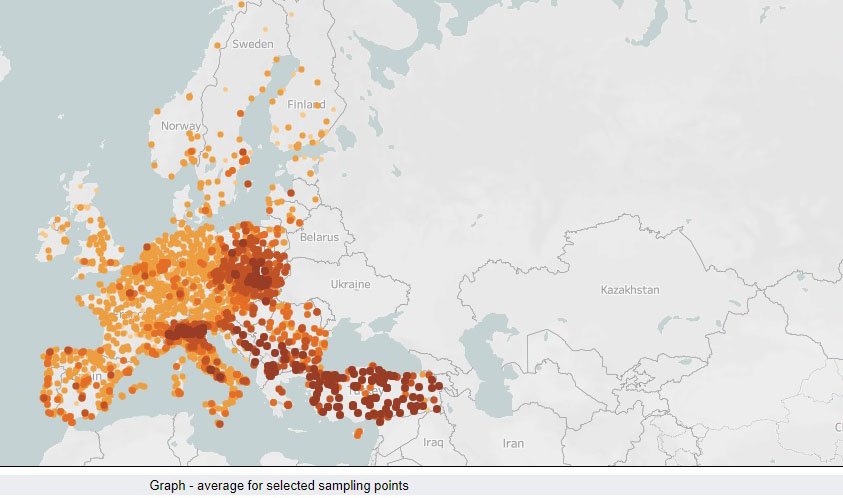 The European Environment Agency (EEA) said on Wednesday warned that almost all Europeans living in cities are exposed to air pollution levels that exceed the health-based air quality guidelines set by the World Health Organisation (WHO).

The report is based on the latest official air quality data from more than 4 000 monitoring stations across Europe in 2017, including Cyprus, which it has placed in a ‘dark orange’ zone after taking measurements from three stations, Nicosia, Limassol and Ayia Marina.

The EU has set a limit value on particulate matter (PM10) which should not exceed a daily average concentration of 50mg/m3 (micrograms per cubic metre) in terms of safety.

In Limassol the measurement taken in 2018 for the report was 48.3mg, Nicosia 71.7 and in Ayia Marina 42.5, putting the capital in a red zone on the day the measurement were taken.

The report comes only two days after the labour inspection department in Cyprus has warned of high concentrations of dust in the air after measurements conducted by the air quality monitoring network.

According to the EEA, there were about 412,000 premature deaths in 41 European countries in 2016 that could be connected to health problems caused by poor air quality.

Compared with the EU limit values, fine particulate matter concentrations were too high in seven EU Member States in 2017 (Bulgaria, Croatia, Czechia, Italy, Poland, Romania and Slovakia, all of which has numerous ‘red zones’.

In addition, four EU Member States, (Bulgaria, Hungary, Poland and Slovakia) have not yet met the EU’s 2015 target for the three-year average exposure for fine particulate matter.

Last Monday, the day in which a warning about air pollution was issued in Cyprus, values went us to as much as 145mg/m3 of dust in the air in Limassol, 122mg/m3 in Paphos and 106mg/m3 in Larnaca, more than double the limit.

The term “dust” refers to respirable particulate matter of a diameter smaller than 10mg (PM10) in the air.

“The EEA report is an important and timely reminder that air pollution continues to impact most regions across the EU, and affects the lives of most citizens. It is simply unacceptable that any of us should need to worry about whether the simple act of breathing is safe or not,” said Karmenu Vella, EU Commissioner for Environment, Maritime Affairs and Fisheries.

Ursula von der Leyen, the President-elect of the European Commission, has put forward a “European Green Deal” as the first priority of her Political Guidelines for the new Commission.