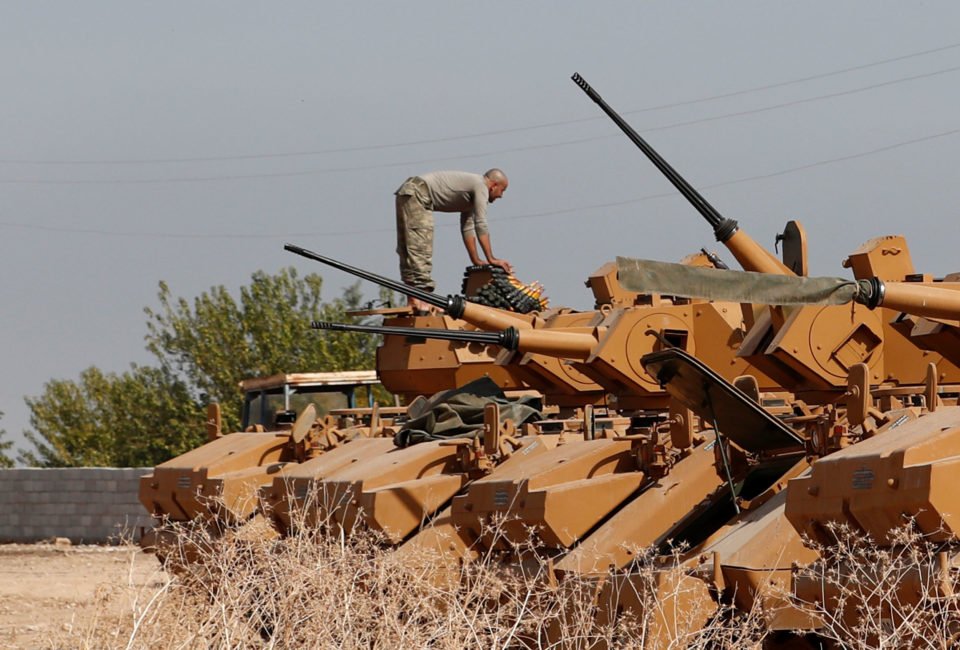 A Turkish soldier stands on top of an armoured personnel carrier (APC) near the Turkish-Syrian border in Sanliurfa province, Turkey

RUSSIA and its Syrian ally Bashar al-Assad win, the Kurds lose, and the United States leaves in disgrace. It has been a hectic few days on the Turkish-Syrian border.

After a phone call with Turkey’s President Recep Tayyip Erdogan on 7 October, Donald Trump abruptly abandoned America’s Kurdish allies in Syria. As US troops pulled out of their positions along Syria’s northern border, where they had been protecting the Kurds from a Turkish attack, Erdogan moved fast.

The Turkish president declared that he would take over a big chunk of northern Syria to drive out the Syrian Democratic Forces (SDF), the Kurdish-dominated militia that has been America’s key ally in the fight against Islamic State (ISIS). Erdogan described the SDF as ‘terrorists’ and a threat to Turkey, but they are nothing of the sort.

Syrian Kurds are the majority population in the border region with Turkey. They created the SDF to resist Islamic State’s attempts to conquer the region five years ago after the Syrian regular army pulled out of the region to fight rebels elsewhere in the country.

The SDF became America’s key local ally in the fight against ISIS. Over 10,000 Kurds died in that war, while the United States gave them air support. By the end of last year, they had destroyed the Islamic State, and the whole region was at peace. The local Kurds and their Arab neighbours were running it themselves.

The Kurds did want autonomy within Syria, but they never demanded independence and they have made no attacks on Turkey, terrorist or otherwise. So why did Erdogan want to attack them?

Erdogan is paranoid about the Kurds, because one-fifth of Turkey’s own population are ethnic Kurds, and some of them have waged a guerilla and terrorist struggle for decades, seeking an independent state. Other Kurdish minorities in the region, including those in Syria, are not at war with the Turks, but Erdogan didn’t like having the Kurdish-run SDF on his border.

Erdogan invaded last Saturday, and after about 36 hours the despairing Syrian Kurds did the obvious thing: they asked the Syrian army to come back and save them. They don’t love Syria’s dictator, Bashar al-Assad, but it’s better than being invaded by Turkey and losing their homes permanently.

But there was something puzzling about all this. Why would Assad’s Russian allies approve a Syrian army move that might bring it into direct conflict with the Turkish army? After all, Vladimir Putin has been courting Erdogan as a potential ally (even though Turkey is currently a NATO member).

The Syrian army is now driving back into the northeastern part of the country unopposed by the SDF. They will re-occupy the whole region (which is Syrian sovereign territory).

The Syrian Kurds may still be able to negotiate an autonomy deal with Damascus, on the grounds that they are Syria’s only non-Arab minority. In any case, they have no other alternative.

Erdogan can either back down and be humiliated, or he can press on and risk war not only with the Syrian army but also the Russian air force. That’s the way it looks on the surface, and maybe that’s all that’s going on here.

But we must also consider the possibility that the whole thing has been a charade, master-minded by the Russians, to get the Americans out of Syria and restore Syrian government control over all of eastern Syria.

First Erdogan puts the frighteners on Trump in the famous phone-call, and Trump abandons the Kurds and starts pulling the US troops out. Then Erdogan launches the threatened invasion, and the Syrian Kurds understandably panic and make a deal with Damascus.

The Syrian army returns to the northern border for the first time in five years without having to fire a shot, carefully avoiding the points along the border where the Turks have already entered the country.

Erdogan declares a ceasefire and eventually withdraws his troops, stating that he is satisfied that the Kurdish ‘threat’ has been ended because the Syrian army, not the SDF, now controls the border.

Even Iran is satisfied, because this eliminates the possibility that the US forces could be an obstacle to its planned secure corridor across Syria to Lebanon. There’s no proof of this, but it makes sense. The Russians are smart enough, and Trump is inept or compromised enough. It would explain why the Russians looked like they were backing the Syrians at the risk of alienating their new Turkish friend. Maybe there was no risk. Maybe Erdogan was in on the deal.

And don’t worry about a revival of Islamic State. For the thousands of ISIS fighters now held prisoner by the Kurds, there can be no worse fate than falling into the hands of the Syrian army.

Discussions on Airbnb bill to finish next week