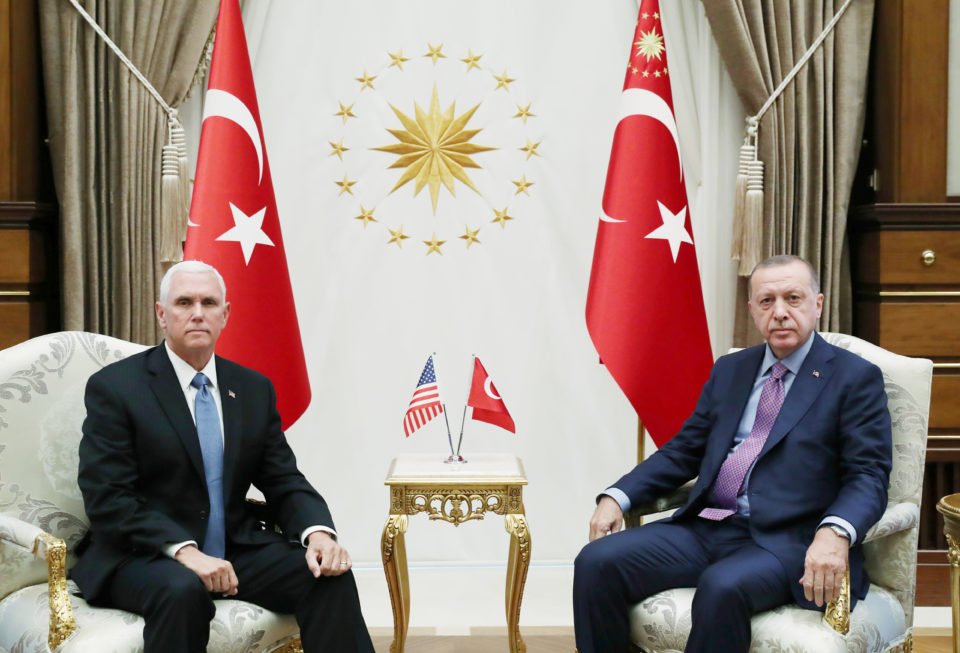 U.S. Vice President Mike Pence met President Tayyip Erdogan in Turkey on Thursday on a mission to persuade him to halt an offensive against Kurdish fighters in northeast Syria, but Turkish officials said the action would continue regardless.

The assault has created a new humanitarian crisis in Syria with 200,000 civilians taking flight, a security alert over thousands of Islamic State fighters abandoned in Kurdish jails, and a political maelstrom at home for President Donald Trump.

Trump has been accused of abandoning Kurdish-led fighters, Washington’s main partners in the battle to dismantle Islamic State’s self-declared caliphate in Syria, by withdrawing troops from the border as Ankara launched its offensive on Oct. 9.

Trump defended his move on Wednesday as “strategically brilliant”. He said he thought Pence and Turkish President Tayyip Erdogan would have a successful meeting, but warned of sanctions and tariffs that “will be devastating to Turkey’s economy” otherwise.

THROWN IN THE TRASH

The White House released a letter from Trump to Erdogan from Oct. 9 that said: “Don’t be a tough guy” and “Don’t be a fool!” Turkish broadcaster CNN Turk said Turkey had rejected Trump’s appeal to reach a deal to avoid conflict and the letter was “thrown in the trash”.

A Turkish official told Reuters: “The letter Trump sent did not have the impact he expected in Turkey because it had nothing to take seriously.

“What is clear is that Turkey does not want a terrorist organisation on its border and the operation will not stop because of the reaction that has been coming.”

Pence and Secretary of State Mike Pompeo did not speak to reporters before the start of the meeting with Erdogan, but the official said they were likely to convey the same U.S. demands, adding: “However, negotiating with a terrorist organisation or turning back from the ongoing operation are not on the agenda.”

On Monday, White House economic adviser Larry Kudlow told CNBC that the United States was prepared to levy additional sanctions on if necessary “to keep Turkey in line”.

A top aide to Erdogan, Ibrahim Kalin, said Turkey’s foreign ministry was preparing to retaliate for the sanctions by its NATO ally.

Erdogan has dismissed the sanctions and rejected a global chorus of calls to halt the offensive, which Turkey says will create a “safe zone” extending 20 miles (32 km) into northeast Syria to ensure the return of millions of Syrian refugees and clear the area of Kurdish militia Ankara views as terrorists.

Turkey will end its operation when Kurdish forces withdraw from the “safe zone” and “no power” can deter the operation until it reaches its goals, the Turkish leader said.

Trump has defended his move to withdraw troops from Syria as part of a wider effort to bring U.S. soldiers home from “endless wars”, despite criticism by members of his own Republican Party.

Turkey’s operation has allowed Syrian President Bashar al-Assad to send his Russian-backed forces to an area that had been beyond his control for years in the more than eight-year-old Syrian war.

It also prompted the Syrian Democratic Forces (SDF), of which the Kurdish YPG is the main component, to strike a deal with Damascus.

Russia has promised Turkey that the Syrian Kurdish YPG militia targeted by the offensive will not be in the Syrian territories across the border, Turkish Foreign Minister Mevlut Cavusoglu told the BBC on Thursday.

Earlier in the day, Russia’s foreign ministry spokeswoman said Syria should get control over its border with Turkey as part of any settlement of the conflict in the region.

Ankara views the U.S.-backed YPG as a terrorist organisation because of its link to Kurdish militants waging an insurgency inside Turkey, and had been infuriated by Washington’s support.

A Reuters cameraman along the Turkish border with Syria said clashes continued around the border town of Ras al Ain on Thursday and that Turkish warplanes were flying overhead after a lull in fighting overnight.

Ankara had previously said it has taken control of Ras al Ain and Tel Abyad, two key towns along the border.

Syrian troops accompanied by Russian forces have meanwhile entered Kobani, a strategic border city and a potential flashpoint for a wider conflict, said the British-based monitor the Syrian Observatory for Human Rights.

Lebanon’s al-Mayadeen TV reported that Russian-backed Syrian forces had also set up outposts in Raqqa, the one-time capital of Islamic State’s caliphate, which the Kurds captured in 2017 at the peak of their campaign with U.S. support.

Hezbollah’s al-Manar TV said from the Tabqa military air base near Raqqa that Syrian government troops had advanced in that area.

“We entered the Tabqa military airport easily, there was no difficulty,” an army officer told the channel from the base, where Islamic State fighters executed scores of Syrian troops and circulated a video of their corpses in 2014.

Soldiers entered Tabqa and nearby villages on Monday, state media said, a deployment that restored the state’s foothold in that part of Syria for the first time in years.

With U.S. air power and special forces, SDF had battled for weeks in 2017 to take Tabqa and a nearby hydroelectric dam – the country’s largest dam – from Islamic State.

Also, state-run Ikhbariya TV broadcast live from Kobani, where it said soldiers deployed into the town since yesterday.

The channel said people who fled Turkish attacks on the mainly Kurdish town in recent days were now starting to return to their homes. “We are steadfast right at the Turkish border,” an army officer told the state TV.

The Kurdish-led administration in the region said the Turkish offensive had killed 218 civilians, including 18 children since it started a week ago. The fighting has also wounded more than 650 people, it said.

Turkish authorities say 20 people have been killed in Turkey by bombardment from Syria, including eight people who were killed in a mortar attack on the town of Nusaybin by YPG militants on Friday, according to the local governor’s office.

In Geneva, humanitarian agencies said they were struggling to meet the needs of up to 200,000 civilians who had fled the fighting and reported water shortages in the Syrian city of Hasaka.

The operation has also created a land-rush between Turkey and Russia – now the undisputed foreign powers in the area – to partition Kurdish areas that were formerly under U.S protection.

Russia, Assad’s most powerful ally, has called the offensive “unacceptable” and said it must be limited in time and scale.

Erdogan, who has forged close ties with Russian President Vladimir Putin through defence and energy cooperation, as well as joint efforts for a political solution to the Syrian crisis, will travel to Sochi on Oct. 22 for emergency talks on Syria.