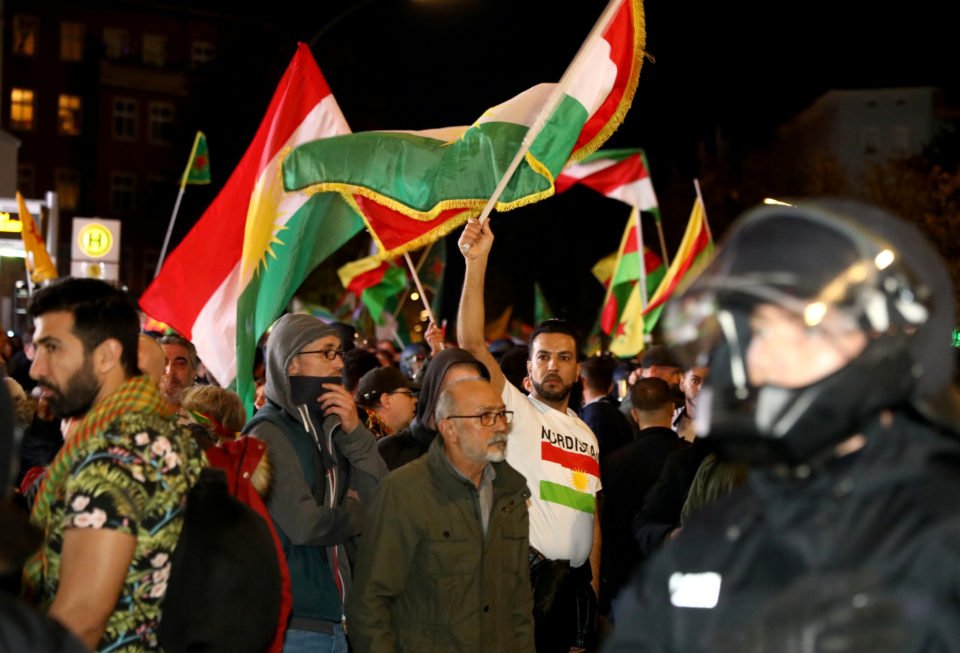 Kurdish protesters during a demonstration against Turkey in Berlin.

Turkey’s military offensive in neighbouring Syria is raising tensions among Germany’s large Turkish, Kurdish and Syrian Arab communities, who are bitterly divided over the operation and have made conflicting demands of Berlin on how to respond.

The opposing views are voiced most openly in cities like Berlin and Cologne, where those communities are concentrated, and Kurdish protests against the Turkish operation have sporadically spilled into violence.

Turkey says it intends to create a “safe zone” extending 20 miles (32 km) into northeast Syria to ensure the return of millions of Syrian refugees and clear the area of Kurdish militia Ankara views as terrorists.

“We are sacrificing our soldiers and spending money on an operation to free the north of Syria so that Syrian refugees can return home,” said Handan Bucak, a 45-year-old housewife, sipping Turkish tea outside a cafe in Berlin’s Kreuzberg suburb.

“How can this be a bad thing? Germans don’t like (President Tayyip) Erdogan and this won’t change regardless of what he does. Germany should just leave Turkey alone.”

Her friend Serpil Annak, a 43-year-old nurse, couldn’t agree more. “The Kurds in northern Syria take their orders from the PKK, which is (considered) a terrorist organisation in Turkey and Europe. So what’s all the fuss about?”

But members of the Kurdish community, who fear the operation could claim hundreds of lives, force thousands to flee, and result in the resurrection of the Islamic State militant group, have been holding daily protests demanding that Germany impose tougher sanctions against Turkey.

“People in northern Syria are being killed with weapons made in Germany,” said Ayten Kaplan, an occupational trainer from the western city of Essen. “Germany can’t look the other way. Erdogan wants a zone for Islamists not a safe zone.”

Chancellor Angela Merkel said on Thursday that Germany would not deliver any weapons to Turkey under current circumstances and added she had urged Turkey to end its operation.

Kurdish protests against the offensive, which have drawn a few thousand people in large cities and a few hundred in towns, were hit by several incidents of violence that exposed the risk of civil unrest in a country that is home to three million people of Turkish origin, a third of whom are ethnic Kurds.

The car of a Turkish diplomat was set on fire in Berlin last week in a suspected arson attack, and Kurdish protesters attacked a Turkish-owned shop in Nuremberg and seriously injured a Turkish-German man with a knife near Cologne this week.

The unrest comes at a bad time for German intelligence agencies and police, who are on the alert for potential attacks by Islamist militants and under pressure to act against right-wing extremists.

The latter risk came to the fore earlier this month after an anti-Semitic far-right militant attacked a synagogue and a kebab restaurant in the eastern city of Halle.

“The last thing the government wants is to see the Syrian conflict spilling on to German streets,” said Burak Copur, a Turkey expert in Essen.

“There is also the risk of a new wave of Syrian refugees making their way to Europe. To put it plainly, in Germany, we are sitting on a powder keg.”

Kazim Erdogan, a Turkish social worker who runs a charity that fosters migrant integration in Berlin’s poor neighbourhood of Neukoelln, said existing friction within the Turkish community, which is divided between supporters and opponents of the Turkish president, makes it more complicated to ease ethnic tensions linked to the military offensive in northern Syria.

“The Turkish community in Germany is divided over the offensive in northern Syria, just like in Turkey,” said Erdogan, who is not related to the Turkish president.

“A minority of about 30% opposed to Erdogan doesn’t dare express critical views for fear of being labeled as traitors by Erdogan supporters.”

While Kurds press for tougher sanctions against Turkey and Turks insist Germany should stay out of its NATO-partner’s affairs, Syrian refugees, whose number in Europe’s biggest economy has topped 800,000, have their own set of demands.

A few streets away from the cafe where Turkish friends Bucak and Annak were having tea, Syrian Mohammad Ibrahim said Turkey’s declared aim to create a safe zone for refugees along its frontier with Syria was implausible.

“Erdogan wants to fight the Kurds. He couldn’t care less about Syrian refugees,” said Ibrahim, opening a soft drink can for his three-year-old son outside an Arab supermarket. “It hurts me to see the world going up in arms to protect the Kurds from Erdogan when for years they did nothing to protect the Syrian people from a murderous regime. It’s pure hypocrisy.”