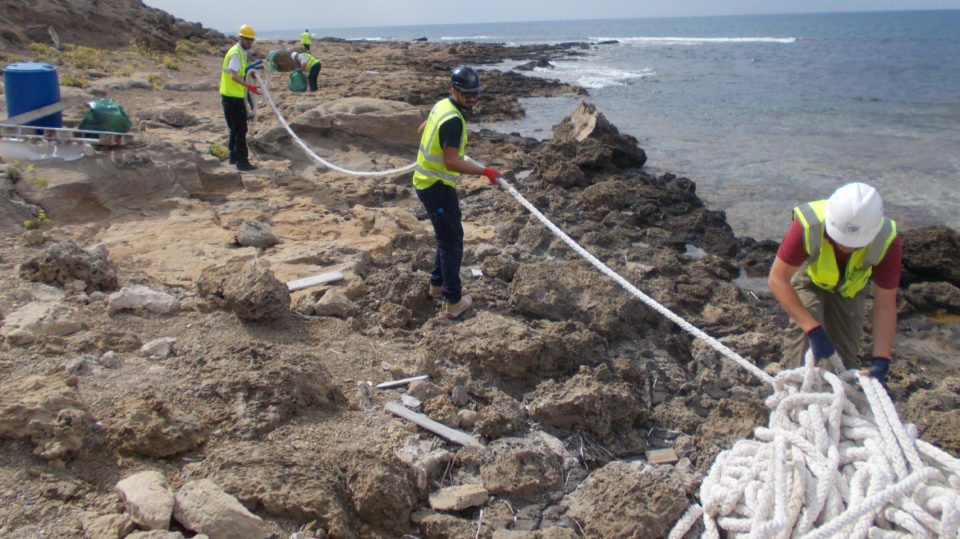 Staff from NG Bailey, a contractor based on the station, gave up their lunch breaks to remove various types of waste that had been washed up on the shoreline

Staff working at RAF Akrotiri have confirmed that 6,600 litres of waste has been cleared from beaches on the peninsular this week as part of a clean-up operation to help protect the environment.

Staff from NG Bailey, a contractor based on the station, gave up their lunch breaks to remove various types of waste that had been washed up on the shoreline.

The amount of waste products in the water, plastics in particular, has been widely condemned in recent years, with environmentalists fearing the catastrophic damage it is doing to the natural habitat.

Richard Johnson, the Environmental Manager for NG Bailey, who led the beach-clean alongside 22 other members of staff, explained why events like this are so important to protect the environment.

He said: “NG Bailey’s policy; part of our key performance indicators as a company, is the amount of positive return we can provide back to the local community.

“Regarding this event, we have focused on the protection of the environment and supporting the Sovereign Base Areas in enhancing the biodiversity of habitats within Western SBAs. It is a very important part of our mission here. Any work we do in Cyprus, we strive to leave the area in better condition than when we found it.

“In addition to the obvious benefit to the local marine and coastal habitats; it was also a great team-building exercise and all staff are already looking forward to the next event and it has further raised awareness within our team of the impact of plastic pollution and energised them to work together to improve our shared environment.

“We love working in Cyprus; the island is truly beautiful and we want to keep it that way for future generations to enjoy as we do.”

During the clean-up, Johnson and his team removed plastic waste, shoes, snorkels, shipping waste – nets, rope – “lots of polystyrene”, half a windsurf board, drift wood and pallets, which Johnson said would be reused to create habitat improvement measures such as constructing ‘bee hotels’ and reptile habitats

But it was the amount of plastic and microplastic found in the water that is clearly causing most concern to environmentalists.

He continued: “Clean-ups like this are so extremely important. Until we as a society either eliminate plastic waste or improve our waste management of it, beach cleans such as this, unfortunately, are the only impactful option we have as individuals and a company to protect our environment and ourselves from plastic waste.

“Whilst a lot of the items collected were large and obvious in origin, an equal amount was showing signs of significant degradation. As plastic erodes it breaks down into smaller and smaller pieces called microplastic, which is shown to be within the food chain and as we humans sit at the apex, microplastic is inside us too.”

“According to the UN, there are as many as 51 trillion microplastic particles in the seas, 500 times more than stars in our galaxy and they can be ingested by marine animals. The plastic then accumulates and can end up in humans through the food chain and have been found in food and drinks, including beer, honey and tap water.

“The effect on human health is as yet unknown but plastics often contain additives, such as stabilisers or flame-retardants, and other possibly toxic chemical substances that may be harmful to the animal or human ingesting them.

He said: “A huge thank you to all our staff that turned out on the day; you gave up your time and you made a real difference.”

Man charged with spate of break-ins