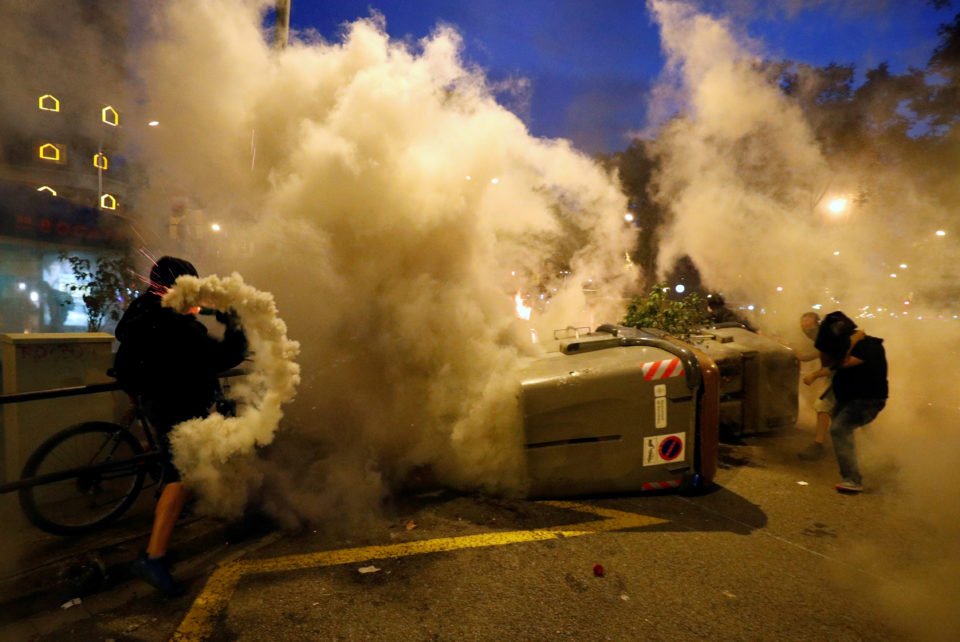 A Spanish judge ordered the closure of a secretive Catalan protest group’s website on Friday as authorities scrambled to find who is behind street demonstrations that have turned unusually violent.

The sentencing on Monday of Catalan separatist leaders to lengthy jail terms set off the worst street violence Spain has seen in decades, with protesters burning cars and throwing petrol bombs at police in the Catalan capital Barcelona.

Attention has focused on Democratic Tsunami, a new group that emerged last month and quickly gained a huge social media following. Its main action was a massive protest at Barcelona airport on Monday, which caused dozens of flight cancellations.

“The Judicial Authority has told operators to stop serving the domains in which the #Tsunamidemocratic Platform is based … since they could favour the commission of crimes,” police said on Twitter.

The group immediately moved its homepage to a new address. It was not clear if the court would try to close that too.

Democratic Tsunami says it is non-violent and accused authorities of censorship in a post on Telegram in which it confirmed its original website was blocked and recommended followers visit another site.

The group has not said who runs it, prompting an investigation by Spanish authorities.

The group officially emerged on Sept. 2 on Twitter and was quickly endorsed by separatist politicians, including former Catalan regional leader Carles Puigdemont, who lives in self-imposed exile in Belgium.

Democratic Tsunami told Reuters it is a “horizontal and adaptable network” of people living in several countries, without a leadership. It said it had held on-and-off contact with secessionist parties and groups to inform them of its intentions.

Its answers to questions were provided by email before the judge’s order to close its website.

The group’s main goal is to get Spain to negotiate on the right to Catalan self-determination and to achieve freedom for jailed Catalan separatists and those living in self-imposed exile, it said. Its protests would continue as long as needed, it added.

A government source said authorities were investigating whether Puigdemont could be behind Democratic Tsunami.

The group declined to comment on this, while Puigdemont denied it. “I absolutely don’t know who the organisers are,” he told reporters on Friday in Brussels, when asked if he had links with the group.

Democratic Tsunami’s call on Monday to “stop the activity of Barcelona’s airport,” on the day after the jail sentences were announced, represented a shift in the separatist movement’s tactics away from peaceful marches.

The airport protest also showed a highly sophisticated organization and technological capacity that resembled the preparation of a banned Catalan independence referendum in 2017, said Enric Lujan, political sciences professor at the University of Barcelona.

Democratic Tsunami said it will announce its next actions through an app that can only be downloaded on its website and shared through a QR code. The goal is to try to avoid a shutdown by authorities or infiltration by police, said Lujan, who had tested it.

Separatist leaders have condemned the violence and stressed the movement’s peaceful approach.

The protests that led to serious clashes between protesters and police this week were not called by Democratic Tsunami but by other secessionist groups.

The street riots could be linked to anarchist groups, a Spanish police and a government source told Reuters. They communicate through private channels on social media and likely have connections outside Spain, the police source said.