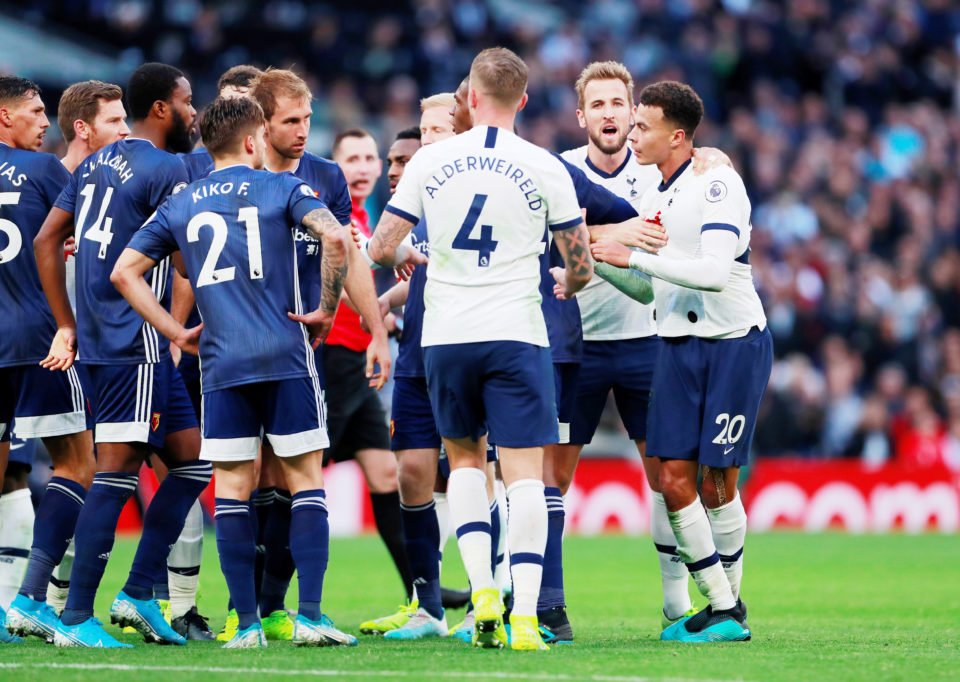 Tottenham Hotspur snatched a 1-1 draw at home to Premier League basement club Watford on Saturday thanks to a fiercely contested late strike from Dele Alli that was awarded after a VAR review.

Alli pounced on a lapse from Watford goalkeeper Ben Foster and used his shoulder to control the ball before firing into the empty net in the 86th minute, cancelling out Abdoulaye Doucoure’s sixth-minute opener for the visitors.

Watford, who had had a penalty claim turned down when Gerard Deulofeu was felled by Jan Vertonghen, claimed Alli had used his arm and were incensed by the turnover, which left them still without a win after nine Premier League games.

Spurs’ only chance in a drab first-half display was a tame shot from Alli which was easily saved by Foster.

Embattled Spurs coach Mauricio Pochettino turned to Son Heung-min at the start of the second half and the South Korean nearly equalised when he smashed a high shot at goal which Foster turned on to the crossbar.

Spurs looked headed for a third straight defeat following a 7-2 humiliation by Bayern Munich and a 3-0 loss at Brighton and Hove Albion until Foster failed to grab a loose ball and Alli took full advantage.

Tottenham are seventh in the Premier League standings on 12 points after nine games. Watford remained bottom on four points.

Wolverhampton Wanderers’ Raul Jimenez scored from the penalty spot to cancel out a second-half goal by Southampton’s Danny Ings in an entertaining 1-1 Premier League draw at Molineux Stadium on Saturday.

In-form striker Ings, who came into the clash having scored four goals in three matches in all competitions, punished Wolves for their poor defending by finding the bottom left corner with a right-footed shot in the 53rd minute.

Southampton’s advantage lasted only eight minutes as Wolves defender Matt Doherty was brought down in the penalty area with the Video Assistant Referee (VAR) confirming the foul, and Jimenez ended his goal drought with a crisp finish.

Bournemouth and Norwich City both kept their first clean sheets of the season as their Premier League clash at the Vitality Stadium finished 0-0 on Saturday after a game of precious few goal-scoring chances.

Bournemouth striker Dominic Solanke came closest to breaking the deadlock in the first half, but his effort in the 22nd minute was saved by Norwich keeper Tim Krul, who returned to the side following a recent back problem.

Quickfire goals from Gabriel Jesus and David Silva set up a comfortable 2-0 win for Manchester City over Crystal Palace at Selhurst Park as the Premier League champions closed the gap on leaders Liverpool to five points.

With Juergen Klopp’s side not playing until Sunday, Pep Guardiola sought to keep up the pressure by making four changes after two City defeats in four league games.

Two of the newcomers, Bernardo Silva and Jesus, combined beautifully for the first which the Brazilian headed in off the post from close range on 39 minutes — his 50th goal for the club .

City doubled their lead within 30 seconds of the restart when David Silva got on the end of a delightfully dinked pass from Raheem Sterling.

After the break, Palace keeper Wayne Hennessey excelled to keep out both Jesus and Bernardo Silva as Sterling continued to find space and City, with Kevin De Bruyne outstanding, looked capable of scoring with every move.

At the other end, City stopper Ederson was at full stretch to tip Christian Benteke’s header onto the crossbar.

“Hopefully, we can start from here and continue our good performance,” Guardiola said. “Their keeper made a lot of saves but hopefully we can be more clinical.”

City‘s manager was delighted his makeshift centre-back pairing of Fernandinho and Rodri did not concede a goal.

“Our build-up was quicker because they have more intelligence and they pass the ball so well because they are central midfielders,” he said.

Guradiola’s defensive crisis has been eased by the return of John Stones, who played the final 10 minutes after recovering from his thigh injury.

Palace manager Roy Hodgson said: “I was proud of the way we kept going and didn’t give up. We gave them as good a game as we were capable of.”

Egypt unveils biggest ancient coffin find in over a century