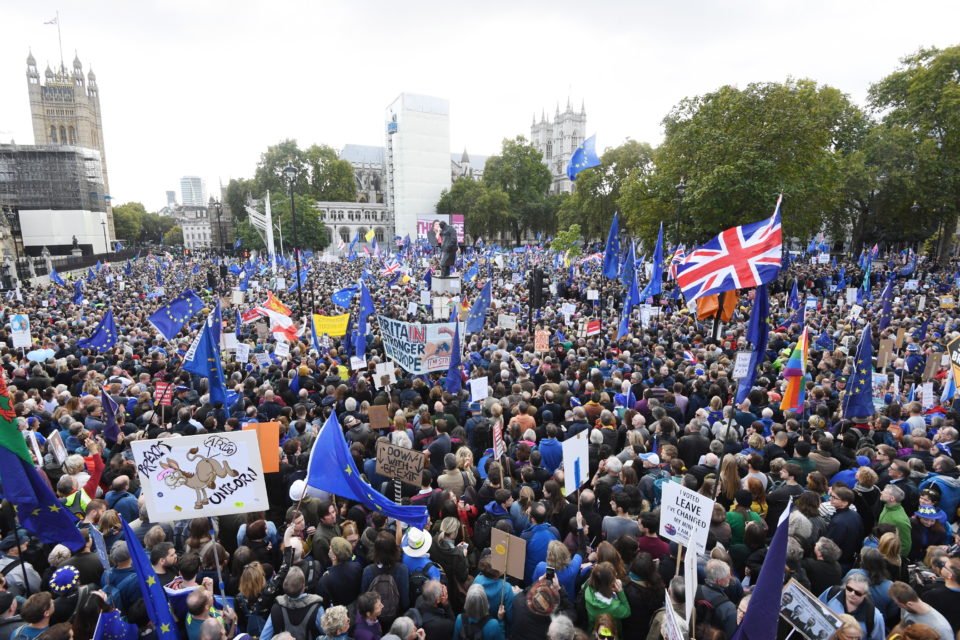 Hundreds of thousands of protesters marched through central London

By Dylan Martinez and Andrew MacAskill

“Hear us,” many of the protesters said outside the 800-year-old parliament building while others chanted “People’s vote”.

Hundreds of thousands of Britons had marched through central London towards parliament to demand a new Brexit referendum, with many crowding into the grass square outside to watch the result on a big screen.

“It’s something that needs a lot of scrutiny and it’s a mini win for the remainers. Everything is so finely balanced,” said John Warman, 53, a marine adjuster from West Byfleet.

Bill Venables, 58, who works for the local authority in Bristol in western England, said: “It’s good news that the opposition to Boris Johnson’s deal is solid because there were signs that it would melt away but it hasn’t.”

The protesters used a bizarre array of humour to lampoon Britain’s leaders, casting Prime Minister Boris Johnson’s chief adviser as a manipulating devil behind an EU divorce they view as the work of a privileged few.

The battle over Brexit spilled onto the streets of London when hundreds of thousands of people gathered to demand a new referendum while lawmakers decided the fate of Britain’s departure from the European Union.

Many turned to sometimes risqué British humour and their props ranged from exquisitely crafted effigies to battered empty boxes and a baguette.

Dominic Cummings, cast by his enemies variously as the puppet master of Brexit, Britain’s Rasputin or a political vandal, was made into a giant effigy of the devil, complete with horns and brandishing a glove puppet of his boss, Johnson.

“Demonic Cummings” was scrawled across the head of the effigy, pulled by protesters, some with berets sporting the stars of the European Union flag.

Another sign read: “I didn’t vote for Dominic Cummings”.

Other targets were the privileged financial backers of Brexit.

“Brexit is a billionaire con,” read one banner. “Brexit = Disaster Capitalism” read another.

Under the slogan “Eton Mess” one placard showed former Prime Minister David Cameron and Johnson, both of whom studied at Britain’s most privileged school – Eton College.

Eton Mess is the name of a British dessert made of smashed meringue, strawberries and whipped cream.

Cameron and Johnson were cast as “Horror and Lardy” in the pose of historic comedians Laurel and Hardy, complete with bowler hats.

Sex, of course, was one topic employed on Saturday, as peculiarly, were vegetables and fruit.

“Brexit is like consent – we can change our minds during foreplay,” read one placard. “Pulling out never works,” read another.

Younger and older demonstrators drew attention to the fact that Britain’s youth had overwhelming voted to remain in 2016, unlike the older generation.

“I’m here ‘cos my grandad voted leave,” read one sign.

“To my grandson, if Brexit still happens I’m so sorry, we tried our best,” read another sign.

“I was 17 in 2016, give me a vote on my future!” demanded one protester. Children marched with their parents holding simple crayon placards, asking to remain citizens of the European Union.

Other protesters made light of the fact that “remainers” have been portrayed as out-of-touch posh and wealthy residents of London and the southeast.

“I tried to make this sign funny but there’s no bigger joke than Brexit”, read another placard. (Writing by Guy Faulconbridge and Iain Withers Editing by Alexandra Hudson and Frances Kerry)

Man remanded after 47 cannabis plants found in his home

Have you seen this teenager

Canada to stop providing security for Harry and Meghan