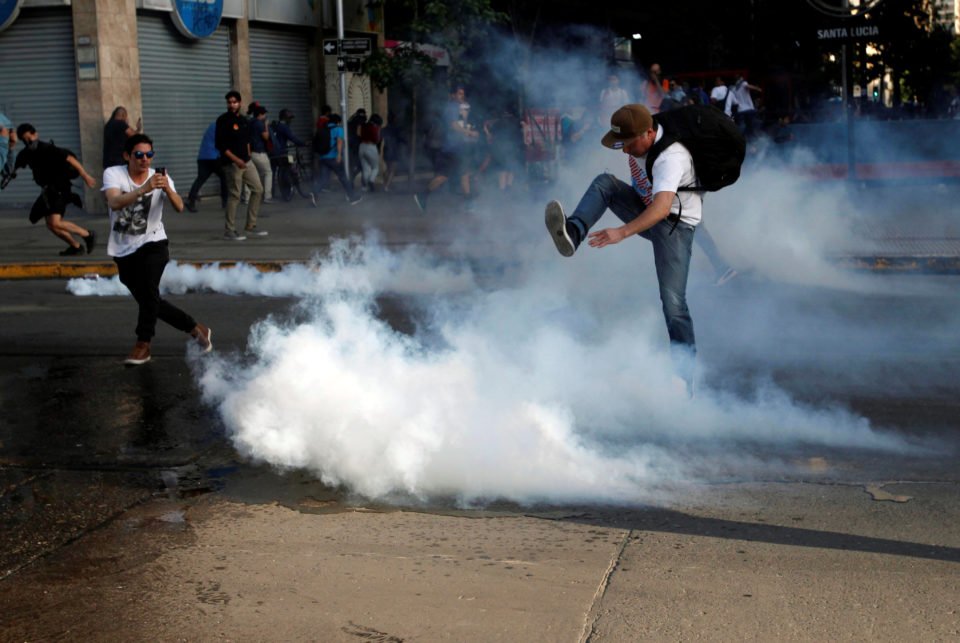 A demonstrator kicks a tear gas canister during a protest against the increase in the subway ticket prices in Santiago, Chile, October 18, 2019 REUTERS/Carlos Vera NO RESALES. NO ARCHIVES

Chile’s President Sebastian Pinera declared a state of emergency in the capital Santiago early on Saturday, as the city of 6 million descended into chaos amid riots that left a downtown building engulfed in flames and its metro system shuttered.

Pinera spoke to the nation in the early hours of Saturday, declaring an emergency lockdown as sirens filled the night air downtown, and police and firefighters rushed to contain the damage.

The center-right Pinera said he would invoke a special state security law to prosecute the “criminals” responsible for the city-wide damage, while at the same time saying he sympathized with those impacted by the rate hikes.

“In the coming days, our government will call for a dialogue … to alleviate the suffering of those affected by the increase in fares,” Pinera said in the broadcast address.

Chile is one of Latin America’s wealthiest nations, but also, among its most unequal. Frustrations over the high cost of living in Santiago have become a political flashpoint, prompting calls for reforms on everything from the country’s tax and labor codes to its pension system.

Enel Chile, a subsidiary of Italian utility Enel, said vandals had set fire to the company’s high-rise corporate headquarters downtown. Local television footage showed flames climbing up the side of the building as fire crews struggled to break through growing crowds of protesters.

The company said in a statement posted on Twitter that workers had been evacuated safely from the site.

High school and university students began the protests after the government hiked fares on Oct. 6 to as much as $1.17 for a peak metro ride, blaming higher energy costs and a weaker peso.

The protests turned increasingly violent on Friday afternoon, however, and by early evening, officials had closed down all of the city’s 136 metro stations, which connect more than 87 miles of track.

The metro system will remain closed through the weekend, with officials saying “serious destruction” made it impossible to operate trains safely.

Demonstrators clanging pots and honking horns clashed with police armed with batons and tear gas all across the normally subdued city late into Friday evening.

Metro management said there had been more than 200 incidents on Santiago’s subway system in the previous 11 days, mostly involving school children and older students jumping barriers and forcing gates.

Earlier on Friday, after a meeting with the metro chief and interior minister, Transport Minister Gloria Hutt told reporters the fare hike would not be reversed. She said the government subsidizes almost half the operating costs of the metro, one of Latin America’s most modern.

“This is not a discussion that should have risen to the level of violence that we’ve seen,” she said.

Brexit reversed: How could Britain end up with a second referendum?