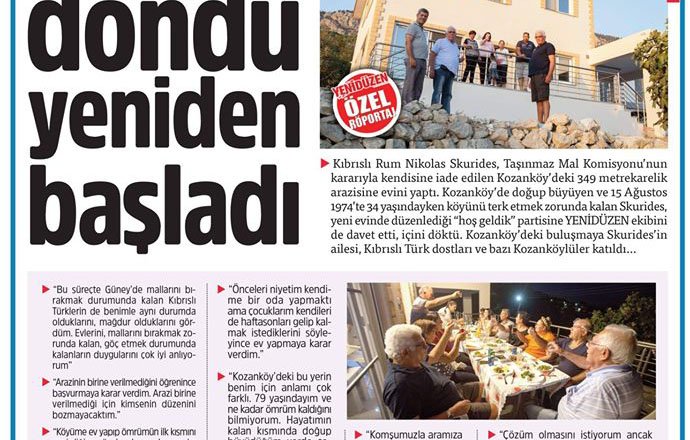 The 349 square metre plot was returned to Nikolas Skourides in September 2017 by the Immovable Property Commission (IPC) set up by Turkey in the north. According to a report in Turkish Cypriot daily Yeniduzen, a house has now been completed on the property.

“I’m 79 years old and I don’t know how much I have left. I want to spend time with my children and the rest of my life where I was born and raised,” Skourides was quoted by Yeniduzen as saying.

He said he wanted to spend the last part of his life in the village where he grew up.

“My intention was to make a room for myself, but when my children said they wanted to come and stay at the weekend, I decided to make a house,” Skourides told Yeniduzen.He left the village on August 14, 1974 and spent seven years reclaiming his property through the IPC, a body set up in the north to compensate Greek Cypriot refugees for their lost property.

When the crossings opened, he began going to the occupied areas two to three times per week, where he met almost all the Turkish Cypriots living in Larnaca tis Lapithou, with whom he maintains excellent friendly relations.

At the party pictured in Yeniduzen, Skourides was pictured with his family, Turkish Cypriot friends and people from the village.

Skourides said he applied to the IPC when he learned that his land had not been put to another use.Speaking about the Cyprus problem, he said: “I want it to be a solution, but I don’t see a solution too close. We’ve all made mistakes in Cyprus, we need to learn from them”.

When he first started work on the house it created tension with those living in the area. Lapithos ‘municipality’ halted the work, saying the construction had no ‘permit’. Residents of the village reportedly started collecting signatures to overturn the decision of the IPC.

Police had to go to the area after that poles marking Skourides’ land had been removed following complaints that they were blocking the entrance to a neighbouring house.

IPC Chairman Ayfer Said Erkmen then told Yeni Duzen that after going through Skourides’ application, he had contacted the security forces and implemented the decision after they were informed that the return could take place.

Erkmen said Skourides had secured the necessary ‘permits’ from the ‘interior ministry’, the ‘town planning department’ and the ‘municipality’.

According to Erkmen, 97.7per cent of the decisions taken to-date by the IPC concern payment of compensation, 1 per cent return of property, while the rest of the applications have been withdrawn.

Britain’s Raab: we have the numbers to pass a Brexit deal