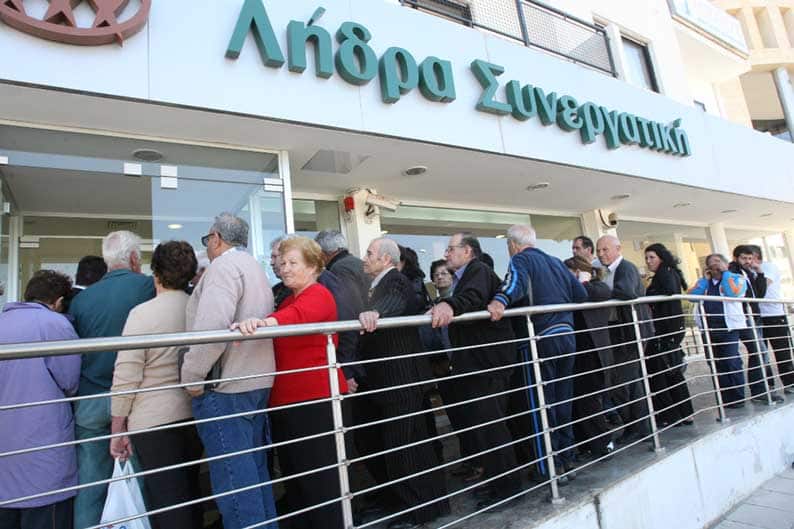 The queues outside the banks the day they reopened on March 28, 2013

WITH the passing of time, the economic meltdown of 2013 appears to have been banished from the collective memory and everyone is behaving as if it never happened. Yet it was only six-and-a-half years ago that Laiki Bank collapsed, the Bank of Cyprus bailed in its depositors while the state was looking for money to pay public employees. And it was a little over three years ago we exited the assistance programme, which put the economy on the path to recovery that has been astonishing, with annual growth rates of about four per cent and budget surpluses.

Since exiting the assistance programme, the economy is in rude good health, the roads once again congested with high-priced new cars, expensive restaurants are opening everywhere and another construction boom is in progress. Consecutive bumper years for tourism have boosted the recovery but the main contributing factor, according to most economists, has been the citizenship-by-investment scheme, which has generated in excess of €6 billion between 2013 and 2018, fueling the current construction boom. There is already talk of a property bubble.

Remarkable as the recovery has been, it has had a major negative consequence that cannot be measured or represented by economic indicators. It has given rise to the same complacency and short-termism that eventually led to the 2013 collapse. We are once again witnessing, without any concern expressed, the public sector payroll and pensions growing, approaching the €3 billion mark, which will be exceeded if the supreme court rejects the state’s appeal against the administrative court’s ruling on the 2012 public sector pay cuts. In the 2020 state budget, submitted 10 days ago, the public payroll is forecasted to be €2.88 billion, representing 31.3 per cent of state spending, and it is growing at a faster rate than state revenue.

As if this were not bad enough, there is also trouble brewing in the banking sector, the problems of which were main cause for the 2013 collapse. The bank employees union Etyk, after a few years of untypically responsible behaviour, has reverted to its pre-recession militancy, insisting on calling the shots and making the usual across-the-board pay demands it knows would jeopardise the future of the banks at a time of increased competition, narrow profit margins and an unhealthy proportion of NPLs in their loan portfolios. Yet the union is behaving as if the banking sector is the same as it was 15 years ago, refusing to accept the market has radically changed and that the banks are no longer in the robust economic position to display the reckless generosity of those times.

Hellenic Bank has tried to make some changes to its pay structures and Etyk responded with a 24-hour strike. The Bank of Cyprus has still been pandering to the union to ensure Etyk does not undermine its voluntary retirement scheme that will lay off 400 staff, albeit at a big cost to the bank. Compensation up to €200,000 has been offered, with the state exempting the pay-off from tax in order to make it as attractive as possible to employees. Can a bank weighed down by NPLs, in a period of record low interest rates be so generous in getting rid of staff? No, but like the state in its dealings with public employees, the Bank of Cyprus is acting as if it had not been through the worst crisis in its history a mere six-and-a-half years ago.

The tragedy is that both the state and the banks had the opportunity to rationalise their pay structures and reward systems in 2013 when the economy was deep in recession and the unions would have accepted the changes without protest. This would have put wages and pensions on a healthier basis, more in step with other wages and in line with the size of the economy. The Anastasiades government did not have the political courage to take such a step because the president was more concerned about his re-election, five years later, than the medium- to long-term benefits for public finances. The banks’ failure to seize the opportunity is even less defensible, bearing in mind they needed investments of hundreds of millions to survive the crisis.

It seems our leaders’ talent for missing an opportunity does not apply only to the Cyprus problem. Their failure to permanently cut the public payroll when the opportunity presented itself means that the problem will stay with us, putting extra strain on public finances every year until we reach crisis point yet again. Political complacency will ensure this happens.

Egypt unveils biggest ancient coffin find in over a century

Digital economy in Cyprus has a long way to go