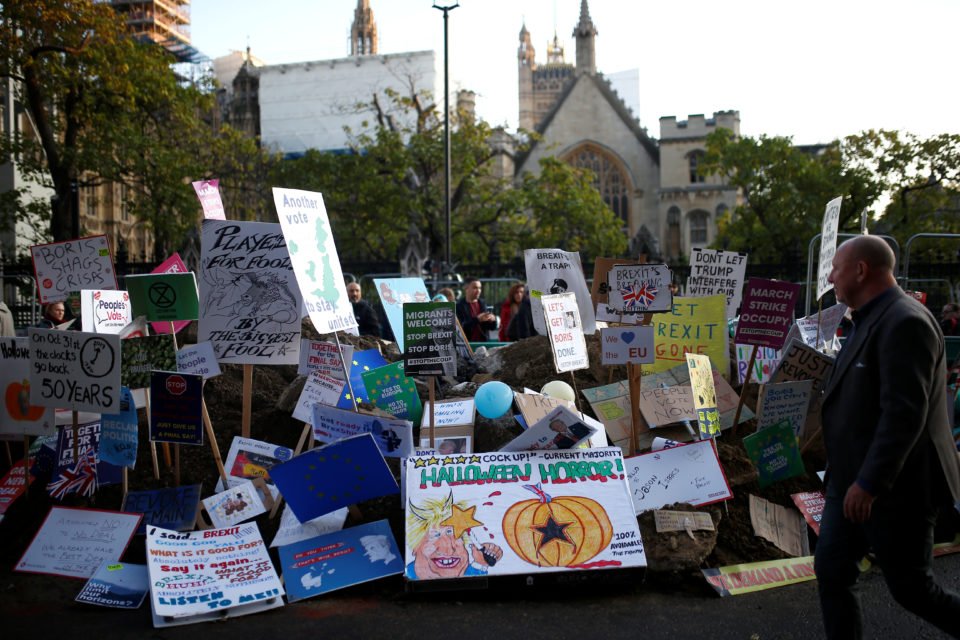 A man walks past placards from a demonstration that were placed together outside the Houses of Parliament, after parliament discussed Brexit, sitting on a Saturday for the first time since the 1982 Falklands War, in London, Britain, October 19, 2019. REUTERS/Henry Nicholls

By Elizabeth Piper and Kylie MacLellan

LONDON, Oct 19 (Reuters) – Prime Minister Boris Johnson sent an unsigned letter to the European Union requesting a delay to Britain’s exit from the bloc and also said he did not want the extension after his latest Brexit setback in parliament on Saturday.

Johnson had previously said he would rather be “dead in a ditch” than ask for any extension to the Oct. 31 deadline.

But he was compelled, by a law passed last month by opponents, to send a letter to the bloc asking to push back the deadline to Jan. 31 after lawmakers thwarted his attempt to pass his EU divorce deal on Saturday.

A government source said Johnson sent a total of three letters to Donald Tusk, the president of the European Council: a photocopy of the text that the law, known as the Benn Act, forced him to write; a cover note from Britain’s EU envoy saying the government was simply complying with that law; and a third letter in which Johnson said he did not want an extension.

“I have made clear since becoming Prime Minister and made clear to parliament again today, my view, and the Government’s position, that a further extension would damage the interests of the UK and our EU partners, and the relationship between us,” Johnson said in the third letter, published on Twitter by the Financial Times’ Brussels correspondent.

Here is a text of the unsigned letter that Johnson was required to send under the Benn Act.

The UK Parliament has passed the European Union (Withdrawal) (No. 2) Act 2019. Its provisions now require Her Majesty’s Government to seek an extension of the period provided under Article 50(3) of the Treaty on European Union, including as applied by Article 106a of the Euratom Treaty, currently due to expire at 11 p.m. GMT on 31 October 2019, until 11 p.m. GMT on 31 January 2020.

I am writing therefore to inform the European Council that the United Kingdom is seeking a further extension to the period provided under Article 50(3) of the Treaty on European Union, including as applied by Article 106a of the Euratom Treaty. The United Kingdom proposes that this period should end at 11 p.m. GMT on 31 January 2020. If the parties are able to ratify before this date, the Government proposes that the period should be terminated early. Yours sincerely, Prime Minister of the United Kingdom of Great Britain and Northern Ireland”

Johnson, for whom delivering Brexit is key to his plan to hold an early election, said he was confident that the process of getting the Brexit legislation through Britain’s parliament would be completed before Oct. 31, according to the letter.

Tusk said he had received the request from Johnson.

“I will now start consulting EU leaders on how to react,” he said on Twitter.

“He signalled a delay would be in no one’s interest,” the official said.

However, it was unlikely that the EU’s 27 members states would refuse Britain’s delay request.

Johnson had hoped that Saturday would see recalcitrant lawmakers finally back the divorce deal he agreed with EU leaders this week and end three years of political deadlock since the 2016 referendum vote to leave the bloc.

Instead, lawmakers voted 322 to 306 in favour of an amendment that turned Johnson’s planned finale on its head by obliging him to ask the EU for a delay, and increasing the opportunity for opponents to frustrate Brexit.

Johnson has previously promised that he would take the country out of the bloc on Oct. 31, without explaining how he would do this while also complying with the Benn Act.

“I will not negotiate a delay with the EU and neither does the law compel me to do so,” he told parliament after lawmakers backed the amendment on Saturday.

Opposition politicians accused him of believing he was above the law.

“Johnson is a Prime Minister who is now treating Parliament and the Courts with contempt,” John McDonnell, the opposition Labour Party’s finance spokesman said.

“His juvenile refusal to even sign the letter confirms what we always suspected that Johnson with his arrogant sense of entitlement considers he is above the law and above accountability.”

Scotland’s highest court is due to consider on Monday a legal challenge that had sought to force Johnson to comply with the Benn Act. The court said earlier this month that government lawyers had given formal legal statements that he would abide by the Benn Act and it would be a serious matter if he did not.

“Boris Johnson promised #Scottish court he would comply with #BennAct & not seek to frustrate it. Looks like he’s breaking both promises,” Joanna Cherry, a Scottish National Party lawmaker involved in the case said on Twitter.

Wales have more strings to their bow these days, says Adams