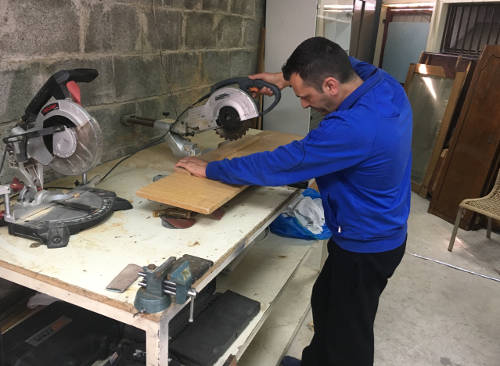 Furniture being fixed up for sale in the Reto workshop

Since 2010 religion, via the Reto rehabilitation programme, has helped drug addicts in Cyprus sober up

A heavy, sustained dose of religion is not the antidote for all drug addicts desperate to clean up but when it works, it can last the rest of a lifetime

“Before coming to Reto I tried many times to quit and I failed, mainly because I did not really want to. My main problem was not simply heroin, but the fact that I was away from God,” said Giorgos Christopoulos, 41, who has now been sober for 14 years.

“I started using when I was 15 years old. Usually drugs force you to other illegal acts and that was the case with me. I was devastated in my heart. I did not feel I deserved to be alive. In Reto I found a family through God’s words and I stopped using when I was 27.” 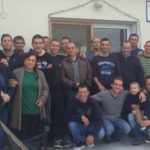 Reto is a Christian drug rehabilitation programme which treats and supports substance abusers in a house largely funded by a hugely successful secondhand furniture business run voluntarily by former addicts.

The full name of the programme is “Reto a la Esperanza” and translates as “Challenge to hope”. The non-profit organisation started in Spain in 1985 when a Christian man took into his house a young drug addict and helped him. The boy in turn brought some of his friends who were also drug users and the first Reto house was created. Reto currently offers free drug rehabilitation in 35 countries. In 2010, a house was opened in Nicosia by one Spanish and two Greek volunteers.

“It is very difficult for Cypriots to come out as drug addicts because it is such a small community. Parents refuse to stigmatise their children and try to help them in their own way, but due to the sensitive parent-child relationship, addicts need a different, more intensive kind of help,” Christopoulos told the Sunday Mail.

During a Reto rehabilitation programme, participants and volunteers live together in houses – in Cyprus’ case a house in Nicosia district – that become small communities. It offers no drug substitutes and all of them share the chores and responsibilities.

“Addicts find a new family in the house with people who understand what they are going through, and work together for a common purpose,” explained the 41-year-old volunteer.

All the funds come from a handful of donations and some small house repairs the volunteers make, but they depend mainly on the secondhand shop for financial support.

The Reto shop is located in Egkomi’s industrial area in Nicosia. Volunteers arrange free pick-ups of unwanted used items such as furniture or electrical appliances which they repair in a small workshop in the back of the shop and resell.

“We see ourselves in all the items we take in. We were once found exhausted, thinking we were not worthy of help and God gave us a second chance,” said Christopoulos. “If we see an item that is completely ruined, we will try to fix it before throwing it away, like that day when a stranger gave us a Reto leaflet, an opportunity to become the best version of ourselves.”

He explained that the University of Nicosia had offered free lessons on refrigeration engineering, for example, so that volunteers could learn to fix electrical items for resale.

The secondhand shop operates daily from 9am until 7pm and Saturdays 9am until 1pm with four volunteers. Many customers who come at the shop become friends with the staff and at times just come for a coffee and a chat with them.

It has become a huge success, averaging 50 customers a day – mostly students and migrants – all attracted by the cheap prices.

Those looking for something special can even find the odd antique.

Volunteers also travel every Saturday to the small bazaar in Germasoyia, Limassol to sell some of the smaller items.

“When a person is interested in entering the drug rehabilitation programme, they call us and they come to the shop for a personal interview. We have enough experience to tell if the person genuinely wants to change. Sometimes situations push people to rehabilitation, for example a court order, but forced rehabilitation never works,” he said.

The programme is completely free but has some strict rules for entry. Apart from drugs, alcohol, gambling and smoking are all forbidden.

“There are times when people feel they do not want to quit smoking and that stops them from participating in our programme and helping themselves,” said the volunteer.

The house usually accepts people above 18, unless their guardian signs them in with their consent and only accepts male addicts, but if a woman user needs help, she can attend some of the meetings or the organisation arranges to send her to Athens where there is a house only for women.

The Reto programme is separate from the better known Ayia Skepi centre, which does accept women, but they both collaborate under the umbrella of Cyprus National Addictions Authority by referencing patients to each other. Reto collaborates with volunteer GPs, psychologists and psychiatrists as well as Athalassas psychiatric hospital.

Once addicts agree to abide by the rules of the religious community, they are admitted immediately to the house, and the rehabilitation period begins. The treatment lasts from eight to 12 months and after users pass the three stages of rehabilitation – detox, rehab, recovery – people can decide to stay longer.

For the past two years the house has been in Ayios Trimithias and has the capacity to host 35 people.

There are about 25 men in Reto’s programme at the moment, mainly Greeks with some Cypriots, Russians, Romanians, Bulgarians, among other nationalities.

The volunteers always work in teams of two, a person who recently entered the programme and a responsible partner with more years’ experience in volunteering to get all the chores done. Two people are usually in the van picking up furniture, four people usually work in the store and others in pairs get housework done and the cooking.

All the volunteers and the participants of the rehabilitation programme who live in the house wake up at 7am. They have breakfast together, a daily meeting and then get on with their assigned jobs.

The first weeks in the house are part of the adjustment period for newcomers and they usually do not participate in any activities until they pass the withdrawal syndrome.

During the weekends volunteers usually arrange excursions or day trips and on Sundays they often distribute leaflets in different places.

“We have a friend who is a famer living nearby and we have under our care some pigs and a cow which keep volunteers in touch with nature,” said Christopoulos.

For participants the hardest part of being a Reto volunteer is losing from overdoses those who have failed to stick with the programme.

But those who succeed, like Christopoulos, find their lives have been transformed.

“I have been in Reto for four years in Greece and one year in Cyprus as a volunteer,” said Nestoras. “Reto’s ground is Christianity and our leader is the holy book.”

Bakas Panayiotis said that he felt the need to come to Cyprus as a volunteer after he received the help and support he needed for free.

“I have been in Reto since 2012 in Greece and in my heart, I want to offer help because the organisation put my life in order,” he said.

“In the beginning I reacted negatively to help, like most substance users. When I started opening up, some volunteers talked to me about Jesus saying he is the only one who can save me. That put me off and I started being suspicious of the organisation. However, after my personal research of the Bible, I looked at those people who have helped me and I realised they were right.”

Much of Reto’s informative material is in English and some volunteers speak foreign languages therefore non-nationals can easily participate in the programme.

An annual door-to-door anti-drug campaign by Reto starts in Nicosia at the end of October where four-member teams will distribute a 2020 calendar to raise drug awareness.