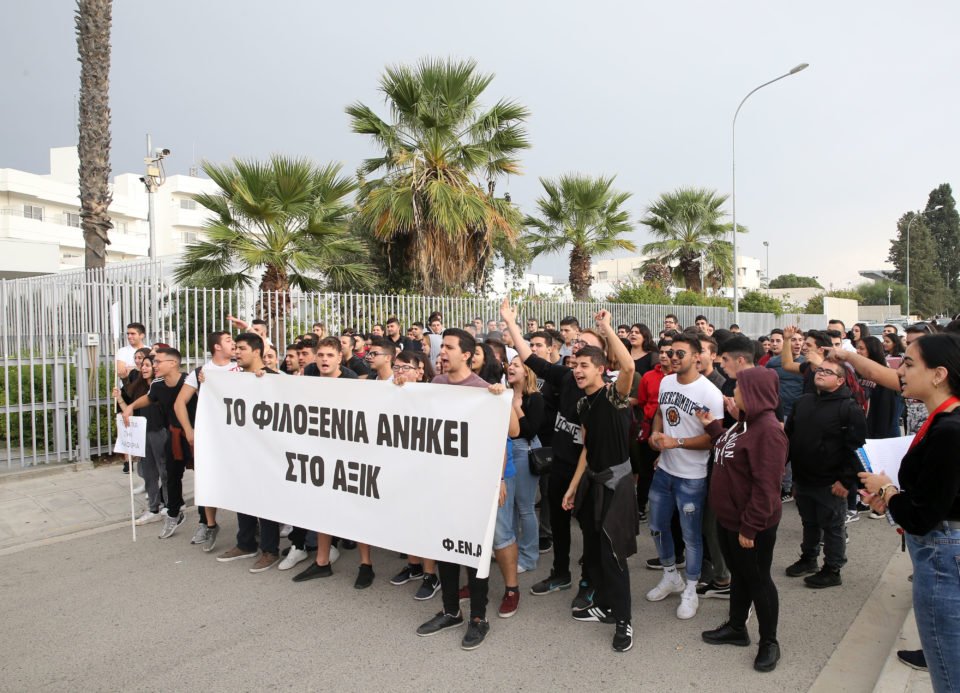 The students’ union of the Higher Hotel Institute (HHIC) demonstrated on Tuesday demanding the government rethinks its decision to convert the Filoxenia conference centre into a commercial court.

Students, who protested outside the building, want HHIC to have Filoxenia as an expansion, which would solve several problems for them due to lack of space at the adjacent building where they study gastronomy.

Protesters were holding banners saying “Hands off the Filoxenia” and “History is not forgotten, Filoxenia belongs to the Higher Hotel Institute”.

“During the bidding process for the conversion of the Filoxenia to courts, it was clear both from the majority of political views and from relevant bodies such as Pasyxe [the Cyprus Hotel Association], that the bidding must be stopped and Filoxenia must be given to the HHIC,” said student’s union leader Panayiotis Karatzias in a prepared statement.

The facility can cover the needs of the institute, and be used as boarding accommodation, laboratories and classrooms, while it would help the effort by the institute to upgrade the curriculum, such as the creation of a four-year-degree.

Unfortunately, Karatzias said, the government considers Filoxenia’s conversion to a court more important than the need of HHIC and its students.

“Students of HHIC cannot continue to be deprived of recognition and upgrading of their diploma. So again we urge you to immediately freeze, since you do not want to permanently stop it, the whole process regarding the Filoxenia centre and to re-examine the matter for your own benefit and of all involved,” he added.

The HHIC, which is a tertiary educational institute offers programmes in hotel and catering studies, is located in Aglandjia on a hill next to the Filoxenia conference centre, in the same area as the old campus of the University of Cyprus.

The hotel industry has supported the idea that the HHIC be moved to a coastal location where tourism is booming, while the Paphos municipality has also shown an interest in housing it.

Buffer Fringe Festival to explore the space in between