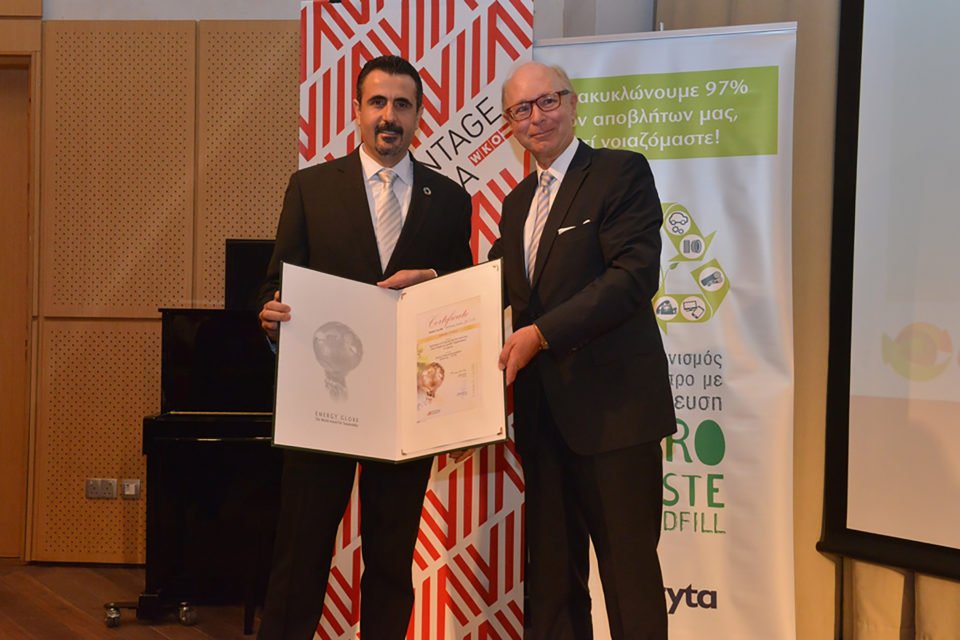 The Cyprus Telecommunications Authority (Cyta) was on Tuesday awarded for sending “Zero Waste to landfills” as part of the National Energy Globe Awards, an international endeavour with 187 participating countries.

Cyta is the first organisation to receive the National Energy Globe Awards for “Zero waste to landfill” for recycling or reusing 97 per cent of its waste.

The initiative by Cyta followed Cyprus’ adoption of the UN’s 2030 Agenda to achieve sustainable development.

The award ceremony took place at Cyta headquarters in Nicosia with the participation of Environment Minister Costas Kadis along with Austrian Ambassador Eva Maria Ziegler and the Head of the Commercial Department at the embassy Gerd Dueckelmann-Dublany.

“The main challenge is to change the habits of people. National Globe Awards taught us that habits can be changed,” Dueckelmann-Dublany said.

The National Energy Globe Awards began in Austria in 1999 and are currently the most prestigious environmental awards given out. It is divided into two sectors, the National and the Worldwide Awards. National winners receive a certificate signed by Energy Globe Jury chairperson Maneka Gandhi and initiator Wolfgang Neumann.

This year, the Energy Globe Awards saw 2,000 participants from 187 different countries, out of which 153 projects were awarded. Cyta was one out of five Cypriot contenders.

“I commend all those people who want to take initiatives and set an example for others,” said Dueckelmann-Dublany who also congratulated the initiative of Theodoulos Makriyiannis, the Head of Corporate Social Responsibility at Cyta who was in charge of the project.

The environmental procedures of the entire company are checked before the publication of the certificate. The ‘Zero waste to landfill’ certificate is given when the organisation recycles or reuses more than 95 per cent of its waste.

Makriyiannis introduced Cyta’s environmental projects such as the environmental corner in Cyta’s headquarters where all the staff can bring their recyclables.

“The corner has been embraced by our staff to the point where we are having trouble emptying the bins,” he said.

Apart from urging staff to adopt environmental-friendly habits, Cyta is attempting to create environmental consciousness in their children as well.

“We organised a theatre workshop and tree planting for children to raise their environmental awareness,” Makriyiannis said.

Cyta also plants one tree for every ten Cytavision connections.

Kadis focused on the extension of Cyta’s initiative island wide with the introduction of more green points and the “pay as you throw” method.

“The ministry supported and continues to support similar environmental projects in Cyprus,” he said.

Chairman of Cyta Rena Rouvitha Panou spoke about the importance of corporate social responsibility and noted that Cyta offered reduced charges to about 37,000 citizens with low wages.

“A strong business should not work against a better society but work towards sustainable development that is anthropocentric and has nature as its centre,” she explained.

Cyta was also awarded in the Cyprus Responsible Business Awards 2019 with two gold awards for sustainable apps and two silver awards for its green buildings.