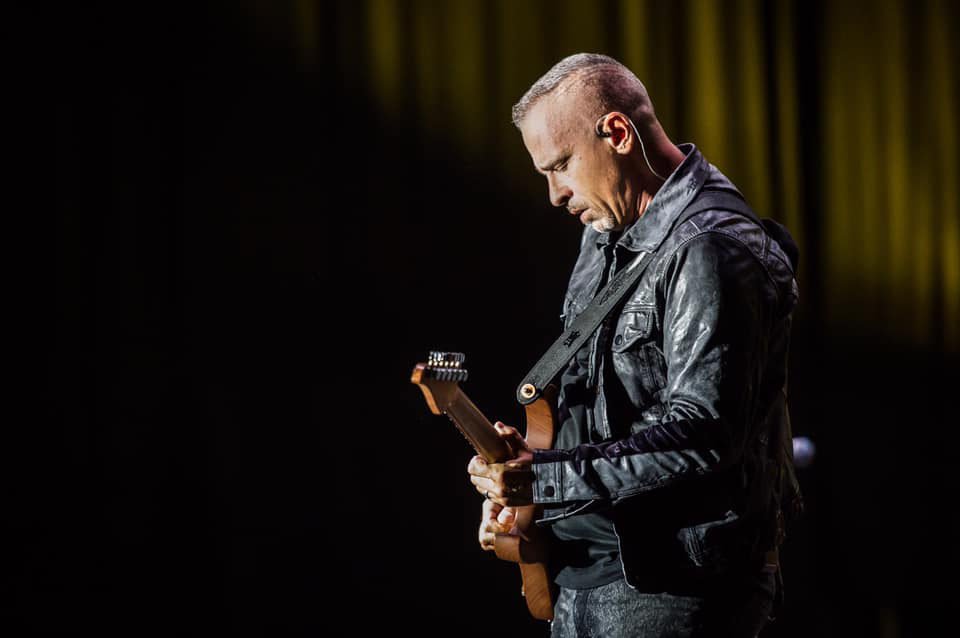 You know the voice. You’ve felt the tingles. And now, for the very first time, you can feel the passion in person. Because Eros Ramazzotti, king of the love song, Italian pinup, and all-round heartthrob, will be here in Cyprus next month as part of his latest world tour, performing live for One Night Only! If you’ve ever been moved by the singer’s smooth stylings, then this is an unmissable event.

For many of those no-longer-quite-in-the-first-flush-of-youth, Ramazzotti epitomises the romantic dream; a sort of musical version of Roman Holiday, conjuring up dreamy Italian abandon, hedonism and passion with every note… ‘Non siamo soli’, ‘Un’altra te’, ‘Terra promessa’, ‘Parla Con Me’, ‘Unastoria importante’, ‘Non ti prometto niente ‘, ‘La nostra vita’ – just a few of the maestro’s best-known (and most widely-swooned over) efforts. Which he will no doubt be singing on November 7, here in Cyprus.

Performing at the Spyros Kyprianou Athletic Centre in Limassol, Ramazzotti is currently on a world tour (fresh from Scandinavia and heading to South America at the start of 2020) to promote his new album. Entitled Vita Ce N’è (There is Life), it’s the latest in a long line of successful releases spanning the last few decades.

Born in the ‘eternal city’ of Rome in 1963, Ramazzotti has been in the music game since the early 80s. But the real notoriety came a decade later with the release of the album Tutte Storie, which amassed five million in sales and occupied a top five slot in every country in which the singer had previously released his work. The success led almost immediately to a BMG International record contract, and the rest – as they say – is history…

11 studio albums, one EP, three compilation albums, three live albums, and 37 singles, totalling more than 60 million record sales over his 30-year career have netted the singer a personal fortune in the millions. $30 million is the figure most often quoted, though a number of sources speculate this might actually top out a great deal higher, at approximately $58 million in combined earnings. People With Money magazine suggests Ramazzotti is – as of this year – the highest-paid singer in the world thanks to his fortune in stock, substantial property holdings, lucrative endorsement deals, several restaurants, football team, own brand vodka (Pure Wonderamazzotti), fashion line, and the recent launch of a perfume called With Love from Eros.

It is, of course, Ramazzotti’s unique voice (and possibly his penchant for wearing see-through white shirts on his album covers!) which has netted him such wealth and fame… Lauded for his energetic delivery of catchy, melodic tunes (often passionate, mid-tempo, autobiographical ballads with instrumentation rich in soft-rock influence) he’s recorded with all the greats: Cher, Tina Turner, Andrea Bocelli, Joe Cocker, Julio Iglesias, and even Luciano Pavarotti.

This tour, however, is a solo effort, and comes to Cyprus courtesy of Moonlight Show Productions and Mosaic Entertainment. Touting Ramazzotti as “the most famous and successful Italian artist of the past three decades,” Moonlight promises us “an unforgettable evening full of huge successes in the context of a great world tour for the promotion of the singer’s new album.

“Ramazzotti’s new world tour is being added to his already dozens of super-successors,” we’re told, “bringing to five continents a fantastic show that began in February 2019 from Munich, visiting dozens of major European countries as well as North and South America.” Quite the extent of his local popularity, we won’t know until November. But it’s worth noting that tickets are already selling like hot panettone. And with less than a month before the Italian heartthrob arrives on the island, it might be worth snapping up your ticket now. How often are you going to get to spend One Night Only with Ramazzotti?