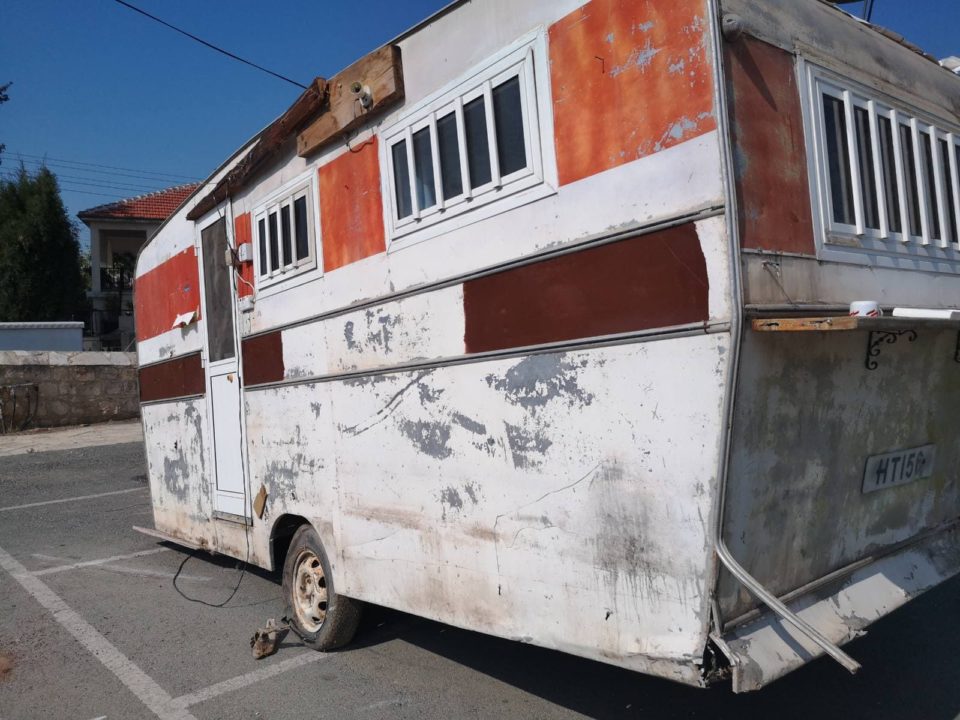 Zenon Neophytou's caravan is being held outside the community leader's office

The community leader of Neo Chorio on Monday defended the forced removal of caravans belonging to Akamas’ last illegal camper over the weekend, saying all such campers had been told weeks ago that they had to leave.

Zenonas Neophytou had four caravans in the spot near Aphrodite’s Baths and accused the community council workers of using violence against him in their attempt to empty and clean the area.

Neo Chorio council sent six people on Friday with vehicles to remove Neophytou’s caravans. He said the workers immobilised him using violence and took his phone as they towed his caravans from the site. He also claimed that the workers brought a chainsaw and cut down a big branch of the carob tree under which his caravan was parked.

The illegal use of the area for camping and entertainment has been going on for decades with caravans parked there permanently, even though Akamas is a nature conservation area and has no facilities which has led to the illegal dumping of rubbish.

Neo Chorio community leader Andreas Christodoulou had given a September 15 deadline for all the caravans to be moved.

On September 21, after owners refused to shift them, the community council removed 42 caravans from the site. Owners were obliged to pay €100 each to get them back to cover towing expenses.

Just Zinonas Neophytou, the last camper in the area, held out, also renting out three other caravans to visitors.

“He never paid the community to pick up his garbage. He dumped his waste down a cliff into the sea,” Chistodoulou said on Monday.

“He was also sent a letter with a lawyer asking him to leave but he would not comply with it. He is still in Aphrodite’s Baths, sleeping in a tent,” he added.

Police are investigating the incident, while Neophytou’s caravan is being held outside Christodoulou’s office.

The Green party has raised concerns over the treatment of Neophytou.

Andreas Evlavis, Paphos secretary of the Green Party, told the Cyprus News Agency that “We are not here to check if Neophytou was using the region as his permanent residence for the last 30 years, legally or illegally. What matters is that the way they removed him from the area was violent and illegal.

“We call on the police to investigate the incident in depth or else the law of the jungle will prevail in the area.”

Christodoulou is currently preparing a letter to sent to the House of Representatives to demand a significant increase in fines for campers and caravans in the area. The proposed fines will also include the presence of dogs in the beaches of Akamas that are not assigned as dog beaches as well as barbecues and will start from €10,000.

At present, the highest current fine the community can impose for illegal camping and polluting the Akamas area is €80.

Our View: Simple maths should have alerted welfare officials to homeless scam