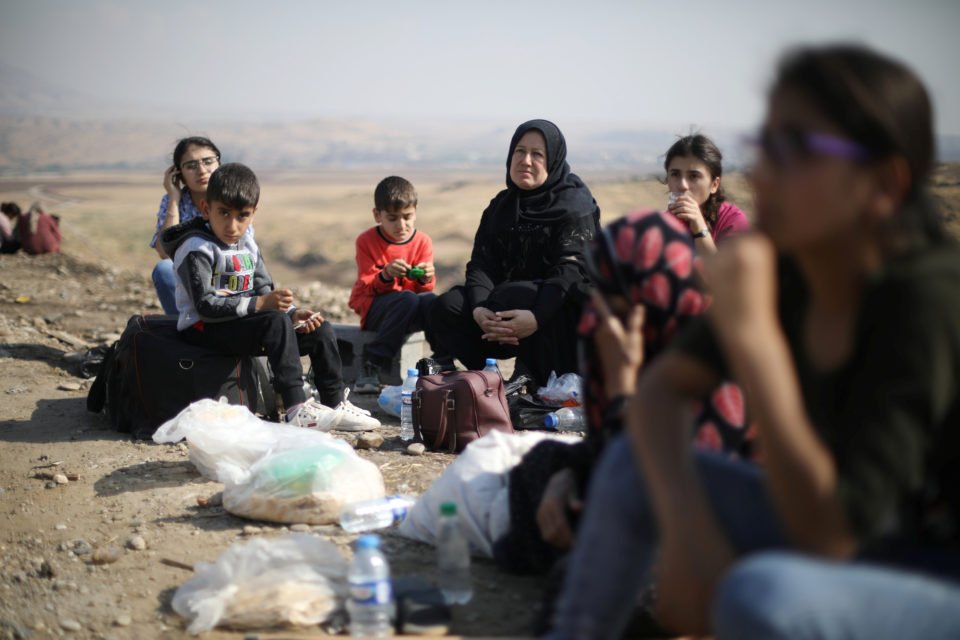 Displaced Kurds stuck at a border after a Turkish offensive in northeastern Syria, wait to try cross to the Iraqi side, at the Semalka crossing, next Derik city, Syria, October 21, 2019. REUTERS/Muhammad Hamed

By Tuvan Gumrukcu and Tom Balmforth

ANKARA/MOSCOW, Oct 22 (Reuters) – Hundreds of Kurdish forces remain near to Syria’s northeast border despite a U.S.-brokered truce demanding their withdrawal and Turkey could resume its offensive in the area when the ceasefire expires, Turkish President Tayyip Erdogan said.

The five-day truce in Turkey’s cross-border offensive to allow the withdrawal of Kurdish YPG fighters from the border area ends at 10 pm (1900 GMT) on Tuesday.

Turkey says Kurdish YPG militia forces, which it views as terrorists because of their links to Kurdish militants waging an insurgency in southeast Turkey, must leave a “safe zone” it wants to establish inside Syria.

“The withdrawal is continuing,” Erdogan told reporters at Ankara airport before flying to Russia for talks with President Vladimir Putin on Syria.

“According to the information I have received from my defence minister we are talking about 700-800 already withdrawn and the rest, around 1,200-1,300, are continuing to withdraw. It has been said that they will withdraw,” Erdogan said. “All will have to get out, the process will not end before they are out.”

The American withdrawal from Syria has been criticized by U.S. lawmakers, including some of Trump’s fellow Republicans, as a betrayal of Kurdish allies who have helped the United States fight Islamic State in Syria.

Trump said on Monday it appeared that the five-day pause was holding despite skirmishes, and that it could possibly go beyond Tuesday’s expiry, but Erdogan said the fighting may resume.

“If the promises given to us by America are not kept, we will continue our operation from where it left off, this time with a much bigger determination,” he said.

Turkey says it wants to set up a “safe zone” along 440 km (275 miles) of border with northeast Syria, but its assault so far has focused on two border towns in the centre of that strip, Ras al Ain and Tel Abyad, about 120 km apart.

A Turkish security source said the YPG was initially pulling back from the 120 km border strip. He said Erdogan and Putin would discuss a wider withdrawal from the rest of the border in their talks on Tuesday in the Russian Black Sea resort of Sochi.

Syrian and Russian forces have already entered two border cities, Manbij and Kobani, which lie within Turkey’s planned “safe zone” but to the west of Turkey’s military operations.

Erdogan has said he could accept the presence of Syrian troops in those areas, as long as the YPG are pushed out.

“My hope is that God willing we will achieve the agreement we desire,” he said before leaving for Sochi.

The Kremlin said it hoped Erdogan would be able to provide Putin with more information about Ankara’s plans for northeast Syria, and was also studying what it described as a new idea from Germany for an internationally controlled security zone in northern Syria involving Turkey and Russia.

German Defence Minister Annegret Kramp-Karrenbauer said the step should stabilise the region so that civilians could rebuild and refugees could return on a voluntary basis.

Russia is a close ally of Syrian President Bashar al-Assad. Turkey has backed rebels seeking to oust Assad during Syria’s more than eight-year-long civil war but has dropped its once-frequent calls for Assad to quit.

The U.S. withdrawal has left a vacuum into which Turkish forces have pressed in from the north, while from the southwest Russian-backed Syrian troops have swept back into territory they were driven from years ago.

There was confusion on Tuesday over the status of nearly 1,000 troops pulling out of Syria into neighbouring Iraq. The Pentagon had said they were expected to move to western Iraq to continue the campaign against Islamic State, but the Iraqi military said they had no permission to stay in Iraq.

The Equilibris Piano Trio in Paphos