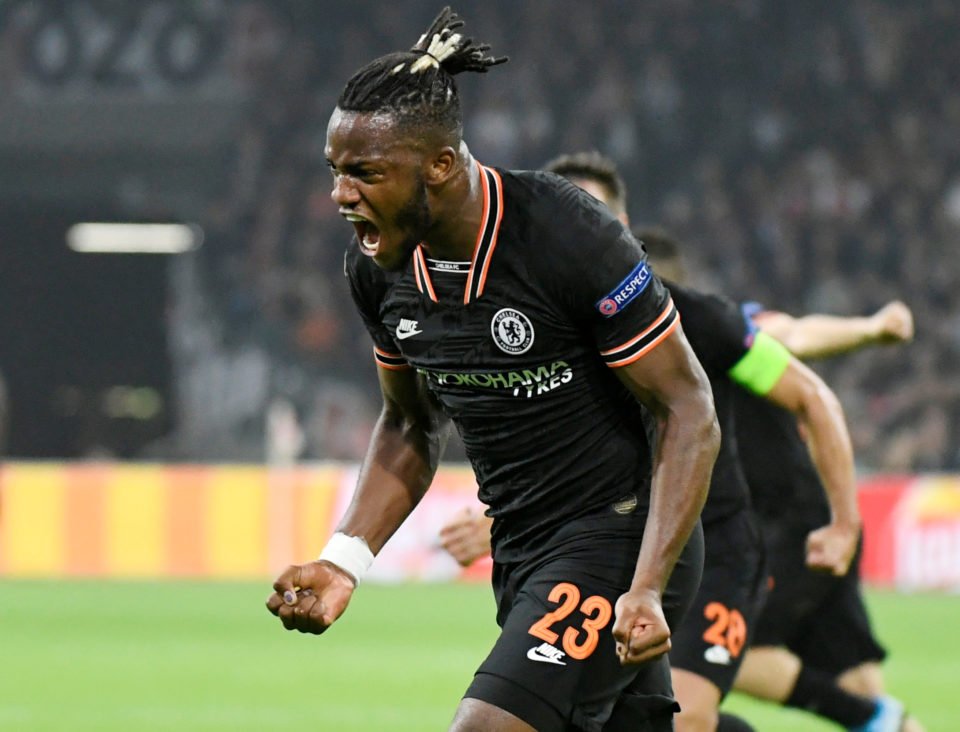 A late goal by substitute Michy Batshuayi propelled Chelsea to a 1-0 win at Ajax Amsterdam on Wednesday for a second Champions League victory in Group H after a fast and furious tussle at the Johan Cruijff Arena.

Chelsea and Ajax now both have six points at the halfway point of the six-game group campaign.

Pulisic brought added energy to the Chelsea attacks and Batshuayi finished sharply after earlier missing a seemingly easy chance just minutes after coming on as the manager’s changes turned the tide in favour of the Premier League outfit.

The two youthful line-ups produced a high tempo encounter but there were few clear cut chances in a match where the defenders generally got the better of the strikers.

Ajax had the ball in the Chelsea net after 35 minutes but VAR ruled Quincy Promes’ effort was offside.

Promes was found to be marginally off as he slid home a deflected shot from Hakim Ziyech.

To add to the home side’s frustrations, midfielder Edson Alvarez shaved the outside of the post with a glancing header from a corner just before the hour mark.

But for the last 20 minutes it was the London club who always looked to potentially break the deadlock.

Batshuayi skied the ball over the Ajax goal from close range in the 73rd minute after Pulisic’s initial effort was blocked.

The American international saw another effort miss the target before he set up the winner.

His cross from the right caught the Ajax defenders moving out of position and allowed Batshuayi to slam the ball home.

The two clubs meet again on Nov. 5 at Stamford Bridge in their next group outing.

In the night’s other early kick-off, RB Leipzig came from a goal down to beat visitors Zenit St Petersburg 2-1 on Wednesday and take back control of Champions League Group G.

The hosts, who had lost to Olympique Lyonnais in the previous matchday, almost scored after one minute when Konrad Laimer’s shot was tipped on to the crossbar by the Zenit keeper.

But it was the visitors who struck first and against the run of play when Yaroslav Rakitskyy chested down a lose ball and released from 25 metres to beat Leipzig’s goalkeeper Peter Gulacsi in the 25th minute.

The hosts, who came from a four-game winless run in all competitions, shot out of the blocks after the break and within 15 minutes had turned the match around.

Laimer made amends for his earlier miss scoring from a Marcel Sabitzer assist in the 49th. Sabitzer then turned scorer, rifling in an unstoppable shot into the top corner for what could well be the goal of the matchday in the 59th minute.

The Russians came close to an equaliser but substitute Yordan Osorio sent his shot over the bar from ten metres out.

Matheus Cunha was even more wasteful for Leipzig when he twice had only keeper Mikhail Kerzhakov to beat and both times missed the target.

Leipzig are now top of Group G on six points from three matches, two ahead of Zenit and Lyon, who face Benfica later on Wednesday.