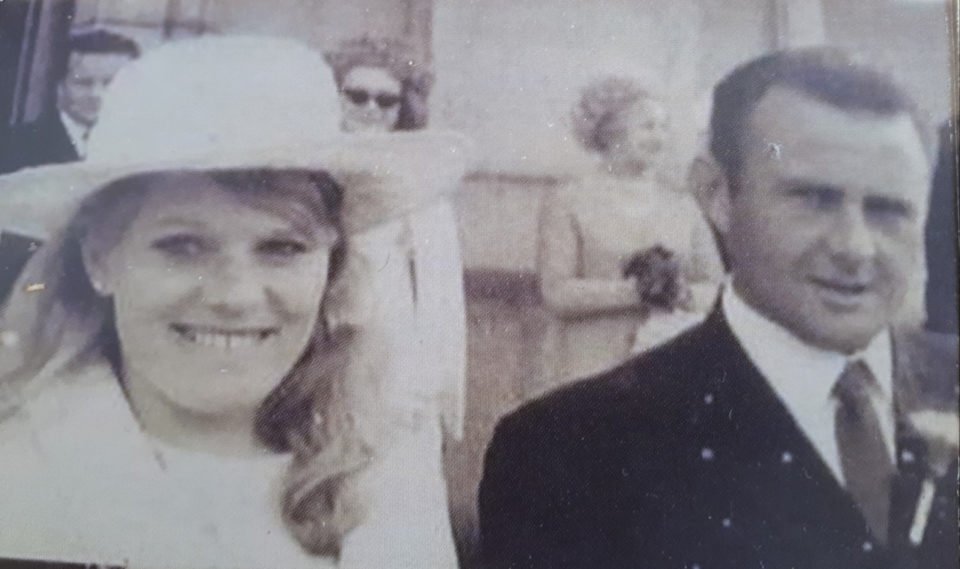 Two summers ago I flew to Dublin as guest on a TV programme connected to a previously aired series about the Irish Diaspora on which my best Irish friend and I spoke of our bereavements and friendship via Skype. His wife had died recently from cancer; I was a widow of long standing. We hadn’t met face to face in eleven years and my arrival was to be kept secret to surprise him.

For a weekend trip, I carried only hand luggage. I took two flights. I don’t know why but, during four stages, Fogey Face here was pulled out for three random searches. The German lady who ‘frisked’ me suddenly stared at me asking if I spoke German; I replied ‘A bit.’ She became amiable as I answered her non security questions and with a smile sent me onwards. What they all thought might be hidden on this old fossil, who knows.

I declined the offer of a hotel by the Irish national broadcaster RTE, as there’s a hefty birth register of cousins in the old homestead area. I asked Cousin Peter if he and his wife Ann could bear to have me on the QT. Affirmative.

Their house is set back from the centre of the village, less chance of being seen and spoiling Edgar’s surprise. I was warned by the producer that an audience can gauge a staged response from a genuine one, so gagging orders were passed on the few who knew.

I reached their door under cover of quiet darkness. Not long before my departure I had stopped to chat to neighbour Rita at her gate. Hers is a lovely family with many rescued animals including two large dogs, one was by her side. Somewhat deaf I moved in to hear what she was saying. The dog, probably fearing a threat, jumped at me. Luckily, the gate lessened the force of his bite to two very sore red drag marks down my chest. Had the gate not been there, I might have gone home minus part of my upper anatomy. The distraught woman offered to take me to a doctor. I felt it wasn’t necessary; their animals are healthy and well cared for. Profuse apologies and a gift followed.

Friday night I slept in an Irish bed and rose early to rinse out my smalls on a day gifted with sweet weather. I hung my bits on the clothes line happily drawing in the clean sea-washed air and, as I turned to go back inside, I heard a low growl from the extension Peter had built on for their large family. As I edged my way towards the kitchen, from the door of the addition wide open in the summer air, a huge black face emerged and I thought, ‘Oh, (various)! Had I narrowly missed being snack fodder via a set of fangs Dracula would die for, only to be devoured by the Hound of the Baskervilles?’

Slowly a huge body entered the light. Amazing how fast old feet can run at times like that. I banged the kitchen door shut just in time. Over a tasty, typical Irish breakfast I told Ann I’d ‘met’ their mini dinosaur. Peter laughed, ‘Buddy’s a lamb.’ letting their enormous dog in. ‘Give him a piece of your sausage,’ he grinned, ‘and he’ll be your friend for life.’ I complied and was rewarded by Buddy permitting me to give him a hug.

Ann loved to walk with her big Buddy, stretching him up the old wild and weedy unused tram line on towards the cliff. That day she took me in tow, dodging streets where we might meet Edgar or anyone who could spill the beans as to my presence. We made the cliff walk and all around us lay the beauty of a place I love so much. To our right, Dublin Bay serenely showing off its splendour in gentle light, to our left, a vista I carry always with me of the village, the harbour with its varied working and leisure craft, and the two islands that lie offshore.

Ann and I were of the same generation and I wished I had more time to walk around familiar places with this fellow strider for a while longer. Known for her generosity, lust for life and good nature, admired as a loving mother to six surviving children, people took Ann to their hearts. With Amazonian determination she battled several bouts of serious ill health.

Edgar got his surprise and we both had our 15 minutes of short-lived fame. Peter and Edgar are friends and after Mary’s death when Edgar fractured his shin bone, Ann stepped in to help. This was her last summer, one of immense suffering as cancer ravaged her slim body. She died peacefully as summer ebbed surrounded by her loved ones. In June, she and Peter had celebrated their 50th wedding anniversary and Peter’s 80th birthday. I still have that happy, vivid memory in my mind of the walk along the cliff top. Others will treasure theirs, remembering Ann.

Cyprus still lags behind in economic recovery at per capita level