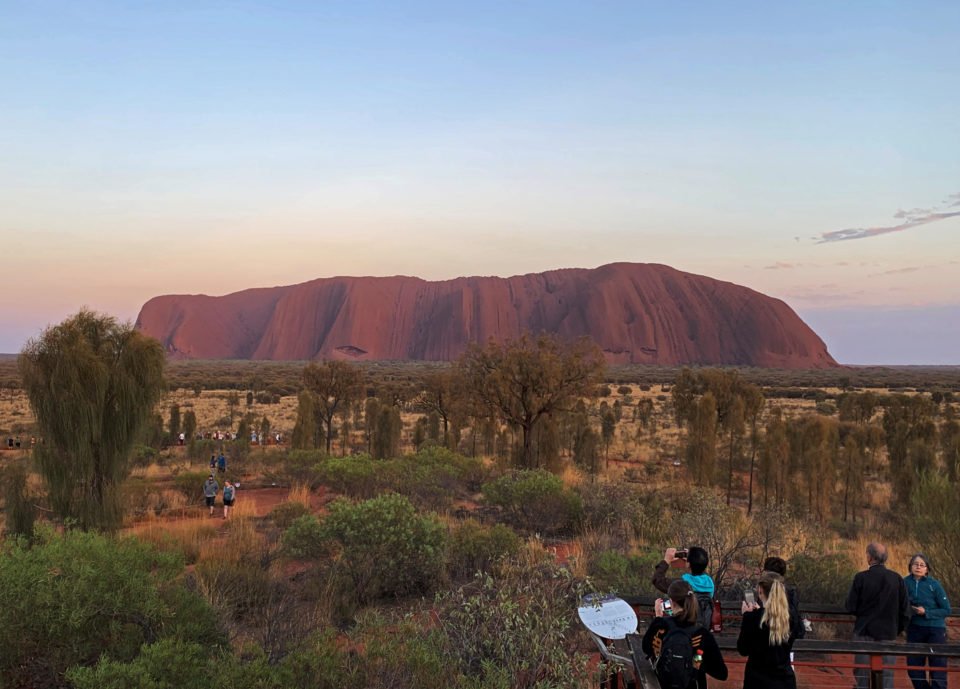 People view Uluru, formerly known as Ayers Rock, the day before a permanent ban on climbing the monolith takes effect

Hundreds of tourists clambered up Australia’s Uluru on Friday, the day before a permanent ban on climbing the sacred rock takes effect following a decades-long fight by indigenous people to close the trek.

The UNESCO World Heritage-listed 348-metre (1,142-ft) monolith, formerly known as Ayers Rock, is a top tourist draw in Australia despite its remote desert location near Alice Springs in the Northern Territory.

While most visitors do not climb Uluru’s steep, red-ochre flanks, the impending Oct. 26 ban has triggered an upsurge in people taking a final opportunity to make the trek. Nearly 400,000 visitors flocked to the Australian landmark in the year to end-June, government data shows.

Australians still make up the bulk of the visitors to climb the rock, followed by Japanese, Parks Australia says.

The Anangu people, the traditional owners of Uluru, have called for the climb to be closed since 1985, when the park was returned to indigenous control. The Anangu say Uluru has deep spiritual significance as a route their ancestors took.

“This is our home,” read a sign at the base of the rock. “Please don’t climb.”

Sonita Vinecombe, a visitor from the Australian city of Adelaide who lined up early in the morning to make the trek, said she had mixed feelings on the issue.

“You want to respect the cultural side of things, but still you want to have it as a challenge to get up the rock,” she told Reuters.

American tourist Kathleen Kostroski said she would not climb because it would be “sacrilegious” to do so.

“It’s a violation against mother nature, first of all and secondly, against the aboriginal indigenous people here,” she said.

The closure was announced two years ago when fewer than 20 percent of visitors were making the climb.

To commemorate the climbing ban the park will conduct public celebrations over the weekend.

It was an emotional day, said indigenous ranger Tijiangu Thomas.

“Happiness is the majority feeling, knowing that people are no longer going to be disrespecting the rock and the culture – and being safe.”

The Oct. 26 closure marks 34 years since the land was given back to the Anangu people, an important moment in the struggle by indigenous groups to retrieve their homelands.

Chamber of commerce to award ‘diplomat of the year’