The foreign minister is expected to contact Britain’s high commissioner in Nicosia over the private sale in a British auction house of an ancient Cypriot vase which former president George Vassiliou gave as an official gift to former British prime minister Margaret Thatcher.

After 1988 when he was president, George Vassiliou had received permission from the antiquities department to give Margaret Thatcher the vase as a state gift, his wife and former EU commissioner for health and education Androulla Vassiliou told the Cyprus Mail on Friday.

But on Wednesday art historian Maria Paphiti announced on Twitter that she had discovered the vase was sold at Christie’s auction house in May 2019 for 6,000 GBP. 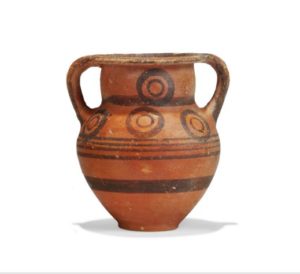 “Whilst researching #Cypriot pottery, I came across this bichrome vase that was given by President Vassiliou to Margaret Thatcher. Sold at #Christies in May ‘19, it fetched 6,000 GBP, a price significantly higher than its pre-sale estimates 700-1,000 GBP, due to its provenance #Cyprus,” Paphiti had tweeted.

“I am assuming that her children wanted to sell her possessions after her death and the vase was believed to be part of it,” Vassiliou said. “However, the ancient pottery was not given to her as an individual but should have remained at 10, Downing Street.” Thatcher died in 2013.

She added that Foreign Minister Nikos Christodoulides would be raising the issue with the British high commission in Nicosia.

The description in Christie’s catalogue stated: “A Cypriot bichrome ware pottery vessel Cypro-archaic, circa 750-600 BC, 12.6 cm high” and it is presented along with a handwritten note by Thatcher that writes “Ancient Cyprus vase/ given to me by/ President Vassiliou/ And small Hebrew/ Oil Lamps”

“We do not exactly know who consigned the object for sale. I believe this object should have remained in the collection of the British prime minister because it is the gift a president of a country to another head of a state,” said Paphiti. “To maintain it in the PM’s collection is also a matter of respect to the people of Cyprus,” she added.

According to the present British government regulations, gifts given to ministers in their official capacity become the property of the British government unless their value is below £140 when they may be kept by the recipient. Gifts of a higher value should be handed over to the department for disposal unless the recipient wishes to purchase the gift, in which case the former official is liable for any tax it may attract. It is not yet clear whether Thatcher was allowed to or chose to purchase the vase after she left office in 1990.

“My husband contacted the antiquities department and they licensed a specific vase that they had multiples of and was not particularly unique to offer as a present to Thatcher,” she said.

In later years, Tasos Papadopoulos, while serving as a president from 2003 to 2008, revised the antiquities law to specify that the president is entitled to offer Cypriot antiquities as a present to foreign political leaders or the head of international organisations or other persons, after granting an export licence. This altered law is still applied today.