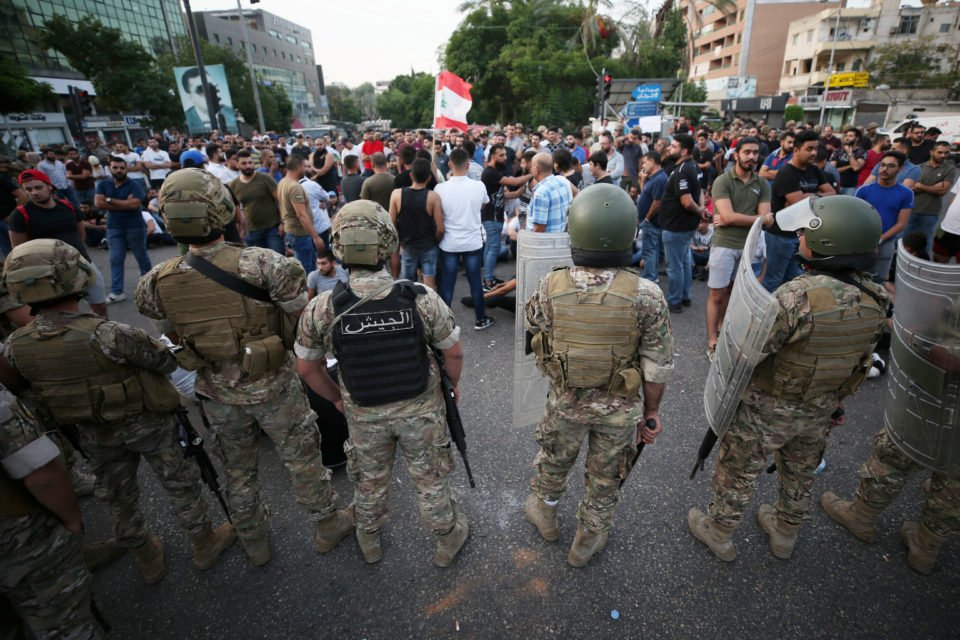 File Photo: Lebanese army soldiers stand guard as demonstrators take part in a protest targeting the government over an economic crisis in the port city of Sidon

Hezbollah warned on Friday that a power vacuum could tip Lebanon into civil war, suggesting that adversaries including the United States and Israel were seeking to exploit an unprecedented wave of demonstrations to provoke conflict.

Lebanon has been swept by more than a week of nationwide protests against a political elite accused of corruption, mismanagement of the state finances and leading the country towards an economic collapse unseen since the 1975-90 civil war.

A report from credit rating agency S&P was the latest to sound the alarm over the financial situation. Banks remain closed and have said they will only reopen when life returns to normal.

Hezbollah leader Sayyed Hassan Nasrallah, whose movement is part of Prime Minister Saad al-Hariri’s coalition government, urged his followers to stay away from the protests after they clashed with demonstrators in Beirut.

The heavily armed Shi’ite group is widely seen as the most powerful player in Lebanon and is part of an Iranian-led regional alliance that is in conflict with U.S.-allied Gulf Arab states that have political allies in the country.

Nasrallah praised the protest movement for forcing the government to agree a state budget without new taxes and “unprecedented” reforms including draft laws to lift banking secrecy, recover looted wealth and fight corruption.

But he also said the demonstrations that began spontaneously had in recent days been exploited by regional and international foes.

He reiterated Hezbollah’s rejection of the resignation of the Hariri government and any move to topple its Christian ally, President Michel Aoun, saying this would leave a void.

“In view of the difficult financial, economic and living situation in the country, in view of security and political tensions that are prevailing in the region … a vacuum will lead to chaos, to collapse,” Nasrallah said.

Referring to countrywide roadblocks, he said if Lebanon remained crippled and shut down, people including the army would not get their wages and eventually Lebanon would be plunged into complete chaos.

“I am afraid that there are those who want to take our country and generate social, security and political tensions and to take it to civil war,” Nasrallah said.

“God willing nothing like this will happen … but I tell you there is information and doubts about this matter.”

The protests took a more violent turn on Friday when groups supporting Hezbollah pushed into a peaceful demonstration in Beirut, scuffling with protesters and forcing riot police to intervene.

Several protesters were wounded in the scuffles, witnesses said. Riot police with masks and batons deployed to defuse the situation as stones and sticks were thrown.

After Nasrallah spoke, Hezbollah supporters waving the group’s yellow flag took to the streets of the southern suburbs of Beirut, the group’s stronghold.

Nasrallah urged protesters to take up Aoun’s invitation for dialogue. Aoun on Thursday suggested a cabinet reshuffle was on the table.

Credit rating agency Standard & Poor’s said the government’s limited ability to address the demonstrators’ demands could harm confidence in the banks and have an adverse effect on foreign exchange reserves.

Lebanon’s banking association has held crisis meetings with the central bank governor and president in recent days in search of a way to reopen banks amid growing fears that a rush on them could deplete already dwindling foreign currency deposits.

“Right now we’re using the pretext of the demonstrations not to open. We are afraid that when we open people will rush to withdraw their money or transfer it abroad,” said one senior banker.

He said banks were seeking a common policy to meet the needs of customers and that the central bank governor has so far avoided capital controls that would likely stop expatriates from sending remittances.

As politicians ponder ways out, the clock is ticking because of financial strains in Lebanon, one of the world’s most heavily indebted states.

Exacerbating the economic situation, capital inflows needed to finance the state deficit and pay for imports have been slowing down, generating financial pressures not seen in decades, including the emergence of a black market for dollars.

While the central bank’s foreign currency reserves were enough to service government debt in the near term, risks to government creditworthiness have risen, S&P said.

S&P said it understood that banks had imposed restrictions on U.S. dollar withdrawals.