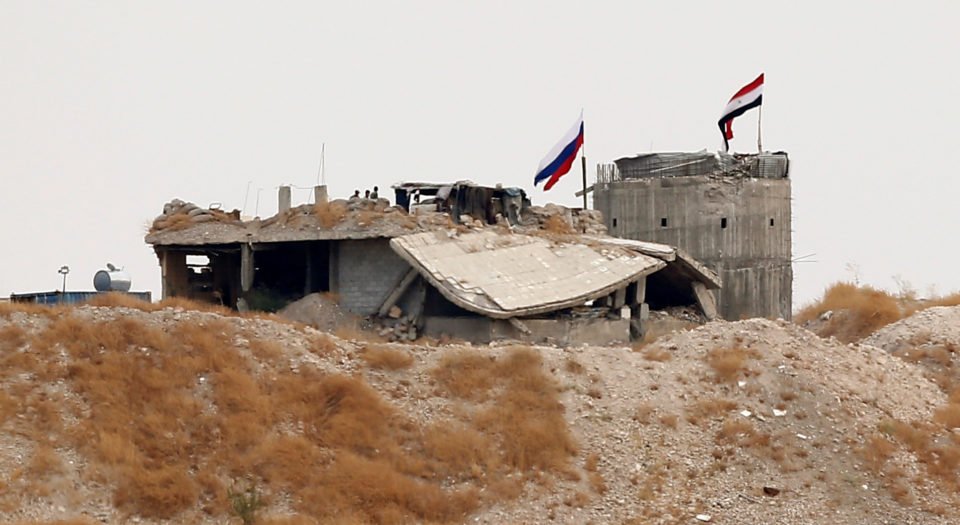 Russian and Syrian national flags are pictured near the northern Syrian village of Zor Magar, as seen from the Turkish border town of Karkamis in Gaziantep province

Russia sent about 300 more military police and more than 20 armoured vehicles to Syria on Friday under an accord between Ankara and Moscow that has halted Turkey’s military incursion into northeast Syria.

The deal, sealed on Tuesday by Presidents Tayyip Erdogan and Vladimir Putin, requires that Russian military police and Syrian border guards remove all Kurdish YPG militia from within 30km (19 miles) of the Turkish border by next Tuesday.

The military police, from the southern Russian region of Chechnya, will help with the withdrawal of Kurdish forces and their weapons to 30 km of the Syrian-Turkish border, Interfax news agency reported the defence ministry as saying.

Ankara regards the YPG as a terrorist group aligned with Kurdish militants who have waged an insurgency in southeast Turkey since 1984.

Turkey launched its offensive against the YPG on Oct 9 after President Donald Trump ordered US forces out of northeast Syria. Ankara halted its assault under a US-brokered ceasefire that called for a YPG withdrawal from the border area. The Putin-Erdogan deal built on and widened that agreement.

He repeated a warning that if Kurdish YPG forces did not withdraw from the border region they would be crushed by Turkey’s armed forces.

Under the terms of the deal, from next Tuesday Russian and Turkish forces will start to patrol a narrower, 10km strip of land on the Syrian side of the border where US troops had been deployed for years alongside their former Kurdish allies.

The arrival of the Russian police marks a shift in the regional balance of power less than three weeks after Trump began pulling U.S. forces out of northeast Syria.

It has also highlighted a growing security relationship between Russia, a close ally of Syrian President Bashar al-Assad and now the dominant power inside Syria, and Nato member Turkey.

But despite deep Western unease over Ankara’s actions, diplomats attending a Nato meeting in Brussels told Reuters the alliance had resolved to maintain military support for Turkey due to its geopolitical importance.

Turkey’s NATO allies fear its operation will cause a fresh humanitarian crisis in Syria and could allow Islamic State prisoners held by the YPG to escape and regroup.

U.S. Defense Secretary Mark Esper, in Brussels for a meeting of NATO ministers on Friday, said the United States would maintain a reduced military presence in Syria to prevent Islamic State from seizing its oil fields and revenues.

There were no reports of fresh clashes in northeast Syria on Friday, a day after the YPG-led Syrian Democratic Forces (SDF) accused Turkey of targeting three villages there despite the truce, forcing thousands of civilians to flee.

Turkey’s Defence Ministry has not commented directly on the SDF report but said five of its military personnel had been wounded in an attack by the YPG militia around the border town of Ras al Ain, near where the three villages are located.

Ankara says it takes every precaution to protect Kurdish and other civilians in areas where it targets the YPG fighters.

US senators have asked the State Department to swiftly issue a visa to Kobani, whose SDF was a key American ally against Islamic State in Syria. Ankara says Kobani was a senior leader of the Kurdistan Workers Party (PKK), designated a terrorist group by Turkey and its Western allies.

Diplomats will gather in Geneva next week for the first meeting of Syria’s Constitutional Committee, whose aim is to map a political way forward for the country after more than eight years of fighting in which hundreds of thousands have died and around half of the pre-war population of 22 million have been displaced.

Commenting on that meeting, Kremlin spokesman Peskov said: “It is already an important step on the long road towards a political settlement… The road will be long and very difficult, but we hope this first event will happen.”