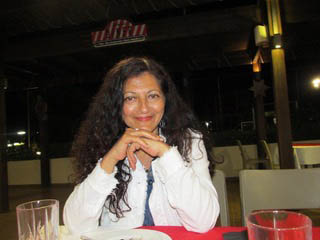 A British woman with Greek Cypriot parents, who claims to have been healed by the power of prayer, is due to feature on Sunday’s edition of the popular BBC TV programme, ‘Songs of Praise.’

Christalla Bailey told the Cyprus Mail that she tried many different treatments with a variety of doctors and alternative therapy but that nothing worked.

“I had so many things wrong with me and it all started with M.E which is also known as Chronic Fatigue Syndrome. I had Fibromyalgia, multiple chemical sensitivities, irritable bowel syndrome, tinnitus, POTS, and other issues which eventually led to heart problems,” she told the Cyprus Mail.

This meant that she would faint and turn blue.

Bailey first became unwell after her daughter was born in 1988 and was diagnosed with M.E. in 1993 after she collapsed at work.

“The illness was very debilitating, the more I tried to do, the more I couldn’t function. Eventually,I couldn’t walk or eat as my body just shut down and I was bedridden and housebound. I lost everything, my marriage, business, home and friends.”

Bailey said that many people prayed for her at this time but that, “she didn’t know God at first.”

However, she believes that her impossible journey with illness led her to God and also a miracle.

After being ill for 23 years, she said that she began to learn about God, as she believed there had to be more to life than just struggling with illness.

“The bible started to make sense and speak to me. Things like learning to forgive, and it was only towards the end of the illness, when I was dying, that I put complete faith in God, that the miracle happened.”

She said this occurred on October 4, 2011 at Ffald Y Brenin, a Christian retreat centre in West Wales.

“The programme is ’Songs Of Praise’ were interested in Ffald Y Brenin because many cases of healing and miracles happen there. In addition, two books have been written which are full of stories and they have gone all over the world. “

After a friend gave Bailey the first book ‘Grace Outpouring’ she knew she had to visit the centre. This took another year or so, as she was too ill to travel.

“The specialist told me not to travel as I was too weak and would not survive. It was that step of faith that led to the miracle and my story went into the second book ’The Way Of Blessing’,” she said.

Although Bailey was born in Cardiff, after her parents moved there from Cyprus in the 1950’s, she often visits Cyprus and feels connected to the island.

“It’s hard to believe I wasn’t born there,” she said.

Bailey and her husband currently run a healing centre in Cardiff, where they pray for others and say they have witnessed many people being healed.

“I wanted to take part in this programme is to let people know what is possible, especially those who are suffering or feeling hopeless.”

A place for contemporary choreography