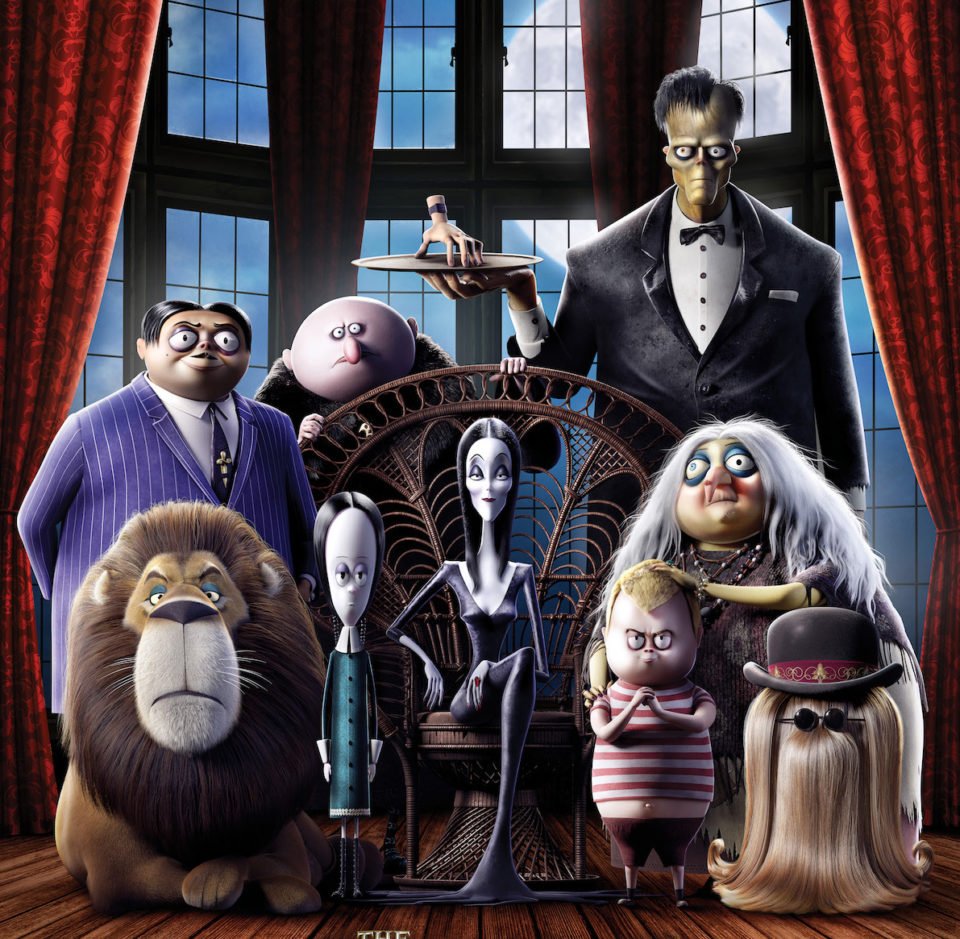 Give it up for one Matt Lieberman, a little-known screenwriter tasked with the challenge of keeping a single joke going for the course of an entire movie. Granted, the movie is only 86 minutes long, and granted, it’s a cartoon aimed at kids – but still, that’s a lot of variations to play on one joke. Fortunately, Matt was equal to the challenge, the ‘altogether ooky’ Addams family (stars of a TV series in the 1960s and two quite successful films in the 1990s, plus some Saturday-morning cartoons, a video game and a Broadway show over the years) keeping their one joke going quite enjoyably for an hour and a half – that joke being that the Addamses are freaks, ghouls, weirdos, the obverse (though not necessarily the opposite) of the clean-cut, all-American family.

The knowing reversals come thick and fast. Paterfamilias Gomez (voice of Oscar Isaac) asks a guest to “make yourself uncomfortable”. His elegant wife Morticia (voice of Charlize Theron) reminds teenage Wednesday (voice of Chloe Grace Moretz) to “kick your father goodnight” before bed. “I hope this is not a bad time,” ventures another guest; “The worst!” replies Gomez cheerfully. Lurch the butler adds dust rather than remove it, Morticia’s mascara is her own parents’ ashes. Dark is light, up is down, gross is delicious. “I call spleen!” cries thuggish little Pugsley (voice of Finn Wolfhard) at the dinner table.

The skeletal plot involves a family reunion at which Pugsley must perform a “sabre Mazurka”, the Addams equivalent of a bar mitzvah; also in the picture is a big-haired matron named Margaux (voice of Allison Janney) who carries out “design interventions” on TV and has the small town of Assimilation in her proverbial pocket. “What’s so great about being yourself / When you can be like everyone else?” sing the cheerleaders of Assimilation Junior High, the movie’s Message to the Youth being about the evils of conformism (don’t disdain others just because they look like freaks, etc) – though in fact it’s a double Message because conformism goes both ways, Gomez and Morticia turning out to be just as prejudiced when Wednesday comes home with a girly-pink unicorn clip in her hair. Why can’t we all just get along, and so on and so forth.

The plot is slight, the Message predictable. The gags, however, are inventive, constantly finding new variations (thanks, Matt Lieberman) – and the film has one splendid notion, which is to surround the clan with detritus from a century of horror movies. The original cartoons by Charles Addams traded heavily on 1930s horror, of course (Lurch – like Herman Munster in that other 60s TV show – was descended from Frankenstein’s monster), but The Addams Family spreads the net wider. The family manse has a resident ghost, as well as a child-snatching tree not unlike the one in Poltergeist. Wednesday does the famous point-and-scream ending from the 1978 Invasion of the Bodysnatchers. Pugsley’s hand emerges from a makeshift grave, like the hand at the end of Carrie. Uncle Fester’s head spins 360 degrees, Exorcist-style. Faced with frog-dissection class in junior high, Wednesday is unfazed (“I’ve done this thousands of times”), quickly rustles up a Frankenstein lab with peals of lightning – and re-animated frogs are soon zombie-walking around the room while her little classmates go “It’s aliiiive!”.

A cynic might say there was no need to remake The Addams Family, and that, if a remake absolutely had to be concocted, the least they could’ve done was to think up some new angle for it. That same cynic might point to the wastefulness of hiring well-known stars to do generic voice work, pushing the budget up to $40 million (the animation is attractive, but in no way dazzling or intricate). That cynic would be right – but the film, even in its rather basic form, is amusing, and the starry cast does include one good joke: Snoop Dogg as indecipherable, gobbledygook-spouting Cousin It, a voice credit trumping even Vin Diesel as Groot (of “I am Groot” fame) in Guardians of the Galaxy.

What else, what else? Well, Thing turns out to have a foot fetish (Thing is a hand, for the uninitiated). Lurch peruses Little Women in his spare time. Wednesday’s new friend asks “What’s your favourite filter?” (for her phone, obviously) and receives the gloomy reply “I dunno, I look black-and-white in all of them”. People on a message board take the Addamses to task for not having the app. I guess I’m reaching slightly, still it’s hard to feel ill-disposed to a film so good-natured, harmless, even borderline-witty. You had one job, Matt Lieberman. You had one job! Fortunately, you did it quite well.