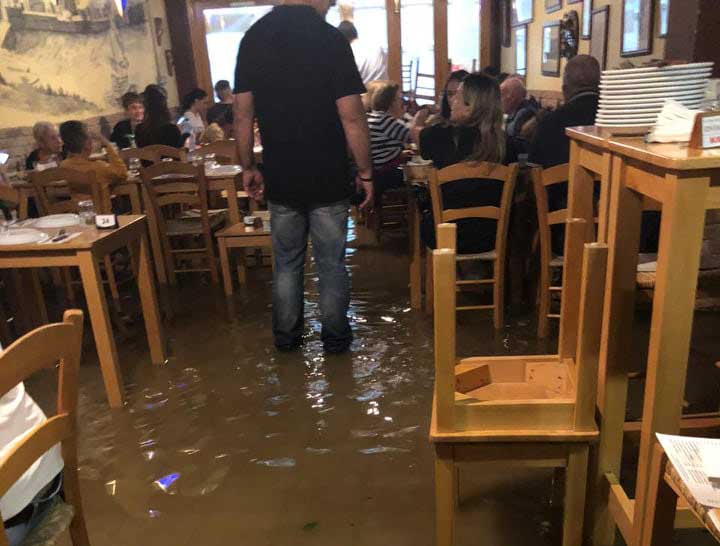 By Jonathan Shkurko and Gina Agapiou

The heavy rains that flooded streets and shops in Nicosia’s old town on Sunday afternoon have left many shop owners at a loss for the third year in a row.

The municipality sent eight groups of workers on Monday to clean the drains from mud and leaves that blocked the rainwater from passing through, but shopkeepers said the problem lies deeper in the drainage network.

Stathis, facilities manager of Epic telecommunications company (formerly MTN), told the Cyprus Mail he had spoken with the municipal workers on Monday morning about the rainwater entering their shop on Ledra street. The workers told him he had to refer to the technical services but did offer to provide him with sandbags to keep the water out of the shop.

“In August, before the rains started, we sent a letter to the municipality and they promised us to take anti-flooding measures, since the streets have got flooded for the last three years,” the manager told the Cyprus Mail.

Epic in Ledra street brought their own electrician and technician on Monday to add a steel floodgate at the entrance of the shop and check the damages.

“So much rainwater entered the shop that all of our floor boxes displaying different brands caused a short-circuit. The damages do not exceed €1,000 but there is also the loss of income from yesterday since we closed from 3pm when the rain started,” Stathis explained.

The mayor of Nicosia, Constantinos Yiorkadjis announced a plan to upgrade the drainage network in 2018.

“The municipality has prepared and approved plans, but the project was cancelled after serious objections by local shopkeepers who were concerned their businesses would be affected by the construction works,” an announcement from the municipality said on Monday.

Fanos, in charge of Anamma restaurant on Ledra street, acknowledged that the mayor had invited some of the shop owners from old Nicosia and presented the plan in a way that concerned owners, suggesting the works would close many busy streets of Nicosia for eight months.

“Our restaurant was not invited to the meeting, however, we support a partial construction, closing down 100 metres at a time, and giving the work to multiple contractors so the works can get done sooner. This way, shop owners won’t face as much damage,” he explained.

“There is a general problem with anti-flooding measures in Cyprus. We need to set priorities and focus on projects that will benefit citizens and not contractors,” he said.

On Sunday Anamma’s basement stockroom flooded and water was running from the staircase. Rainwater also entered the restaurant from outside forcing the establishment to close for a few hours to clean it up.

Halara Café in Phaneromeni Square said that apart from the rain, the smell on Monday morning was almost unbearable. “On Sunday water was flowing out of the manholes and, even though it has drained away now, the stench that it left is disgusting,” a staff member said.

Most shop owners appeared willing to close their shops for a small amount of time if it means the problem will be corrected permanently.

Perihan who works at Calzedonia on Ledra street said their stock room not only flooded yesterday but in September as well when the first rains started and in previous years.

“Something needs to get done with the drainage,” she said.

“The municipality’s technical department sucks,” said Andreas, the owner of Loxandra restaurant at Phaneromeni, who on Monday was waiting for his insurance company to come assess the damages.

“They made the underground drains smaller so that wires from Cyta and EAC can also pass through. The mayor, Costantinos Yorkadjis, does not come to old town anymore since his re-election. He wants to let the old town die because he doesn’t care.”

Loxandra restaurant flooded inside and all the chairs and tables were soaked in water for more than four hours. Two fridges also broke down.

“Every year we have the same issue. I will need more than 10,000 euros to replace all the damaged furniture,” the owner added.

“The mayor did not explain his plan to upgrade the drainage network to the shop owners. We all saw what happened with Elefetherias square. The project is ongoing for more than two years. The plan was not approved by many owners who thought they will lose business for more than a year,” Andreas said.

Nicosia municipality insisted on Monday that the problems could have been much more serious and that they had spent more than €25 million in flood protection projects in Nicosia.