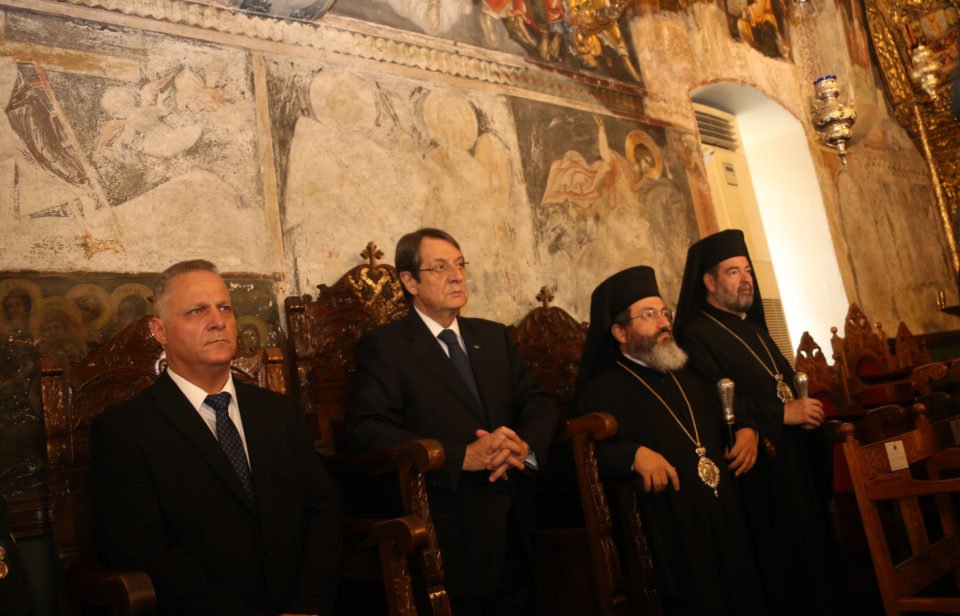 President Nicos Anastasiades said on Monday representations should made to Turkey so that it stops setting conditions for participating in reunification talks, as he reiterated that the Greek Cypriot side’s aim was to continue talks on the same basis they had been held to date.

Speaking after a church service to mark Ochi Day, Anastasiades said the internal aspects of the Cyprus problem would be dealt with by the leaders of the two communities, but there was also the integral role of the guarantor powers.

“Despite this, I see one of the guarantor powers, Turkey, setting terms regarding the conditions that would make its participation in a dialogue possible,” the president said.

He said he hoped the UN secretary-general was aware of this, and eventually the necessary representations would be undertaken “so as some people return back to earth”.

Of his planned meeting with Turkish Cypriot leader Mustafa Akinci next month, Anastasiades said the talks were of Cypriot ownership “and under this condition it is always implied that issues relating to the internal aspects would be dealt with by the leaders of the two communities”.

The secretary-general on Friday called the leaders to an informal tripartite meeting in Berlin on November 25, which could lead to a five-party conference in December that would include the guarantor powers Turkey, Greece, and Britain.

Using the example of Ochi Day, the president said Greece’s WWII victory over Italy, one of the Axis powers, showed that Greeks could achieve a lot when they are united.

“Disaster struck when there was division. And at this hour, what is required before the critical developments we are called upon to face, is to unite forces,” he added.

He said the common objective was to create the conditions that would allow the Republic of Cyprus to evolve into a European, functional state that ensured everyone’s human rights and the conditions of peaceful coexistence.

“Not turning it into the protectorate of any third power,” he said.

On Sunday, government spokesman Prodromos Prodromou said It remained to be seen whether the Turkish side would abandon its intransigent stance by the time the leaders meet in Berlin.

“The president will proceed on 25 November with clear political will and willingness to create the conditions for the resumption of negotiations. This, however, depends on the Turkish side and mainly on Turkey.”

Asked what the next steps might be he added: “Let’s not get ahead of ourselves. Fortunately, the secretary-general’s initiative is still in progress and we look forward to the fact that Mr Guterres will proceed accordingly.”

One of the world’s finest pianists in Nicosia