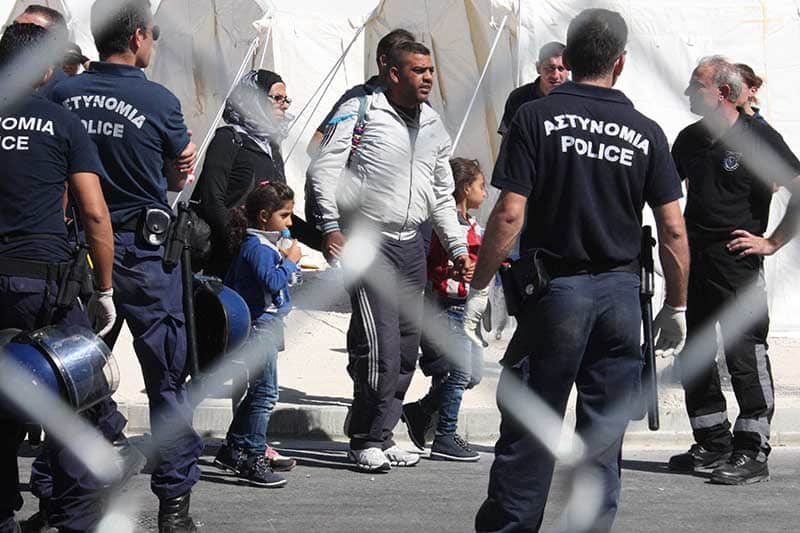 The number of asylum seekers in Cyprus is set to exceed 3.5 per cent of the population, Interior Minister Constantinos Petrides said on Tuesday, adding that migration was the leading example of the failure of a European policy.

If the current trend continues Cyprus will have 100,000 asylum seekers, refugees and economic migrants in just five years, Petrides said. “You understand what this means for a country like Cyprus,” he added.

Petrides slammed what he called the anachronistic European legal framework that allows economic migrants to abuse the system and called into question the so-called solidarity of member states when it comes to redistribution of asylum seekers.

Cyprus recently asked the EU to redistribute 5,000 asylum seekers, saying authorities could not cope with processing the increasing numbers of applicants.

Speaking at a conference organised on Tuesday by the European Parliament’s Office in Cyprus, the European Commission Delegation to Cyprus and the UN High Commissioner for Refugees on the ‘Reception and Integration of Refugees’, Petridis mentioned the 5,000 he asked the Commission to redistribute.

He had sent a letter to this effect in August, he said. However, it was not even answered, he said. “So how can we talk about solidarity?”

“We are currently experiencing the largest population displacements ever seen and according to the UN 250 million to 300 million people are migrating each year,” Petrides said, adding that around 50 million of these are recognised as refugees under the Geneva Convention.

Petrides said as long as the EU’s “anachronistic system” remained in place, the system would continue to be abused.

The number of asylum seekers in Cyprus in 2019, he said, would exceed or reach 15,000, “which is close to 1.8 per cent of the population”. This would reach 3.5 per cent if the number of those already offered protection status is included, he said. “That percentage is the largest in the EU,” Petrides said.

Comparing, he said in Italy the number was 0.4 per cent, in Spain 0.16 per cent, while for 11 other EU countries the rates were below 0.1 per cent.

“Only six countries are over 1 per cent and Cyprus has over 3.5 per cent and these all talk about solidarity,” he said.

Outlining the migration profile of asylum seekers, the minister said they were first and foremost Syrian refugees, which was something he said has had dropped off somewhat.

But he spoke of a new phenomenon that has emerged in the last three years, “mass arrivals from African countries”.

The route, he explained, was by air, first from Ankara, after which the migrants receive a three-day transit visa in the north and end up in the government-controlled areas seeking asylum. “Not many of them are refugees. These are economic immigrants who abuse or exploit this particularity,” he said.

One-third of the migrant flow, Petrides said, comes legally, either with a domestic worker’s or agricultural work permit.

“Shortly before their permits expire, some are advised to apply for asylum,” he said, adding that the state needed to improve its procedures in this area.

Petridis said the first victims of a bad asylum system were real refugees, but they were no longer the majority.

“I think immigration is the most classic example of European policy failure because while it is based on a logic that existed before 2015, it applies this legislation and logic after 2015,” said Petrides.

“Where is the European solidarity provided by Dublin Regulation? Solidarity is not money. Solidarity has a meaning other than what the EU’s creators envisioned.”

Petrides called for a convergence of efforts to resolve gaps in the Dublin Regulation, which was being debated for five years and was “a complete failure”.

Speaking about the measures that have been taken, Petrides mentioned the fact that Cyprus was the first country to recently open a permanent European Asylum Support Office that is designed to speed up the processing of asylum applications.

He said by the end of the year it would have 80 assessors to better handle applications and reduce timeframes for processing.

Cyprus is also planning a second reception centre and a separate space for the most vulnerable groups.

Petrides said that although Cyprus was one of the best in terms of absorption and management, “you cannot ignore the realities on the ground… integration”.

There was a housing problem, the minister said, and also spoke of higher rents.

He said the government would prefer to find housing for asylum seekers but due to the higher rents, this was a problem. On top of that, he said, he lives in an area comprising 90 per cent immigrants. “And I see what is happening, and I see that there is exploitation by some who are trying to persecute people and put asylum seekers in apartments to get more money. These phenomena create ghettoisation.

“Although the people of Cyprus have embraced the refugees and there have been no negative phenomena like in other countries with smaller numbers, however, there will be times when the numbers are such that one cannot easily handle the situation,” Petrides said.

“You can integrate up to a certain number but not always where there are huge numbers and separate communities are created,” he added.