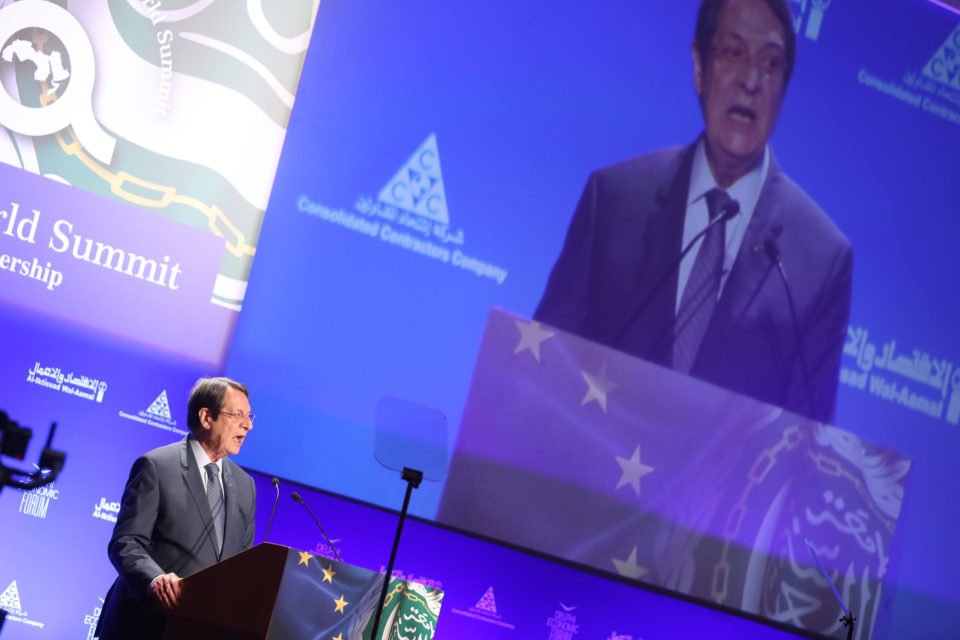 Cyprus is determined to move ahead with its energy plans and exploit its natural resources, President Nicos Anastasiades said on Tuesday during a speech at the 4th EU-Arab summit in Athens.

Anastasiades said Cyprus’ gas resources could be a source of regional cooperation, growth and prosperity.

“We are determined, despite the latest challenges, to proceed seamlessly with the energy plans of the Republic of Cyprus and to exploit the reserves of natural gas that were discovered and found, as a source of regional economic cooperation, development and prosperity,” he said.

The comment came as Turkey announced two Navtex notifications for exercises in Cyprus’ exclusive economic zone (EEZ) at the same time as Cyprus did for multinational exercises that will overlap in some areas.

The Cyprus government has never, Anastasiades said, disregarded or denied the interest of Turkish Cypriots with regards to their share of the island’s natural wealth, and the issue had been already tabled pending the resolution of the Cyprus problem.

“We do not need guarantors and guardians. We can live peacefully among ourselves and co-create for the common good,” he said.

It was the position of Cyprus and Greece that only through collective action could peace, stability and economic development be promoted, he added, referring to the trilateral partnerships Cyprus and Greece have created with neighbouring countries in the region.

“These trilateral mechanisms are a tangible example of the benefit from a wider regional dialogue including the close coordination of actions in international fora,” he said. “The partnerships we have developed do not go against any third country. On the contrary, the participation of any third country is welcomed, provided, of course, that it adopts the basic principles of international law and good neighbourly relations,” he added, referring to Turkey.

He said the different aspirations and goals of individual states “unfortunately, contribute to the prolonged instability we are experiencing in our region and the unprecedented humanitarian crisis of the millions of people displaced”.

Despite any differences or disagreements, decisive steps were needed from the European Union to take radical decisions aimed at addressing the root cause of various crises in the region, he said. Investing in North Africa would help create conditions, he said, to create jobs and stop people fleeing those countries because of wars and conflicts.

The EU also needed to tackle migration problems more effectively, through a holistic and collective approach “on the basis of the principle of solidarity and equal sharing of responsibility by all”, he said.

Greek Prime Minister Kyriacos Mitsotakis also mentioned migration in his speech, saying it was an issue that primarily affects Mediterranean countries, and suggested the issue was becoming one of expediency for some countries.

Mitsotakis also addressed Turkey’s violations of Cyprus’ EEZ and “its behaviour in the Aegean”.

“It would be good if it [Turkey] did not further charge tensions in the sensitive area of the eastern Mediterranean, and that it follow the path of international law and good neighbourly relations,” he said.

“Already, together with Cyprus, Egypt, Israel, Jordan, Lebanon, Palestine, we are promoting bilateral, tripartite and multilateral co-operation schemes on many levels,” he said. “These cooperations are open to every state that shares the same principles and values.”

Is it better to work out in the morning or the evening?